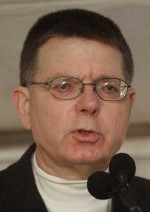 If “pro-life” vigilantes who murder abortion doctors at church services imagine they advance the anti-abortion case, their logic is as contorted as their iniquity. The suspected Wichita shooter, according to his ex-wife, is “very religious, in an Old Testament, eye-for-an-eye way.” That kind of “religious” stamps him a “Christian terrorist,” especially since radical anti-abortionists have killed ten American doctors. If this be terrorism, then shouldn’t we scrutinize how this murderer got armed, just as we interminably addressed alleged weapons of mass destruction? When do we declare war on this jihad?

Though “eye for an eye” righteousness betrays Jesus’ mercy gospel, notorious evangelicals often explain human disasters as God’s wrath, however indiscriminate. Pat Robertson justified 9/11 attacks as God’s punishment for misdeeds, ranging from homosexuality to abortion to the ACLU. Later, he broke a top Ten Commandment, proposing our government “take out” Venezuela’s Hugo Chavez because assassination is cheaper than another “$200 billion war.” Remember the buffoon who vindicated Katrina carnage as God’s anger towards pagan New Orleans? Similar delusions inform those zealots defending the killing of abortion doctors as ridding the world of “mass baby murderers.” In this context, I recall Dubya’s dogmatic dictum, “You are either with us or against us.”

Faith alone, when divorced from spirit and community, invites not just hatred but lone violence, inevitably with guns. Like all terrorism, intimidation remains the goal, not only of late-term abortion doctors, but desperate women facing dire threats and seeking legal, medical remedies. In fact, the Dr. Tiller suspect is a poster child for translating into calculated brutality the virulent rhetoric that concludes, the Lord being too slow, “vengeance is mine.”

Newsweek posits a “post-Christian” nation, even the “End of Christian America,” citing a big 10 pt. drop (to 76%) of American Christians. More reassuring still, the “no religion” demographic doubled from eight percent in 1990 to 15%, rising in every state. We’ve apparently survived overwrought 2000 millennialism as the world refused to end at one large, rounded western date. Significantly, only 48%, a low point, have kept the faith that religion “can answer all or most of today’s problems.” Compared to what – reason, science, technology?

If Not Religion, Will Guns Fix All?

Not all the news is sunny, especially the menacing surge in gun sales since Obama’s election. FBI background checks for gun buyers in April increased for the sixth straight month, overall 30% higher than a year ago. Apparently unconcerned, our president enhanced gun ownership by allowing for the first time weapons in national parks (what, to scare hungry bears?). Keep the blood from national monuments, please. In further homage to the gun religion, this administration recoiled from campaign promises to renew the assault weapons ban that expired five years ago. Even talking gun control apparently jeopardizes key Democratic votes on health care, energy and education.

Did I lurch from criminal anti-abortionists to gun sales, with much wider demographics? True, but until we find a cure (and delivery system) against enraged personalities, extremists will rely on guns to defy law and government. Upping police protection around abortion clinics will help, but our landscape remains chockablock with weapons never intended for hunting or marauders. Inevitably, must not a domestic program against terrorists, religious or otherwise, confront the millions of local weapons in our midst?

If we’ve supposedly defeated ultra-conservatives in the big cultural wars, where’s real-world “disarmament” of the radical “losers” still fighting skirmishes? Wars end when arms are surrendered, not when victory is perceived. As long as we arm those who betray American values, indeed stand against history, domestic terrorists pose a greater threat to our neighbors, school children and abortion doctors than remote fanatics stuck in caves. Like President Obama, I’m a pragmatist: we can’t stop extremists, even leaders stirring up hate, but we can restrain gun access and lower the temperature on killing.

Only more catastrophes will spur public outrage to halt assault rifle sales (the AK-47 is $599 online). Must entire abortion clinics be wiped out before officials dare raise this issue again? The quickest solution to make America less of a shooting gallery is wholesale repurchase of weapons, funded by criminal penalties. As with any sustained threat to public safety from any fundamentalist ideology, the assassination of one abortion doctor must be understood as the assassination of everyone’s rights. These are hate crimes, and crimes against women and crimes against choice. Peer pressure, especially from rational evangelicals about the limits of every religious commandment since cave drawings, represents the long-term solution. First, let’s talk again about gun control, beginning with assault rifles. An unarmed terrorist, domestic or foreign, is someone screaming in the street, not disrupting people’s lives.