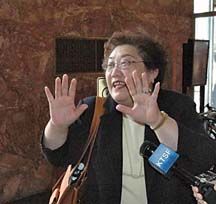 Julie Lee pled innocent to a variety of charges yesterday surrounding her role in the laundering of campaign funds for Secretary of State Kevin Shelley. The beginning of criminal proceedings has some housing advocates wondering if Lee’s far less publicized roles in two Ellis act evictions here in the city could soon join the litany of charges against her.

As reported in Beyond Chron, landlords Joseph and Alda Chan recently evicted 22 tenants from their homes at 1353 Folsom Street.

The evictions represented the culmination of years of abuse to the building’s tenants, which began when another couple, the Chengs, purchased the home in 2001. Soon after buying the building, they refused to pay the water bill until the city shut of the entire building’s water supply.

The Chengs also left a variety of repairs undone for months, including broken heaters, leaks, and cracked windows. Several notices of violations from the Department of Building Inspection had no effect until the Tenderloin Housing Clinic sued the Chengs for negligence. Only after contempt proceedings began did the Chengs start to make some repairs.

When the Chengs first bought the building, Julie Lee represented both the Chengs and the building’s former owner. Oddly enough, the Chengs were both college students, raising questions as to their ability to afford the hundreds of thousands the Folsom street building cost. In addition, Joseph Cheng claimed in a deposition during his court battle that he had never been inside the building before purchasing it.

Lee likely represented the Chengs when they sold to the Chans, though her possible role in the consequent Ellis Act eviction remains unclear.

Lee played a similar role as she played for the Chengs during the sale of another building in San Francisco that tenants rights lawyers also questioned in court due to the resulting evictions. Once again, she represented both the buyer and seller in the sale of a building purchased by people who appeared to be unable to make such a large purchase themselves. Some involved with the case believed Lee to be behind the sale and, consequently, the resulting evictions.

Now, in addition to accusations of misusing public money for campaign funds, Lee faces charges of forcing two people involved in real estate transactions she oversaw to contribute tens of thousands to Shelley’s campaign. Her misuse of power in these transactions begs a deeper investigation surrounding Lee’s role in the previously mentioned Ellis Act evictions.

Lee may have used straw figures such as the Chengs to purchase buildings and eventually invoke the Ellis Act, a loophole in state law that allows owners to evict tenants if the building is then taken off the rental market. She would have then been free to convert these buildings into condominiums and turn a large profit.

Lee’s historic treatment of tenants lends credence to the possibility. Two years ago Lee evicted a blind, elderly, disabled tenant from an Inner-Richmond flat to turn a profit converting the building into condominiums.

The eviction of the Folsom Street tenants has not been completed yet, and tenant advocates remain determined to fight it. Hopefully, an investigation of Lee’s involvement in the purchase and sale of this building could lead to the Folsom Street evictions from occurring. They certainly should be stopped if illegal doings by Lee ultimately caused them.