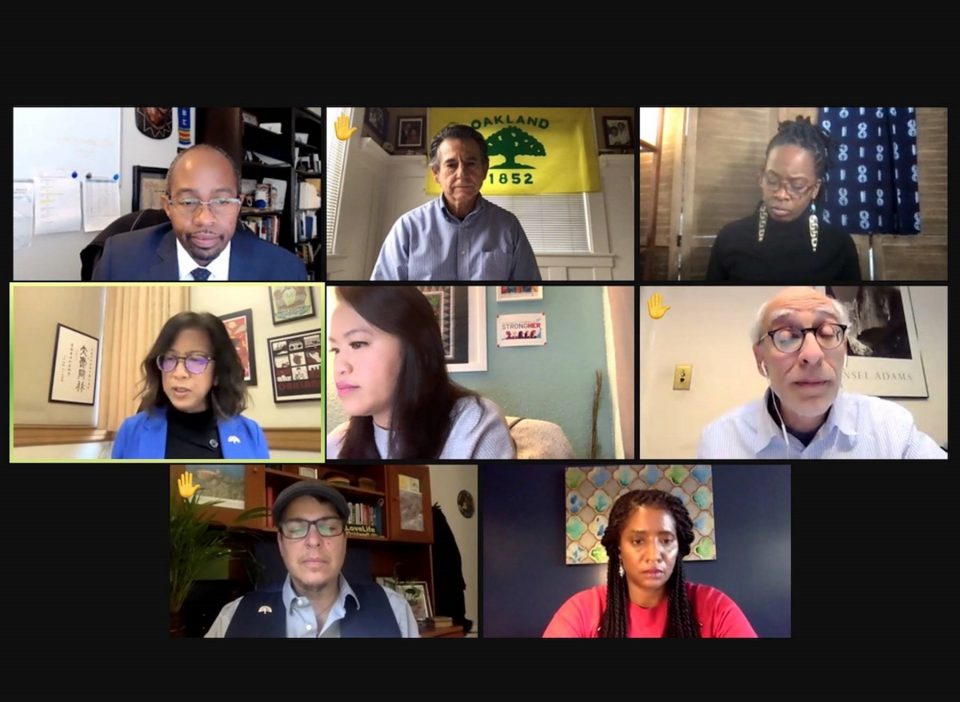 The Oakland City Council votes today on a term sheet for the A’s proposed stadium at Howard Terminal. While the term sheet is legally non-binding, the A’s have made it clear that anything but a complete agreement on the teams plans will have the team leaving for Las Vegas (or another city).

What is the Council likely to do?

Last Friday the A’s flatly rejected the term sheet the Council was prepared to approve. While Mayor Schaaf and “city officials” are still trying to make a deal happen, comments from the A’s show the team now favors moving to Las Vegas than staying in Oakland.

We got insight into the A’s mindset from Tyler Kepner’s one-sided and lazy July 18 New York Times story, which quotes no stadium critics and fails to explain the specifics behind the parties’ differences. Instead, the story features Dave Kaval gushing about the benefits of moving to Las Vegas: “It’s just a different business climate,” Kaval said. “One, there’s just a lot more sites because there’s a lot more land that hasn’t been developed. So I think you’d have that as a baseline. Two, you have a lot of people who are very interested in baseball there because it would bring a lot of tourists and really improve the local economy and generate a lot of tax dollars and economic activity.”

Kaval sounds a lot more excited about Las Vegas than he does about building an Oakland stadium..

I described last week how the A’s were “sabotaging the stadium deal.” I soon got added support for my conclusion from Alex Coffee’s story on A’s owner John Fisher, “Who is John Fisher? Billionaire A’s owner won’t talk, so we spoke to over 20 people in his orbit.”

Fisher is described by those who know him best as a stubborn man whose “my way or the highway” stadium negotiating strategy is how he treats the world. Fisher has demonstrated no interest in Oakland’s future. He has never invested in the team’s star players despite seeing the value of the franchise rise by nearly a billion dollars during his ownership (a rise attributable to MLB’s national television deals).

Fisher expects to be treated like a king. Unlike Oakland, Las Vegas will treat him like royalty. It will give him whatever he wants—that’s the type of business relationship Fisher demands.

Bay Area sports media is showing a striking lack of confidence in Fisher’s stadium plans. The SF Chronicle’s Scott Ostler has written many stories on the A’s bad faith negotiating (See, for ex, his July 16  “A’s future in Oakland grows dimmer by the day”). Ostler, Coffee and the SF Chronicle’s John Shea remind us that only Fisher finds it “not viable” to build a new stadium and thousands of housing units on the A’s current site; it’s part of the stubbornness that defines his life.

Shea favors Fisher selling the team to an Oakland-based group. But “Fisher has given no indication he wants to sell, which means the A’s could continue working as a low-rent-district outfit, even in a new ballpark generating high-rent-district revenues.” If Fisher moves the team “he’ll forever be remembered as the guy who lost the A’s, wiped out an East Bay institution and turned his back on Oakland.”

But if Fisher cared about Oakland’s needs a new stadium would have already been built at the Coliseum.

I see the City Council approving its term sheet. Members will urge the A’s to negotiate to resolve outstanding differences. But at this point the Council’s power to get a deal done is limited; Fisher sees Las Vegas as a bigger money grab.

Kaval and Fisher are visiting Las Vegas on July 21. They will then make strong pronouncements about making a deal there, citing the Council’s failure to agree to the A’s terms. The A’s will not move an inch toward the Council’s position because Fisher has already made up his mind to move the team.

I long supported the Howard Terminal location despite serious questions about transportation, stadium access, port impacts and Fisher’s failure to make a deal to close the nearby Schnitzer Steel. But the A’s opposition to meeting affordable housing requirements and to back the city’s infrastructure financing plans exposed their bad faith. Fisher and Kaval are almost desperate to justify escaping the stadium deal.

I feel terrible for loyal A’s fans. But Oakland does not need the A’s to be a “world-class” city. Nor will the city’s housing, education, and crime problems be solved by giving the A’s carte blanche for building on their chosen Howard Terminal site.

Oakland already got suckered by Al Davis into making a terrible deal for the city. The current Council won’t let the city get played by a professional sports team again.