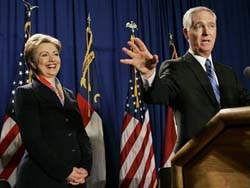 As recently as mid-March, Barack Obama and Hillary Clinton were arguing over health care, NAFTA, Iraq, and which candidate could best deliver progressive change. But the campaign’s tone has since changed, with major emphasis now placed on the social views of the candidate’s supporters. Not surprisingly, the media has exempted John McCain from this new focus, so he has not been forced to repudiate Pastor John Hagee despite the latter’s publicly expressed anti-Catholic views. But even Hillary Clinton has gotten a free pass. On Tuesday April 29, Clinton received a widely publicized endorsement from an elected official who claimed that Hillary “makes Rocky Balboa look like a pansy.” Yet the media has not even asked Clinton to repudiate this blatantly homophobic comment.

Nobody at the endorsement press conference asked Clinton if she supported describing gay men as “pansies.” Nor was she asked to repudiate Easley’s endorsement due to his expression of homophobic views while she silently stood next to him.

In the several hours after Easley’s comment, it remained ignored by the traditional media. It is unlikely to ever become an issue for Clinton to have to address.

Consider, however, if that same Governor had made the same comment while endorsing Barack Obama.

Clinton campaign officials would be demanding that Obama repudiate Easley’s language, and the media punditry would cite this as another example of the questionable company that Obama keeps. Clinton’s gay supporters would be apoplectic at Obama’s refusal to denounce homophobic comments made in the candidate’s presence.

For days Obama would be under pressure to repudiate Easley. Pundits would cite his failure to denounce the governor’s comments as evidence of Obama’s hypocrisy, and claim that his silence was leading super delegates to reconsider their support.

But a homophobic comment from a Clinton supporter does not fit the media’s narrative of the race. Easley’s comments will soon be forgotten, along with the Clinton Administration’s dubious record on gay and lesbian rights.