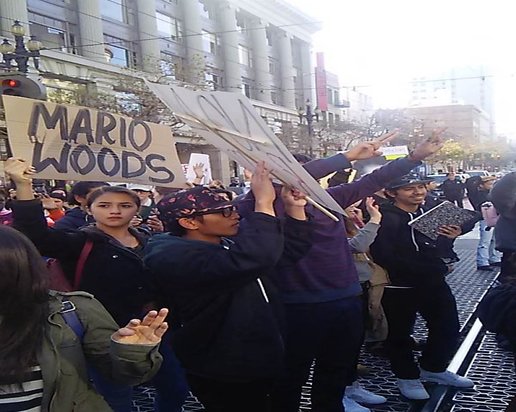 San Francisco Police Chief Greg Suhr is the most popular chief among rank and file officers in the city’s modern history. He is unusually popular for two reasons. First, having risen from Tenderloin beat cop to become Chief he knows the SFPD and its officers better than anyone. Second, he is extremely loyal to his subordinates.

It is this second ingredient—loyalty to his officers—that has put Suhr in the worst jam of his career.. Suhr’s defending the shooting of Mario Woods—“This is all they could do. I really don’t know how much more you can make it plain to a wanted felon that he should drop the knife”—struck most as unconvincing. And while some might have accepted Suhr’s claim that the officers were defending themselves based on the initial video, the one released by Woods’ family attorney John Burris on Friday undermined this belief.

The hundreds of teenagers that marched through the city and rallied at City Hall last Friday see no ambiguity in what occurred. They join what is likely now the majority view that the officers had many alternatives to killing Mario Woods.

Franklin Zimring, a UC Berkeley Law School professor and national expert on urban police departments, studied every killing of a police officer in the United States from 2008-2013. Zimring wrote in response to the Woods shooting, “There was never any attack with a knife that killed an officer unless he was alone with his attacker, and there was never a fatal attack when the officer and the attacker were any distance apart. Based on these statistics, the death risk to the officers in the Woods encounter was zero. ”

In addition to being the most popular police chief in modern San Francisco history, Greg Suhr is also the most politically astute. He had an immediate policy answer to the Woods shooting that not coincidentally fit perfectly with his own agenda: give the SFPD tasers so they have an alternative to guns.

The SF Police Commission has rejected tasers because they are likely to increase the wrongful use of police violence. Those officers with the poor judgment that killed Mario Woods are not likely to make more intelligent decisions using tasers or stun guns.

Suhr’s taser strategy might have worked had the more incriminating video not been released. But that’s no longer a viable solution to the Mario Woods killing.

Suhr now must choose between loyalty to his officers and his survival as Chief. The public will not accept his continued insistence that the shooting was justified for the safety of officers, and continuing with that line will bring more protests and controversy.

Suhr faces the type of ongoing crisis that brought down the seemingly safe Chicago Police Chief Garry McCarthy. He can only defuse this by using the new video to justify coming down hard on the officers. Suhr needs to throw the case over to District Attorney Gascon so that public anger can shift to demanding a criminal prosecution of those involved in the shooting.

When community anger boiled over after the March 21, 2014 shooting of Alex Nieto, I recall thinking that Chief Suhr’s position was not at risk because he was as politically invulnerable as any city official. But #BlackLivesMatter has changed this dynamic.

Suhr is not at risk at being fired by Mayor Lee. And not a single Supervisor who faces a future election has called for his resignation.

But the Chief will not want to stay on if he sees himself as an obstacle to the SFPD putting this latest shooting behind it. Suhr certainly realizes that the department’s interests come first, which is why he will put his own survival and the SFPD’s best interests ahead of protecting those who killed Mario Woods.