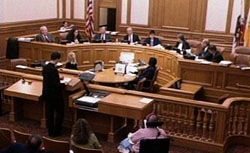 A majority of San Francisco’s Planning Commission will soon be up for reappointment. Although the Commission includes four mayoral and three Board of Supervisor appointees, Commissioner Christina Olague (whose term is not expiring) is the only member whose votes consistently reflect the Board’s progressive majority. Although voters approved the split appointment process in 2002, two of the three appointees by then Board President Tom Ammiano—Sue Lee and Kevin Hughes—have voted identically with their four Brown-appointed colleagues. Board President Aaron Peskin now has a chance to appoint two new commissioners who reflect his and the Board majority’s progressive land use views. Will he and his Board colleagues change the current business as usual attitude at Planning, or simply maintain the status quo?

A major difference between the Brown and Newsom Administrations has been the sharp reduction in public criticism of the San Francisco Planning Department and Commission by progressives and neighborhood activists. All is quiet despite the fact that the Planning Department backlog is the same, the new Planning Director, Dean Macris, was activists’ chief target during the Feinstein years, and the Commission has not voted down or even significantly modified a single major development project.

The Commission’s lack of motivation toward protecting tenants is not simply reflected by public votes. Rather, it is also seen in the freedom it has given to the city’s zoning administrator to issue anti-tenant rulings.

When the Board of Appeals rules 5-0 on tenants’ behalf because the Zoning Administrator refuses to intervene, something at the Planning Department is clearly amiss

Other than Commissioner Olague, the current Planning Commission has little connection with the city’s progressive community.

Kevin Hughes, a Board appointee whose term expires in June, works for the San Francisco Building Trades. Hughes has no roots in the city’s progressive community or links with neighborhood groups, and when appointed four years ago appeared to have no knowledge of the Planning Code. Hughes has something good to say about virtually any proposed development, regardless of its impact on tenants.
Hughes would have been a fine appointment for Mayor Brown, but he did not share the land use views of the progressive Board majority. Hughes announced last Thursday that he will not seek reappointment, which gives Board President Peskin the opportunity to create a more politically representative body.

Sue Lee is the other Board appointee who, like Hughes, would have been a fine mayoral pick but whose land use views are to the right of the Board President that appointed her and the Board that confirmed her. Lee’s community roots go back decades to her days at the Chinatown Community Development Center (CCDC), but she has spent far more time in the past 15 years working for the Chamber of Commerce and other business groups.

As much as Supervisor Peskin is reluctant to replace a Planning Commissioner from District 3, there is no shortage of candidates who could represent Chinatown and also represent the interests of tenants and neighborhood activists citywide. Lee’s had four years to impact the Commission; someone else deserves the opportunity.

The Commission’s current weakness involves more than its votes, or its reluctance to challenge staff. Bradford-Bell is the only one of the seven who would be described as outspoken, and while collegiality and professionalism is important, the Commissioners are hesitant to ask uncomfortable questions and to engage in the probing inquiries engaged in by Peskin and other Supervisors during Board hearings. Former Planning Commissioner Dennis Antenorre showed that it is possible to act effectively as a lone voice for tenant and neighborhood interests, but Commissioner Olague’s advocacy would be stronger if she had a fellow Commissioner willing to take strong progressive stands.

Who should Board President Peskin appoint? He announced last Tuesday that he will be appointing architect Kathrin Moore to replace Hughes, but little is known about her. Moore formerly worked for the nationally known architectural firm of Skidmore, Owings and Merrill, and currently serves on the Waterfront Design Advisory Committee.

Moore’s views on dwelling unit mergers, renovation projects that eliminate rent-controlled housing, and other issues impacting tenant displacement and neighborhood gentrification are a mystery. She would bring badly needed urban design expertise to the Commission, but her broader land use views must be flushed out by the Supervisors.

Perhaps because he is a self-taught land use expert, Peskin favors architects. In addition to choosing Moore he is a huge fan of Board of Appeals Commissioner and noted architect Hisashi “Bill” Sugaya. Sugaya has great technical skills, but has demonstrated little empathy for tenants.

Technical skills are important, but San Francisco’s Planning Commission needs another member with a heart. The Commission needs someone to serve as its conscience, a role that Sue Bierman performed admirably for two decades.

Peskin himself combines technical skills with a deep sensitivity toward the impact of development projects on gentrification and tenant displacement. His Commission appointments should have a demonstrated track record of exhibiting these attributes.

Since Peskin has already committed to Moore, Lee should be replaced with a strong tenant advocate. Developers and landlords always have guaranteed votes on the Planning Commission, while effective tenant backers on the Commission have been few and far between.

The Board also can improve the Commission’s representation by its approval power over the Mayor’s choices.

Shelley Bradford-Bell will not be reappointed, and its rumored that the Mayor will either not reappoint Bill Lee or that the Board will not confirm Lee if appointed. Since Mayor Newsom appointed Lee to his current city job, the perception exists that the longtime city official lacks the independence to serve as a Planning Commissioner.

When the Mayor picked a successor to departing Commissioner Boyd, he replaced one African-American with another, Dwight Alexander. Rumors are that he is following this same pattern in seeking a replacement for Bradford-Bell, which might then obligate him to replace Lee with a fellow Asian-American.

For all of the criticism leveled at Willie Brown’s Planning Commission, only one of his four appointees was rejected by the Board of Supervisors. The Board should not confirm Mayor Newsom’s appointees if they do not reflect the political diversity of San Francisco.