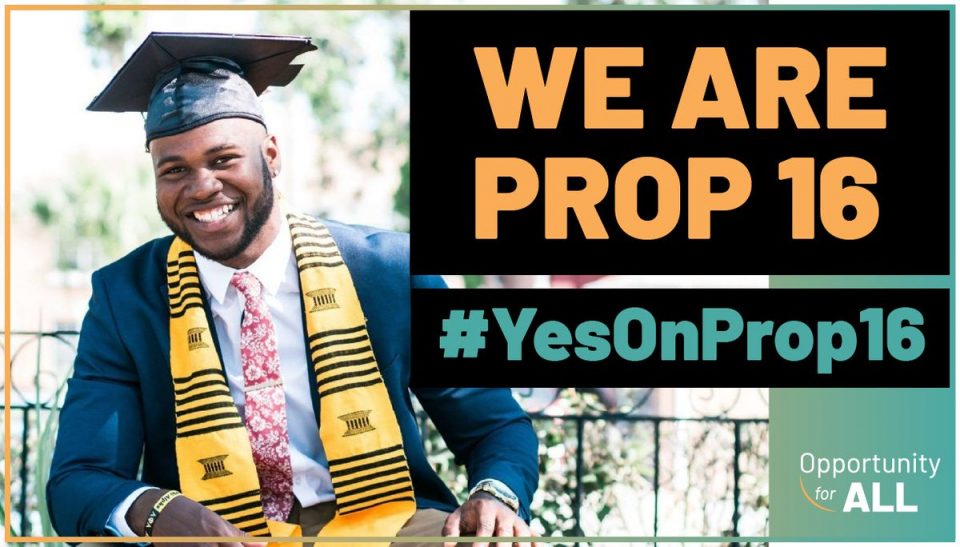 Getting the legislature to put Prop 16 on the ballot was a big victory for the Movement for Black Lives.  The action also reflected California’s sharp political shift to the left since the 1990’s. The state’s far more diverse and progressive electorate would seem primed to remove California from the list only nine states that ban affirmative action.

I had my doubts.  Affirmative action is the type of concrete action that those benefiting from white privilege still oppose. Whites have no problem with ongoing legacy admissions for whites at elite Ivy League schools or even at UC Berkeley; but many have long viewed a strategy addressing historic and ongoing racial discrimination against Blacks as “racist” against whites.

The United States Supreme Court largely agreed. Its 1978 Bakke decision barred racial quotas (UC David medical school preserved 16 of 100 spots for racial minorities) and only upheld affirmative action as a means for institutions to promote diversity, not racial justice.  Many white families were convinced that white students could not get into good colleges because these institutions were supposedly only accepting racial minorities.

Unfortunately, my fears about white opposition to affirmative action were reflected in a recent Public Policy Institute of California (PPIC) Prop 16 poll. Prop 16 has only 31% support, with 47% opposed and 22% undecided. In the progressive and racially diverse Bay Area, where you would expect at least 60% support, Prop 16 still trailed 40% – 41%, with 19% undecided.

A lot of whites have Black Lives Matter signs in their windows, but only 28% of white voters back Prop 16. These numbers should alarm all those concerned with racial justice.

As of last week’s reporting deadline, Yes on 16 had collected nearly $13 million while opponents had raised less than $1 million. Yes on 16 has been endorsed by a “Who’s Who” of California politicians, including Kamala Harris.

Yet it is losing by double digits.

According to PPIC president Mark Baldassare, “People aren’t making a connection between the racial justice issues that have certainly surfaced in the last few months and this particular ballot measure. To me that says a lot of people don’t know what it is. The proponents probably need to provide a bit of a history lesson around Prop 209.”

I wish I could agree. I would love to believe that if only white voters knew the history of systemic racial discrimination against Black and Brown residents that they would support the affirmative action remedy.

But Breonna Taylor and George Floyd have dominated the news in 2020. You can’t convince me that white voters are opposing Prop 16 because they are ignorant of past and ongoing racial injustice.

White privilege is hard to change. Many whites see themselves as “victims” of “racist” policies that give women and racial minorities a fair shake.  White privilege is routinely teamed with white victimization, the combination that helped elect Donald Trump in 2016.

I agree with Baldassare that Prop 16 has been under the radar. Prop 15 and Prop 22 are dominating the state ballot measures, and with Trump and the presidential race controlling people’s attention I think there are many voters who don’t even know reinstating affirmative action is on the ballot. After all $13 million is a tiny fraction of the nearly $200 million Uber, Lyft and their allies have collected for Prop 22.

So what can be done to turn these poll numbers around? Rescuing Prop 16 requires the highest level action. That means Michelle and Barack Obama doing ads. It means all of the prominent endorsers—such as Governor Newsom, Senator Feinstein, all of the many pro sports teams (the Warriors, Giants and 49ers have all endorsed), dozens of celebrities and corporations like Kaiser Permanente need to take a high profile Yes on 16 role.

I have been deluged with ads and social media posts for Props 15 and 22 but have barely seen anything for Prop 16. So if you are wondering what you personally can do, try using your social media postings to promote the measure.

It seems very cynical for legislators and the Governor to get credit for placing Prop 16 on the ballot when they were not equally committed to helping ensure it would win. Especially since losing big would be the death knell for affirmative action in our “progressive” state.