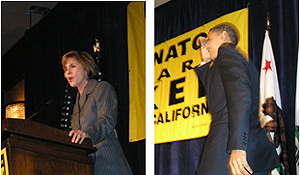 Barack Obama’s visit to San Francisco yesterday culminated with a fundraiser at the Westin St. Francis for Barbara Boxer – even though the California Senator isn’t up for re-election until 2010. While Boxer needs to prepare in case Arnold Schwarzenegger does challenge her in three years, many observers had questioned if she would use the event to endorse Obama in his Presidential bid. She did not, and even told reporters that she would remain neutral because she has “so many friends in the race.”

But statements that Boxer made at the event — as well as the substance of Obama’s speech and the crowd’s reaction to it – strongly indicate that she eventually would, and that she should endorse his candidacy. Meanwhile, the Chronicle’s coverage of the “Obama-is-not-black” myth that accompanied his visit to the Bay Area further exemplified how out of touch the newspaper is with reality.

Barbara Boxer’s political career has always been tied with the advancement of women’s rights, leading many to suspect that she will endorse Hillary Clinton – if anyone – in the upcoming Presidential race. But Boxer has never been exclusively a women’s rights politician – she has been a passionate progressive on a multitude of issues, from childrens’ health to the environment. And in recent years, she has made her mark in the Senate with her strong opposition to the War in Iraq.

It is here that her differences with Clinton are most pronounced. Whether Democrats like it or not, the Iraq War – and what to do about withdrawal — will inevitably become the greatest issue in 2008. A Boxer endorsement of Obama’s candidacy would greatly enhance his credentials – not only among California Democrats, but among a growing constituency of Americans who oppose the war and want to bring our troops home.

Last night’s event was billed as the 30th Anniversary of Boxer’s political career – as she first became a Marin County Supervisor in 1977. But in her opening speech to introduce Obama, Boxer talked about her first run for elected office in 1972, which she lost. At the time, she said, there was a war raging that nobody would stop, an environment that nobody seemed to care about, and a woman’s right to choose that was still illegal. Boxer then compared it with issues today, making it clear that her opposition to an unpopular war is still driving her political passion.

Boxer did not endorse Obama for President last night, but she did call him the “new face of a generation,” and gushed about his audacity of hope. “The people are eager to hear your message of hope,” she said. “We are all proud of you.”

I have faulted Obama for being too conciliatory, but his acknowledgement of Boxer as he came onto the stage was refreshing – and a break from the rhetoric in his bestselling book. “Barbara Boxer exemplifies the very best of politics,” he said. “She came from the grassroots, fights for the dispossessed, and someone who gets mad at injustice and unfairness. All of us need to be mad at injustice.”

The crowd may have paid money to support Boxer’s re-election, but the attention was certainly on Obama – and what he had to say in his presidential campaign. “We are here to support a friend,” said Obama, “but we are also here because our country is at a crossroads. We spend more money than ever on healthcare, but 46 million people are uninsured. Every year we tinker around the edges, and still nothing gets done.”

Obama spoke about our crumbling public schools, “where rats outnumber computers, lessons are uninspired, teachers are underpaid and results are underwhelming.” He criticized our dependence on fossil fuels that not only harm our environment, but also “fund both sides of the War on Terrorism.”

But it was Obama’s line about Iraq – “we’re in the midst of a war that should never have been authorized” – that drew far and away the largest and most sustaining applause of the night. And here is where Obama has a claim that none of the other major Democratic candidates can say. Like Boxer, Obama was against the War from the start. Like Boxer, he has the moral authority to challenge the Bush Administration where other candidates will come off as insincere. On the most important issue for 2008, and the issue that most heavily resonates with the party’s base, Obama is clearly Boxer’s candidate.

It may not be politically expedient for Boxer to endorse Obama at this early stage. With the prospect of a Schwarzenegger challenge in 2010 requiring her to raise tons of money, Boxer may fear alienating the other Democratic candidates. With California’s early primary next February, she could be the recipient of good will from other Presidential candidates – as long as she doesn’t get behind one candidate. But the salience of the War in Iraq showed at last night’s event, and her leadership on fighting the War may leave her with the inevitable conclusion to support the one who always opposed it.

Meanwhile, the attacks on Barack Obama continue. Still not satisfied with “accidental” jumblings of his name with Osama bin Laden, Fox News last week started peddling the question of whether Obama is really “black” because he is not descended from slaves. This accusation had been made against Obama once before – by Alan Keyes, Obama’s psychotic Republican opponent in the 2004 Senate race – and clearly the black community in Illinois decided who better served their interests.

Incredibly, the San Francisco Chronicle featured a front-page story on February 19th that repeated the same question – and quoted Al Sharpton (who is hardly “unbiased” since he’s competing with Obama for the nomination) as someone who does not believe that Obama is black.

Has anyone doubted Harry Belafonte’s “black” credentials because his family came from the West Indies? Or Marcus Garvey, the black nationalist leader from the 1920’s who likewise was from Jamaica? Obama may be the son of a white mother from Kansas, but like any other black man in America he has endured the constant stigma of racial profiling. His wife is African-American, and they chose to raise a family on the South Side of Chicago.

To imply that Obama is not “black” because he is not descended from African slaves is demeaning and insulting. If that’s how we’re going to judge a person’s ethnicity, we’re in trouble. The Chronicle should have known better than to take Fox News’ bait.

Meanwhile, as the presidential race heats up, the War in Iraq continues to play a salient role in the minds of voters, donors and party activists. Barbara Boxer will need to understand which candidate is a best match for her vision — and at this point, it looks like Barack Obama would be her candidate.