Will & Anthony Nunziata in Classic Performance at the Rrazz Room 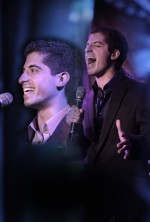 INTERVIEW AT THE RRAZZ ROOM WITH HANDSOME TWIN BROTHERS

Hey Guys – you’ve been around the world and back. But, never to my knowledge have you brought your act to San Francisco. Are you excited to do your show at the Rrazz Room in S.F.?

Will Nunziata answered: “We are so excited he said. Excited and Nervous! Many of our friends have been to the Rrazz Room and they told us that it is such a wonderful room to perform in – and that the audience’s always are very receptive.”

Where did you grow up? I know that your Italian – were you also born there? “We live in the New York area.”

“Well, we are not ALL Italian. We are 50% Italian and the rest is German and French.”

Someone asked me if you are Identical Twins? “Yes, we are. And we have a lot of fun being twins.”

A Celeb wants to know: Because you guys are Italian – would you consider yourselves to be sexy and stylish? Will got a little flustered–and really didn’t want to get into that. He suggested that I talk to Anthony about that. But here’s a tip. They are very Handsome and stylish.

I heard that you both started singing even as youngsters. How did that come about? Did your parents push you into show Biz?

“No. Singing came most natural to us. We were singing around the house all the time. Our parents encouraged it. When we were 12-years old we did Voice Jingles for Cheerios Cereal. That went on for seven years. We were very happy with it. Cheerios paid for our college. And our Parents were happy about that.”

I know that singing is your life-blood – but lets get in a movie. What’s your favorite movie this year or any year?

“My favorite Genre is Horror films. But my favorite movie of all time is “A League of Their Own. It starred Geena Davis and Rosie O’Donnell. We both really like old Disney musicals and musicals from the 40’s, 50’s and 60’s”. We love all music from the Great American Songbook and Broadway show. Our parents brainwashed us (he laughed).”

“Any C.D’s in the future? Not just yet. When we do decide to make them we would want to work with someone like David Foster.”

Just a silly question that I’m asking here: “Do you watch the Bill Mayer Show? Hint – he’s not a singer.

“I’m familiar with the name, but have never really seen his show. He’s a talk show host, isn’t he?”

Yes, but a foul mouthed one. And very funny.

You two brothers are a rave talent in New York. Do you also live there?

“Oh, we only appear in New York proper one or two times a year. We travel all over the country. And we are very fortunate to do that. It gives us a chance to hone our talents as an artist.”

What advice would you offer an aspiring performer?

“I so glad that you asked that question. I was hoping that you would ask. We are involved in the ‘Double Duty” outreach program to High Schools. We try to get the students to follow their dreams. ‘Trust in your heart’ is important to us. We both like to give back.

When you leave the Rrazz Room where will you go from there?

“We are going to be in the ‘ABC Columbus Avenue’ Parade along with singer Pia Toscano – and American Idol runner up. We are both excited about that. You can see it on TV.”