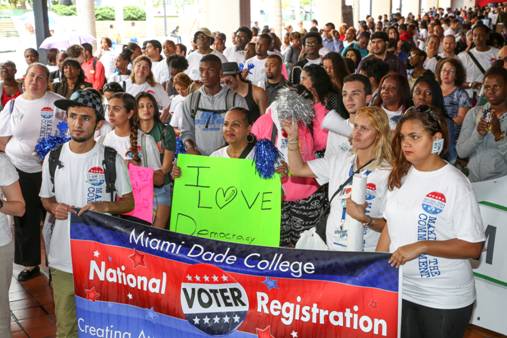 I’ve been spending the past few years focusing on the Campus Election Engagement Project, the national nonpartisan project that I founded to help America’s colleges and universities use their institutional resources to engage their students in elections. We’ve developed powerful and cost-effective approaches to help administrators, faculty, staff, and student leaders help their students register to vote, navigate ever-more-restrictive voting laws, reflect on issues and candidates, and turn out at the polls. In 2014 we worked with 280 campuses enrolling 3.2 million students, and saw partners distribute our resources to 580 additional schools. Based on 2014 precinct comparisons with 2010, when we weren’t running the project, participating campuses that we were able to measure increased their student electoral participation 16% in a year where the national youth vote dropped 17% to a record low.

We’re gearing up for an even more impactful 2016 and need your support to help hire our terrific state outreach staffers. Donations are tax deductible, and we even have a $50,000 matching grant that will double your contribution. So if you could give at even the most modest level it would make a major difference.

We need your help to engage schools in states like Colorado, Florida, Michigan, Nevada, North Carolina, Ohio, Pennsylvania, Virginia, and Wisconsin. Specifically to hire our energetic state outreach staffers. They engage as many as 50 campuses apiece, guiding and coaching their contacts, leading conversations and strategy sessions tailored to particular campus needs, and helping participants collaborate across entrenched academic silos. For instance, they help Orientation Directors register students to vote at first-year orientation, IT staffers help Presidents and Deans email election-related alerts, and student leaders and faculty team up to register students in classrooms. We’ve even helped organize football players to hold up their registration cards at half time, while the stadium Jumbotron displays a registration link for the audience.

As gatekeepers for campus resources, administrators, faculty, and staff play a prime role in our project. We complement their efforts with the passion and energy of student Election Engagement Fellows, to whom we give training, supervision, and either academic credit or $1,000 stipends to run our nonpartisan efforts on their campuses. In return, they recruit and lead teams of student volunteers to get out the vote. Our Virginia Tech Fellow, now our Virginia director, led a team that registered 3,000 voters on her campus in 2013, allowing students to participate in a race where the Attorney General ended up decided by 165 votes. We supported roughly 50 Fellows in 2014, and will add as many 2016 Fellows as we have resources to support.

As Miami Dade College’s civic engagement coordinator said about our support of a dozen Fellows to help engage their 165,000-student system:
Our students have always been passionate about wanting to be engaged, but they’re so stretched financially. Giving them the modest stipends unleashed a huge amount of energy, allowing us to develop initiatives that we’d never otherwise had the time to pursue.

But our impact goes beyond any single election, building cycle by cycle to change the culture of the schools, so that voter engagement becomes part of their ongoing institutional practice. When we sent detailed post-election surveys to our participating schools, 90% said our 2014 collaboration helped them do more to engage their students than in previous non-Presidential electoral cycles, and that we helped them engage students in more ways. The more we help them do this, the more this becomes part of their ongoing culture.

Campuses consistently describe our resources as “enormously helpful.” Here are some examples:

Closer to the election, we create and distribute non-partisan guides to candidate stands for the presidential and major U.S. Senate and gubernatorial races — guides that ranked near the top of related Google searches in the weeks before last year’s election and spent three days on Huffington Post’s front page. Schools distribute these guides through campus newspapers, campus mail and email, and through displaying them in high-traffic areas like the student union or residence halls. Students have repeatedly told us that they were enormously helpful in convincing them to vote, because otherwise “with all the ads, all the lies, you can’t believe what the candidates say, and I don’t want to vote for the wrong person.” Our lists, they say, let them see “what the candidates actually stand for,” helping them decide both who to vote for and, for many, whether to vote at all.

Because we focus on helping the colleges and universities get maximum leverage from their resources, we took a new strategic approach in 2015. Instead of waiting until 2016 to engage our schools, and risking them dissipating their hard-won momentum, we helped them stay engaged by focusing on long lead-time solutions to voting obstacles. We particularly targeted high-impact approaches that are challenging to implement in the rush of an election year, when the schools too often run out of time.

We’re now hiring state outreach staffers for 2016. And because every dollar will be matched, if we can get just 50 people to give $100 each, 100 to give $50 apiece, and 200 to give $25 each, that can cover a full-time staffer for another key state. So we hope you can help and pass the word to friends.

Please give whatever you can and invite others to support this project as well.