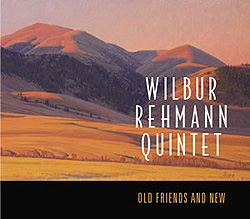 It’s no secret that saxophonist and longtime friend Wilbur Rehmann is one of my favorite musicians. No small wonder, as Rehmann draws much of his inspiration from none other than the great Sonny Rollins. I’ve had the privilege of performing with Rehmann during his annual sojourns to San Francisco, most recently at the Fillmore Jazz Heritage Center last August. Now, after a 10 year recording hiatus, (“Back Home Jazz” in 1996, and Mann Gulch Suite in 1999), Rehmann returns with what must be considered his best effort to date with “Old Friends and New“. Rejoining Rehmann are two of his longtime collaborators, the incredible father and son duo of Blackie and Ken Nelson, as well as the rhythm section of bassist Rennan Rieke and drummer Jeremy Slead. This is the Wilbur Rehmann Quintet at its finest, and well worth the wait.

I consider Rehmann and the elder Nelson, two of the “Deans of Montana Jazz”, so it seemed fitting to quote someone who knows their work back in Helena. The jazz writer Mariss McTucker accurately summed up Rehmann’s latest effort in a recent column for Montana’s “Lively Times”. McTucker writes, “There sure is a lot of good jazz being played in the Treasure State. The latest nugget of proof is the Wilbur Rehmann Quintet’s third CD. The talented Helena saxman joins forces with “the elder statesman of Montana jazz,” Blackie Nelson, on guitar; Blackie’s son, Ken Nelson, keyboards; Rennan Rieke, acoustic bass; and Jeremy Slead, drums and hand percussion. The group is joined by young Sarah Dramstad, playing tenor sax on two numbers.

Drumlummon Institute in Helena, which is dedicated to publishing and producing art created in Montana and the American West, co-produced the album. Executive director Rick Newby pays tribute to the quintet’s contributions to Montana jazz culture, including its nurturing of young musicians. “They grace our lives with their extraordinary musicianship, big hearts, and public spiritedness,” he notes.

In his intro, Rehmann says when they play, “The ideas come from us but they go out to you. This great conversation uses jazz as the language; we speak musically to each other and simultaneously to our wonderful audiences.” And do they ever. They bring up the big guns at the outset, cookin’ and honkin’ on the opener, Rehmann’s own “Sittin’ Here (Thinking About You).”

The bluesy “Beatrice,” by Sam Rivers, is next, with its cool, sleepy guitar and smooth and bending sax lead. You can’t hear Rehmann take a breath. What control! Pat Metheny’s extended piece, “Hermitage,” follows, with its bossa-nova feel. Lots of elongated melodic strains, lightly-tripping piano, and crackling drum work; everybody gets to stretch out here. I envision palm trees and a cool breeze on this one.

The finale, Metheny’s “James,” whoops it up with rolling drums and Rehmann squeakin’ and wailin’ on those dizzying lead lines. Raucous! Everyone gets to take the limelight on the album, and deservedly so. The album was recorded at St. Paul’s Methodist Church Sanctuary and superb sound engineering by Ken Nelson at Cottage Recording in Helena provides the icing on the cake. The album is a visual treat too, with its cover sporting a lush Montana landscape by painter Dale Livezey.”

I couldn’t have said it any better than McTucker did, however I will add this; like a fine wine, Rehmann and the elder Nelson keep getting better with age. I also couldn’t have picked a better bassist than Rieke, to liberate the disgustingly, multi-talented Ken Nelson from his double bass duties to play keyboards. As for Slead, what else can I say? He not only admirably holds down the groove, but even dabbles in electronic percussion, something readers of Beyond Chron know is near and dear to my heart.

There is nothing old about Rehmann and his quintet’s new interpretations of some great classics by Rivers, Matheny, Brecker and Silver. This is a passionate outing by two genuine jazz veterans and the joy of playing with their family and indeed, new friends.

Bravo Wilbur, this is the best one yet.