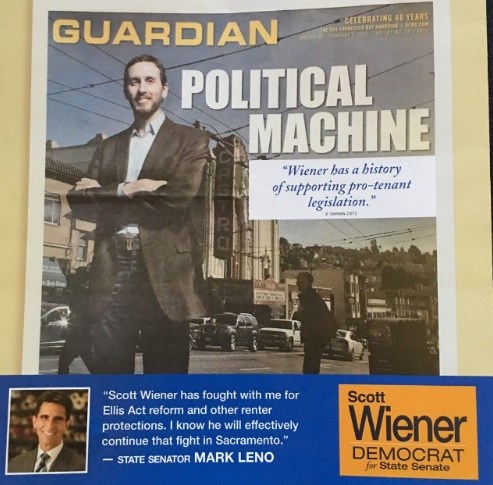 In a recent mailer for Scott Wiener’s State Senate campaign, Mark Leno states: “Scott Wiener has fought with me for Ellis Act reform and other renter protections.” That’s certainly not my recollection. Nor is it the recollection of then-Tenants Together leader Dean Preston. He and I were the two people outside of Mayor Lee’s office most engaged in the 2014 and 2015 Ellis reform efforts and if Scott Wiener had fought for Ellis Act reform we would have known about it.

I don’t know why Leno recalls Wiener  “fighting” for Ellis reform. If by “fought” it means voting with other Supervisors on a resolution urging the State Legislature to pass Ellis reform, then Wiener and Kim both get credit for waging this “fight.” But if we use the common definition of “fought” —as to “strive vigorously for or against something,”—than Scott Wiener did not “fight” for Ellis Act reform or other statewide renter protections.

Politicians should not get credit for work they did not do. It diminishes the efforts of those actually doing the work, and misleads the public. In this case, neither Wiener nor his State Senate opponent Jane Kim played a meaningful role in “fighting” for Ellis Act reform or state tenant protections.

The two year campaign to pass Ellis reform had the same chief obstacle: the SF Board of Realtors, backed by their state organization. In 2014, over 50 seniors and people with disabilities protested at the SF Board of Realtors against the group’s opposition to Ellis Act reform. Mayor Lee set up a war room to win the key votes and did everything in his power to stop local realtors from killing the bill.

Had Scott Wiener actually “fought” for Ellis Act reform, the outcome might have been different. Wiener had a much closer relationship to the real estate industry than either Leno or Mayor Lee, and he might have persuaded his real estate backers to work out an Ellis reform compromise.

But if Wiener made such efforts, they were done in secret. They remain unknown to the key players behind the bill.  What is not secret is that local realtors maintained steadfast opposition to Ellis reform in 2014 and the following year and successfully killed both bills.

Leno publicly blamed local realtors for Ellis reform’s defeat in 2015. Jay Cheng at the S.F. Association of Realtors defended his group’s opposition: “We don’t represent speculators. We represent people who are good landlords. The bill would hurt us more than they hurt speculators.”

Randy Shaw is Editor of Beyond Chron. He has been involved in every Ellis Act reform effort in Sacramento since the bill’s passage in 1986