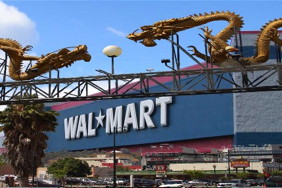 The big news in school breakfast this year is that, thanks to the Walmart Foundation, 10 more school districts are receiving a total of $5 million to increase the number of students eating a healthy meal at the start of the school day. That’s good news for kids and families in these communities, but it’s good news for Walmart too. Not only does their support of government-paid school meals for low income students help burnish the corporate image, it seems to be a necessary part of their business model, which includes paying such low wages that its employees often must rely on government assistance programs to get by.
Schools use the donated funds to purchase necessary equipment, such as carts and thermal bags, to bring the morning meal directly into classrooms for students to eat at their desks during the first minutes of the school day. The meal itself is paid for by the government-funded School Breakfast Program.

The Breakfast in the Classroom program, which last year provided $3 million in funding to 5 districts, is a partnership of the Food Research and Action Center (FRAC), the National Association of Elementary School Principals Foundation (NAESPF), the National Education Association Health Information Network (NEAHIN), and the School Nutrition Foundation (SNF); together they call themselves the “Partners for Breakfast in the Classroom.” The funding comes from Walmart.

“The Partners are working in conjunction with school nutrition leaders, state and local NEA affiliates, state principals’ associations, and local anti-hunger groups in each of the districts to implement the program.

The Partners for Breakfast in the Classroom and the participating school districts understand the important role food plays in helping our children grow into healthy and well-educated young adults,” said Julie Gehrki, senior director of the Walmart Foundation. “By working community-by-community to address the issue of child hunger at the local level, we are making changes that will benefit the lives of thousands of our nation’s children.”

Since the breakfast expansion grants are funded entirely by Walmart, and the “partners” all receive major funding from Walmart, the giant elephant in the room which everyone studiously ignores is the question, Why?

Why is Walmart so heavily involved in expanding school breakfast programs? Clearly, the company shows a preference for supporting school breakfast in its own surrounding community. On its website, Walmart describes its corporate headquarters in Bentonville, Arkansas as being “a short driving distance from a number of metropolitan areas, including Tulsa, Little Rock, Kansas City, Dallas and Memphis.” Little Rock, Dallas, and Memphis were all among the five communities chosen to share the initial $3 million Breakfast in the Classroom expansion grant in 2011.

In Arkansas, home of Walmart corporate headquarters, and over 48,000 Walmart employees, there were 122 Walmart retail units as of April 2012, according to company data. Coincidentally, a study released in June 2012 called Hunger in the Classroom, by the anti-hunger organization Share Our Strength, says that “teachers in Arkansas and those who work with higher proportions of minority and low-income students are the most likely to identify hunger as a serious issue.” The study also reports that teachers in Arkansas are among the most likely to report having a lot of students who rely on school meals for nutrition.

Little Rock, AR, a community sprinkled with Walmart locations, was one of the 5 recipient of the original $3 million Breakfast in the Classroom grants. The Little Rock school district is the largest in Arkansas, a state where about 60% of students qualify for free or reduced price meals; according to a FRAC school breakfast report, the rate in Little Rock is just under 62%.

According to company data, almost 40,000 people in Tennessee work for Walmart, and the chain has a strong presence in the Memphis area, with 9 Walmart Supercenters; an article from the Memphis Business Journal reports there are 14 Walmart grocery stores right in Memphis.

Memphis is by far the largest school district in Tennessee, with over 113,000 students. Data from 2009 paints a chilling portrait of poverty in Memphis as it affects children, with Memphis posting significantly higher poverty levels among all groups and all ages as compared to other Tennessee residents, but with school-aged children showing especially high rates. About 84% of students in Memphis public schools qualify for free or reduced price school meals.

So the obvious answer to the question of why Wamart supports expanded school breakfast is that Walmart wants to help feed poor kids in the communities where its stores are located. But is there more to it than that?

To answer that question, one first must examine the impact Walmart has on the communities where it locates. Numerous studies have linked Walmart’s arrival in a community with a reduction in jobs and lowering of wages within that community. Michele Simon is a public health lawyer and president of Eat Drink Politics, a consulting firm on food industry tactics.

She reviews many of these studies in an article entitled “Is Walmart’s March into Cities Helping or Hurting?”, and writes

In a report from last summer called “The Walmartization of New York City,” researchers at the City University of New York concluded that, “despite Walmart’s promises of jobs and lower prices for the community, the longer term impact is actually the opposite.”

Assuming Walmart opened the 159 stores needed to reach 21 percent grocery market share in New York City (the same proportion the company enjoys nationally), the impact would be a net loss of almost 4,000 jobs, and a loss of more than $453 million in wages per year for all remaining workers.

What about the new Walmart jobs? According to the report, 4,279 new low-wage Walmart workers would have to “rely on social services to make ends meet, costing New York taxpayers over $4 million per year” in health care benefits alone. This, in a city where the mayor has asked for $2 billion in budget cuts.

The effects are even greater when examined nationwide. In 2006, the St Louis Business Journal reported

A study focused on the effects of Wal-Mart stores on poverty rates found that an estimated 20,000 families nationwide have fallen below the official poverty line as a result of the chain’s expansion.

Another study found that

a Wal-Mart store opening reduces county-level retail employment by about 150 workers, implying that each Wal-Mart worker replaces approximately 1.4 retail workers. This represents a 2.7 percent reduction in average retail employment. The payroll results indicate that Wal-Mart store openings lead to declines in county-level retail earnings of about $1.4 million, or 1.5 percent.

This study details how Walmart pays its employees far less than other retailers, while providing less health insurance, and increasing the number of local residents relying on public health insurance in communities where they locate.

What emerges from these and other studies is a picture of a retailer that increases poverty in areas where it locates, ironically increasing the demand in those communities for its cut-rate priced goods. Or, as one blogger put it,

Sam Walton was a damn genius. While everyone was figuring out how to get out of poverty, Sam figured out a way to make money off of it. He located his first stores in poor, rural areas and began to discover “Hey, I can really make a killing out of this!”

In her article on Walmart’s arrival in big cities, Michele Simon wrote:

“A 2004 study found that for each of California’s whopping 44,000 Walmart employees, taxpayers had to spend $730 on health care and $1,222 on other forms of state and federal assistance such as (ironically) food stamps.”

In fact, some claim that as many as 80% of Walmart employees in some locations are also eligible for and relying upon food stamps (now called SNAP) to get by. Eligibility for SNAP benefits automatically qualifies children for free school meals.

So it’s not surprising that Walmart would be a supporter of expanding free school breakfast programs in communities like Memphis, and Little Rock, as this is just another way of shifting more of the burden of supporting Walmart employees and their families off of the employer (by, you know, paying a living wage) and onto the backs of the taxpayers (by expanding the use of a federally funded program to feed Walmart’s workers’ kids.)

Or, as an article in Dollars and Sense Magazine put it,

The company’s policies by now are notorious: wages at or close to poverty level, managers discouraged from awarding overtime, employees forced to work off the clock without pay and repeatedly denied their right to organize. The result is that many Walmart employees are eligible for myriad forms of public assistance. In other words, by providing financial assistance in various forms to Walmart employees, the federal and state governments are essentially subsidizing the corporation for its substandard wages and benefits.

Michele Simon also believes that Walmart relies on government assistance programs for its employees. She told me

I have heard from multiple sources that Walmart employs people in a manner akin to a social worker who directs employees to government assistance programs such as food stamps and Medicaid. There is no question Walmart relies on these tax-payer programs to keep from paying workers a living wage and providing benefits. This scheme is probably the biggest corporate subsidy in the retail sector.

The Breakfast in the Classroom program is already generating positive coverage in school districts where it has started this year, which may help improve Walmart’s public image. Environmental news site Grist reported last year that Walmart used a similar strategy when it launched a sustainability campaign in 2005, which it says allowed the company “to grow bigger and faster. That growth, ironically, has dramatically increased the retailer’s environmental footprint, and hurt local economies and the U.S. job market along the way.”

Let’s be clear – just because Walmart supports expanding school breakfast does not automatically mean it shouldn’t happen. After all, the Coca Cola Foundation supports playgrounds and school gardens, neither of which becomes a bad idea just because a manufacturer of cavity-inducing, empty calorie beverages supports them too.

So long as there are children who are coming to school hungry, there will be a need for school breakfast programs, and until workers are guaranteed a living wage, there will undoubtedly be hungry kids. All of which makes me wonder about what Julie Gehrki, senior director of the Walmart Foundation, said when the new round of funding was announced:

“By working community-by-community to address the issue of child hunger at the local level, we are making changes that will benefit the lives of thousands of our nation’s children.”

The $8 million which Walmart has to date invested in the Breakfast in the Classroom grants is likely a tiny fraction of what it would cost to pay their more than 1.4 million US workers enough to not need to rely on taxpayer funded programs like SNAP and school breakfast. So while the “Partners for Breakfast in the Classroom” no doubt believe that they are expanding school breakfast to benefit kids, let’s not forget that Walmart benefits too.