Why the Democrats Fail 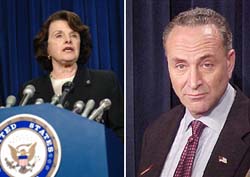 If you are wondering how Republican Presidents advance their agendas despite a Democratic Congress, a case study is New York Senator Chuck Schumer’s decision to support the confirmation of Michael B. Mukasey as attorney general. Although Schumer is chair of the committee that elects Senate Democrats and is part of the Senate Democratic leadership, he had no problem making a separate deal to support a nominee who refuses to acknowledge the undisputable fact that waterboarding is torture. The fact that most Democrats and the Senate leadership oppose Mukasey’s confirmation did not deter Schumer’s endorsement, which simply hands President Bush another political victory. Since the 1970’s, party discipline has been a given for Republican Congressional leaders, while Democrats all too often put their personal interests first. And while Democratic Presidents virtually never get support from Republican leaders on passing progressive measures, Republicans from Ronald Reagan to the widely unpopular George W. Bush secure enough Democratic leadership defections to carry the day.

Michael Mukasey’s nomination for a one-year stint as Attorney General exposes a longstanding and fundamental defect in the Democratic Party: the lack of party discipline. The problem here is not that of moderate or conservative Democrats voting their conscience and/or constituency’s interests; rather, it is of Democratic leaders making separate deals that undermine the Party’s strength and credibility.

Chuck Schumer is the third most powerful Democrat in the Senate. As the chief fundraiser for Democratic Senate campaigns, he is well schooled in political partisanship.

Yet Schumer went ahead and undercut the Senate leadership and a strong majority of his Democratic colleagues by endorsing Mukasey’s confirmation. Why?

Some would say that since Schumer initially recommended the retired New York judge for the post, he had no choice but to vote to confirm him. But Mukasey’s inadequate response to the question of torture gave Schumer a way to change his vote, but he refused to do so.

Instead, Schumer met with Mukasey privately and reported that “the judge made it clear to me that, were Congress to pass a law banning certain interrogation techniques, we would clearly be acting within our constitutional authority.”

Big deal. President Bush would veto any legislation restricting waterboarding, and Mukasey can be counted upon to rule that the practice is not torture.

Schumer also defended his backing of Mukasey on the grounds that the alternative was an acting attorney general who could be worse. But that excuse applies to all Bush nominees, yet Schumer has opposed many.

No, the real reason for Schumer’s key backing of Mukasey no doubt has its roots in New York politics. And one can be sure that Schumer will reap political and financial benefits from his support for the retired New York judge.

Unfortunately, Schumer’s action is not an isolated case. Since the days when Democratic House Ways and Means Chair Dan Rostenkowski backed the Reagan tax cuts for the wealthy in 1981, Democratic congressional leaders have cut their own deals in exchange for advancing the Republican agenda.

How else did the legendary “trickle-down” economics bill get through the heavily Democratic House? And we saw a similar abdication of leadership in the Democratic Senate in the confirmation of right-wing Supreme Court Judge Clarence Thomas.

Meanwhile, no Republican leader helped Bill Clinton shepherd through his health care proposal. None made “deals” with the Clinton Administration to pass any progressive legislation, though Clinton made his own agreements with Republicans to enact welfare “reform” and other conservative-backed measures.

First, there is no evidence that Schumer’s New York constituents wanted him to support Mukasey. Fellow New York Senator Hillary Clinton will clearly reject Mukasey, and this likely better reflects the feelings of their common electorate. Schumer’s seat is as safe as it gets, and this is not a case of a Southern or Big Sky Democrat having to vote conservatively to serve their base.

Second, unlike California’s Dianne Feinstein, Schumer is widely seen as progressive. While Feinstein’s votes to secure the Fifth Circuit appointment of racially insensitive Judge Leslie Southwick and her support for Mukasey are deplorable, this is the moderate to conservative stance she sells to voters every six years. And, unlike Schumer, Feinstein is not in the Senate leadership.

Third, Schumer’s action could be an unfortunate foreshadowing of what could occur in 2009 with Democrats controlling Congress and Hillary Clinton in the White House. In the absence of party discipline, progressive legislation on health care, immigration, global warming, and nearly every other issue could become hostage to individual Senator’s desires to play “Let’s Make a Deal.”

Nancy Pelosi has done a remarkable, if rarely appreciated job of maintaining Democratic unity on key issues in the House. But Schumer’s action makes it clear that Harry Reid cannot keep even key Democrats from acting as Lone Rangers in the Senate. With Hillary Clinton willing to engage in her own game of “triangulation,” getting the necessary votes to pass undiluted progressive legislation in 2009 could be harder than anticipated.

The Mukasey nomination gave Senate Democrats the perfect opportunity to stand their ground on the principled issue of opposing torture. By approving Mukasey, Schumer becomes complicit in the new Attorney General’s performance, and blurs the partisan divide that his own Democratic Senate candidates are counting upon to lead them to victory in 2008.