Why So Few Progressive U.S. Mayors? 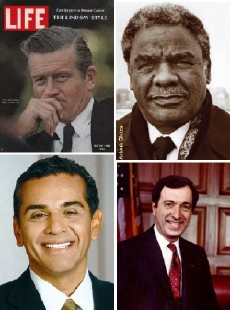 I recently watched WNBC’s Fun City documentary on John Lindsay’s tenure as Mayor of New York City (1966-73). It got me thinking why, with all the progressive urban activists and heavy Democratic concentration in cities, so few progressive mayors have been elected in high-profile urban America since the late 1960’s. And why the few elected have not maintained popularity. Lindsay and David Dinkins (1989-93) are New York’s only ostensibly progressive mayors in the past 45 years. Chicago’s only progressive mayor was Harold Washington (1983-87), who died after serving five years. Los Angeles elected progressives Tom Bradley in 1973 and Antonio Villaraigosa in 2005, but Bradley moved to the center after his first (or second) term, and Villaraigosa has greatly disappointed the left. San Francisco’s last progressive Mayor, Art Agnos (1987-1991), lost re-election. Here’s what I think is the problem.

The Feds Abandonment of Cities

First, progressive candidates develop a laundry list of public programs that energize the progressive base. But this agenda is seen as economically unrealistic by the business community and more moderate voters, who are then easily persuaded that the progressive mayoral candidate will increase their taxes to achieve their goals.

Third, as Agnos learned in 1991 and Villaraigosa in his narrow-reelection win in 2009, when federal money is not available during economic downturns, city services take a terrible beating. And the person blamed is the progressive mayor who took office promising to enhance these services, but fails to do so due to the lack of funds.

True, non-progressive incumbents are also hurt by the lack of federal funding in touch times, as Agnos’ successor Frank Jordan learned when he lost to Willie Brown in 1995. But progressive candidates and mayors raise high hopes for change among their followers that political moderates do not, and then face a much greater backlash.

Absent federal funds, progressive mayors preside over public transit cuts, rising homelessness, angry city workers, rising joblessness, vacant storefronts, abandoned development projects, and the perception that the city is going backward. And due to the coalition that elected them, progressives cannot engage in the slashing of public services used by the conservative mayors (see Giuliani, Rudolph) that follow them.

On Mayor Lindsay’s first day on the job, the New York City Transit Workers Union went out on strike, shutting down the city’s subway system. This was soon followed by a Sanitation Workers strike, which left trash stockpiling on city streets, and then a racially-divisive teachers strike.

Lindsay, a former Upper East Side Congressmember, had won election as a Republican in a three-way race and lacked much union backing. But he was a vocal critic of the Vietnam War, was strongly supported by the city’s African-American community, and was the most progressive major candidate in both his 1965 and 1969 campaigns.

Lindsay never won 50% of the vote, so he never had a “majority” base. But the attacks on the idealistic Lindsay from working-class groups that should have recognized that he was the best they were going to get is striking, particularly when we know what happened to city workers after New York City was forced to declare bankruptcy in 1975.

The progressive base also splintered under San Francisco’s Agnos. The Mayor bears much of the responsibility, but the Agnos years revealed a disappointing truth about the city’s progressive base: it includes many people whose evaluation of a mayor depends on how much power and influence he gives them.

Agnos’ insistence that government should not be run through progressive power brokers cost him dearly. The Board of Supervisors was still elected citywide in those years, and did not have enough independent progressive members to help keep Agnos’ progressive base from fracturing.

San Francisco picks a new mayor next year, and New York City in 2013. One would think that both are well positioned for progressive victories, but many wrongly anticipated that San Franciscans would prefer an entirely new direction in 2003 after eight years of Willie Brown.

Progressive mayoral candidates in both cities will face massive spending against them by the real estate industry, which is another critical factor in why so few progressives become big-city mayors. San Francisco is small enough for a truly grassroots campaign like that waged by Matt Gonzalez in 2003 to prevail, but New York City is so big that major dollars are needed to compete.

Richard Daley is Chicago’s Mayor as long as he wants, and it will take a dramatic economic turnaround for a true progressive to win the 2013 Los Angeles Mayor’s election. Boston’s Thomas Menino is now in his fifth term as that city’s progressive mayor, and cities like Portland, Oregon have also elected progressives.

But since the War on Poverty was cutback in 1966, our most nationally recognized, high profile urban mayors have only rarely come from the progressive ranks.
Perhaps by acknowledging and understanding this political reality we can help change it.