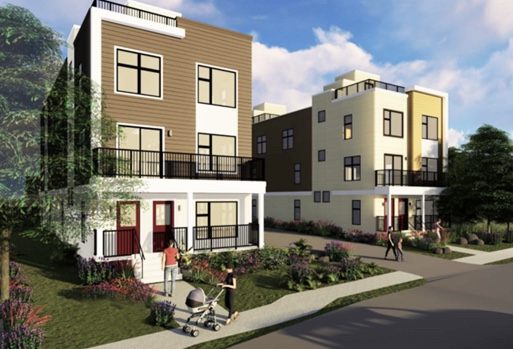 I spoke about California’s housing emergency at UC Irvine last week and came away with an unexpected insight: while measures to increase housing density like California’s SB50 are identified with millennials, senior homeowners also need expanded housing in their neighborhoods. In fact, older boomers could benefit the most from SB50’s legalizing new fourplexes and triplexes in single-family zoned neighborhoods.

This is particularly true in Orange County.

At a housing panel at the May 3 BridgesOC 2019 conference (I gave the keynote), Brian Goodell, Mayor Pro Tem of the city of Mission Viejo, lamented that many seniors in his city were “trapped” in large homes and could not afford to move. Other panelists concurred.

I have heard similar comments in virtually all of my talks about Generation Priced Out: Who Gets to Live in the New Urban America across the nation.  People bemoan how older boomers want smaller homes but cannot afford to buy in their neighborhood.  This issue came up last week when I was speaking in Richmond, a very different community from Mission Viejo.

This currently cannot happen in Orange County and other cities. Why? They live in exclusionary single family home neighborhoods that ban new fourplexes and triplexes. Even tenant cities like San Francisco prohibit such housing on more than half of their buildable land.

No wonder AARP California endorsed SB 50. The Orange County conference showed that even people running city housing programs are not aware of how SB50 addresses a major housing problem faced by an increasing number of seniors.

Considering how many seniors would love to move to multi-unit buildings in their neighborhoods, why are boomer-dominated homeowner groups the chief defenders of exclusionary single-family home zoning? I describe in Generation Priced Out how this is the case in almost every “progressive” high housing cost city.

Homeowner groups opposing fourplexes are working against the interests of older homeowners. They are denying them the opportunity to move to smaller, non-single family home options in their neighborhoods and likely forcing most aging boomers to leave their community to obtain a more suitable home.

A similar split is found with homeowner group opposition to ADU’s (in law apts). Legalizing ADU’s gives aging homeowners the opportunity to live on their same property while renting out the larger home (or having it used by family). Many aging seniors also need the income that comes from renting out ADUs. Yet boomer dominated homeowner groups often oppose ADU legalization despite it benefitting many seniors.

I got the sense from the Orange County event that some crafting the area’s housing policies are limited by outdated thinking. Such as fears that adding ADU’s to non-owner occupied would bring the dreaded duplex into single-family zoned neighborhoods. Or that cities’ should not consider affordable housing in neighborhoods that might resist it, which was conceded to be a pre-emptive (but they believe strategically savvy) nod to NIMBYs.

In addition to housing affordability Orange County biggest problems are traffic and parking. Yet some do not see how strategies for addressing these three issues are related.

David Belmer, Deputy City Manager/Planning Director for Anaheim, reported that 80% of parking in his city requires a residential permit. I was told that many apartment tenants are not eligible for these permits, so there a huge surplus of cars fighting for the 20% of parking spots that remain.

But I heard no solutions offered to this parking crisis. Panelists seemed resigned to continually adding cars despite having no place to put them and to their making the traffic problem even worse. I kept thinking that Orange County cities need to bring down Tony Jordan of Portlanders for Parking Reform to discuss innovative and environmentally sustainable solutions to their parking crisis

This reliance on outdated thinking may explain why the housing panel never raised SB50, either for praise or condemnation. Since the driving force behind SB50 is building housing on or near transit corridors both to increase affordability and reduce long car commutes contributing to climate change, it would seem a natural for Orange County.

But while SB50 is a front-burner housing issue in the Bay Area, South Bay, Los Angeles, and even Beverly Hills, it never found its way into the panel’s discussion of Orange County’s affordability crisis. It took a question about SB50 from Kimberly Adams, Regional Organizing Director of California YIMBY, for the panel to address the measure. Had Adams not explained how SB50 could address many of the Orange County problems raised by the panel, it’s likely SB50 would have been ignored altogether.

Elizabeth Hansburg, co-founder and Director of People for Housing, Orange County (and a Fullerton Planning Commissioner), asked the panel about supporting increased density near transit to reduce traffic and parking problems. But panelists seemed resigned to their cities’ untenable (and worsening) status quo.

The media is all over the story of the rising aging boomer generation. But we need a lot more coverage of how SB50 and similar measures offer longtime homeowners a lifeline to stay in their neighborhoods (and legalizing new fourplexes also reduces tenant displacement, as Sightline found in a study of Portland).

We need to end the days when seniors feel “trapped” in their homes. We need to stop forcing seniors to leave their neighborhoods to obtain housing more appropriate to their living alone.

Seniors need SB50. And homeowner groups concerned about seniors’ need to get on board.