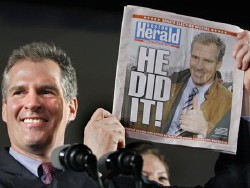 It’s been two months since Scott Brown’s surprising Massachusetts Senate victory, and Republicans might be regretting an outcome that they once saw as a turning point. Prior to Brown’s win, national Democrats were adrift, the base was deeply demoralized, and a path to finally passing health care reform was unclear. But Brown’s win changed this, providing a desperately needed wake-up call to national Democrats and the Obama Administration. President Obama is now more publicly critical of Republicans than at any time since his election, and is in a campaign mode that he would likely have delayed to the fall but for Brown’s win. Health care reform is set to be passed, the President is trying to mollify immigrant rights groups, and a series of events — Texas’ new conservative textbooks that completely distort history, Clarence Thomas’ wife forming a group aligned with the Tea Party, Chief Justice Roberts’ public criticism of the President — could well drive disenchanted Democrats to the polls in November not by their hopes, but out of fear.

It sounds hard to believe that Scott Brown’s victory was the high point rather than beginning of the Republican drive to win control of Congress in November, but this increasingly appears the case. Rather than shock Democrats with unexpected victories on Election Day — as occurred in 1994 — Republicans peaked several months early, giving Obama and the Democrats too much time to retool and relaunch their 2010 electoral agenda.

First, they have put too much faith in the Tea Party and conservative base to carry them to sweeping victories in November. Contrary to media depictions of the Tea Party as some sort of new political force, most are the same right-wing conservatives and/or Libertarians who have long comprised the Republican base.

Rather than cultivate the independents and union members who backed Brown, the Republicans have moved even further to the right. This is partially because many Republican Congressmembers face right-wing primary challenges. But the media’s inflated coverage of the Tea Party’s role in Brown’s victory, has also empowered ultra-conservatives. From the Texas Board of Education rewriting history books without input from historians, economists or sociologists (the Board is led by a dentist) to Supreme Court Justice Thomas’ wife openly aligning with a Tea Party group, to a Chief Justice criticizing a President, the right wing feels the wind at its back and is poised for victory in November.

In addition to mistakenly moving further right after Brown’s win, the GOP has deviated from their 1994 precedent by refusing to offer a specific alternative agenda, instead relying on just saying “No.” While the Party talks about a second “Contract With America” and Newt Gingrich is a highly sought speaker at conservative events, the Republican Party’s agenda is based entirely on opposition to Obama and to any new taxes.

This is a far cry from 1994, where Gingrich offered a blueprint for a different type of society. Republicans apparently fear promoting such a blueprint because it will remind voters of the Party’s policies from 2003-2006 when they controlled the government, bringing the nation financial ruin at home and foreign policy disasters abroad.

There are limits to an agenda based solely on saying “No.” Brown prevailed because he appeared to offer a middle ground between the two parties, a much different message than Republicans are offering the nation’s electorate.

Although it was obvious for months that the President’s pursuit of bipartisanship was strategic folly, it seemed to take Scott Brown’s victory for Obama to get the message. Similarly, the national Democratic Party was forced to accept that the public did not share their thrill over Obama’s first year accomplishments; Obama and the Democrats now recognize that they must deliver more tangible benefits to their base, and are already in nearly full campaign mode.

Media explanations for Brown’s victory often overlook his opponent’s failure to request help from the national Democratic Party until it was too late. By treating the Party’s base as a campaign electorate six months before the election — i.e., a constituency that can’t be taken for granted — Obama and national Democratic leaders are primed to avoid major setbacks this fall.

But the Brown victory has not changed Democratic Party timidity on a range of issues, including climate change, labor law reform, judicial and other key agency appointments, and even on health care reform. Progressives will only be swayed to act as campaign volunteers this fall either through local and state races, or by the fear that absent participation Michelle Bachmann will control the House and Tom Coburn the Senate.

I recall talking to people as late as the start of 1980 who truly believed Ronald Reagan was too right wing to be elected President. And many felt the same about the prospect of Newt Gingrich becoming House Speaker, or of George W. Bush winning in 2004.

A right-wing government can, and did, happen here. President Obama and Democratic leaders will use that recent memory to help drive Democrats to the polls in November, with Scott Brown to thank for ending their overconfidence.