Why “Narrow” Prop 8 Decision is Good for Marriage Equality 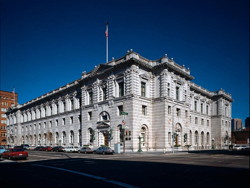 An ideologically diverse, three-judge panel on the Ninth Circuit Court of Appeals yesterday upheld Judge Walker’s decision overruling Proposition 8 – and the spin is it was decided on narrow, “only-in-California” grounds. But that’s not entirely true, and even in cases where it is marriage equality advocates should celebrate a tactical victory. Justice Stephen Reinhardt’s highly readable 80-page decision was clearly written with the U.S. Supreme Court in mind – and its heavy reliance on Romer v. Evans (1996) should be enough to get Anthony Kennedy’s vote. Many states passed anti-gay marriage initiatives, but Prop 8 was particularly offensive because it affirmatively took away a right that gay couples already had – just like Colorado did in the 1990’s with Amendment 2. While it would have been great to have the Court rule sexual orientation a “suspect class” and put Prop 8 under a strict scrutiny test, that would have made the decision far more likely to be reversed. Instead, Justice Reinhardt explains how Prop 8 had no rational basis to be constitutional – leaving the dissent to lamely argue the novel legal theory of “rational speculation.”

While the media interpreted yesterday’s Court decision as “narrow in scope” and “only applies to California,” right-wing opponents seized on this narrative to send out their spin. “The ruling is like kissing your sister,” said Matthew Staver, Founder of Liberty Counsel. “On the one hand, it is not the broad ruling sought by same-sex marriage advocates, but it also does not allow the people of California to limit the name ‘marriage’ to opposite-sex couples.”

Some supporters of marriage equality even hoped that an “only-in-California” application could mean the U.S. Supreme Court will deny certiorari and just let the Ninth Circuit decision stand – a hope that I view as just naïve wishful thinking.

It was a “narrow” decision in some ways, but consider the Ninth Circuit has a reputation for being “liberal” and the “most reversed circuit.” Justice Reinhardt wrote the majority decision in such a way that will make it harder to reverse on appeal, and marriage equality advocates should be grateful for that move.

It would have been great for the Court to find sexual orientation a “suspect class” –following the lead of state supreme courts in Iowa, Connecticut and California – thus requiring Prop 8 to pass “strict scrutiny,” and setting a groundbreaking federal precedent for gay rights. But federal courts have not made such a ruling, so Justice Reinhardt kept the decision along how Prop 8 lacks a “rational basis.”

Most interesting was how the decision devoted 13 pages to the parallels between Prop 8 and Colorado’s Amendment 2, which the U.S. Supreme Court struck down with Romer v. Evans (1996). Like Colorado’s amendment that repealed local non-discrimination ordinances, Prop 8 took the right to marry (which gay couples had just been granted six months earlier on constitutional grounds) and repealed it. “What the Supreme Court forbade,” said Reinhardt, “was the targeted exclusion of a group of citizens from a right or benefit that they had enjoyed on equal terms.”

Justice Anthony Kennedy – the “swing” vote on the U.S. Supreme Court with four liberals and four conservatives – wrote the decision in Romer, along with Lawrence v. Texas (2003) that decriminalized sodomy. Not only did the Ninth Circuit overrule Prop 8 on safe grounds that will make it harder to overturn, but Reinhardt had an eye for who would determine the outcome in a 5-4 decision.

The Prop 8 trial, presided by District Judge Vaughn Walker, was extremely valuable – not because of Walker’s legal conclusions, but instead because of its eighty findings of facts which cannot be overturned by higher courts. The Ninth Circuit cited several of them (e.g., “Prop 8 stigmatizes same-sex couples as having inferior relationships,” “the campaign in favor of Prop 8 relied upon stereotypes and unfounded fears about gays and lesbians”) that clearly affected the outcome.

But it was Reinhardt’s repeated point that Prop 8 did not just deny gay couples the right to marry – but affirmatively took it away from them which made this decision so compelling. “The context matters,” he wrote. “Withdrawing from a disfavored group the right to obtain a designation with significant societal consequences is different from declining to extent that designation in the first place, regardless of whether the right was withdrawn after a week, a year or a decade.”

Many commentators have taken this to mean the Prop 8 decision could only apply to California. But while only one state overturned a court ruling that granted marriage equality, Maine voters in November 2009 also took away the right to marry. In that case, the state legislature passed and the Governor signed into law a bill – which the voters overturned it with a “People’s Veto.” Although the law never went into effect, Question 1 was also a vote to take rights away from gay couples based on animus.

But my favorite part of the decision was where Justice Reinhardt goes through the “rational” reasons for passing Prop 8. For example, one “basis” is that the state has an interest in preventing children from being born out of wedlock – and because only straight couples can accidentally have kids, straight marriage is more favored.

If that were true, he wrote, “[Prop 8] supporters would have to argue that opposite-sex couples were more likely to procreate accidentally or irresponsibly when same-sex couples had access to the designation of ‘marriage.’” In other words, would gay marriage induce straight teenage couples to be more likely to have sex?

The Ninth Circuit also tackled the argument that voters passed Prop 8 because they feared gay marriage would be taught in schools: “schools teach about the world as it is; when the world changes, lessons change. A shift in the state’s marriage law may therefore affect the content of classroom instruction just as would the election of a new Governor, the discovery of a chemical element, or the adoption of a new law permitting no-fault divorce: students learn about these as empirical facts of the world around them. But to protest the teaching of these facts is little different from protesting their very existence.” In other words, it was a not a rational basis.

Prop 8 advocates are likely to appeal the Ninth Circuit panel’s decision to an en banc hearing – and afterwards, to the U.S. Supreme Court. So while marriage equality advocates heralded yesterday’s ruling, it is not the final say. But while it would have been great to see the Ninth Circuit issue a more sweeping denunciation of Prop 8, it was written to help us guarantee a future victory when it really matters.

Paul Hogarth has a J.D. from Golden Gate University. He is an attorney licensed to practice law in California, but this piece is not intended as legal advice. He was a summer intern for Equality California in 2005, organized volunteers in 2009 for the “No on 1” campaign in Maine, and helped live-blog the Prop 8 trial for the Courage Campaign.