Why Mayor Lee’s “C” Grade on SF Homelessness is Correct 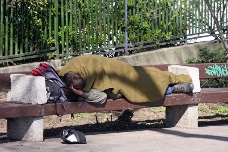 The worst advice I gave Mayor Willie Brown was when I advised him to be honest with San Franciscans about homelessness. I said that we both knew that the federal government was not doing its share, and that he should level with people that we lacked sufficient local dollars to solve the problem. Soon after, Brown publicly made this point. His reward? He was vilified by everyone from the SF Chronicle to the Bay Guardian, who denounced Brown for “passing the buck” on homelessness. That experience helps explain why homelessness went from being a central issue in the 1991 and 1995 mayoral races to its absence from every mayor’s race since. Politicians see talking about homelessness as a political loser, since the city lacks the resources to solve the problem.

Mayor Lee recently gave his administration a “C” grade on homelessness, which led the mayor’s homeless coordinator, Bevan Dufty, to respond “ouch.” But the mayor’s assessment is correct. On its effectiveness in maximizing local dollars for permanent housing, I would give the city an A-, just short of Outstanding. On its reducing the number and visibility of homeless persons with mental health problems on city streets, I would give the city a D for Needs to Improve. San Francisco has long failed to effectively deal with the most troubled of the homeless population. This group angers the public and leads many to wrongly conclude that increased spending on homelessness makes no difference. To raise the city’s grade, Mayor Lee should consider a new approach.

Discussions about homelessness in San Francisco have come to resemble talks among climate change deniers. Certain unalterable facts—such as the city’s inability to marshal sufficient local resources to “solve” homelessness, or the need to press the federal government to spend far more on permanently housing homeless people—must be ignored. Instead, we make believe that San Francisco can get everyone who desires housing within its borders into affordable housing, and that any resulting failure is the mayor’s fault.

But one area where a mayor could make a difference is in improving outreach to what some call the “chronic” homeless, but may be more accurately called people with health problems that need assistance getting off the streets.

These are the troubled and often disoriented people most often seen along Market Street, in the Tenderloin, and under freeways. Whereas other cities find ways to remove this group from the streets, San Francisco never has.

This is the group—-not the thousands successfully housed in city-subsidized SROs or the many low-income families with children unable to obtain permanent housing—that much of the public identifies as “the homeless.” And I can say from nearly thirty years of experience that so long as this much smaller, troubled and unrepresentative group persists, no mayor will get high public marks on homelessness.

I am always mystified how a person visibly suffering from health problems can remain at highly travelled intersections like Golden Gate & Hyde for the entire day. But this is common in the Tenderloin, UN Plaza and other parts of the city.

It is hard to assess how many city funded outreach workers are directly involved helping people get off the streets, but there are not nearly enough. And that leaves the job of removing people sprawled out in front of businesses to police, who have more important priorities.

Why does San Francisco lack outreach workers when we (usually) have shelter space and services to help this troubled population? The answer is the same: a lack of funding. And as someone who backs the Housing First strategy and who heads an organization (the Tenderloin Housing Clinic) that provides permanent housing to homeless single adults, I support the city’s prioritization of housing as the chief exit from homelessness.

But must financially strong San Francisco really choose between permanent housing and helping troubled get off the streets? Is the latter really such a low public priority?

I do not understand the logic of a program that places people from the streets into 300 SRO rooms per night to “stabilize” them not just for a few days or a week, but for six months and longer. This worsens homelessness by removing permanent SRO units from the scarce housing market. The program was also providing a guaranteed income stream to some of the city’s worst maintained SROs (a problem that the Health Department says it has since corrected).

I wish I could tell you how much money the Health Department spends on its stabilization program, but it has refused to provide the total budget. It’s an off the shelf operation (which is how it began under Mayor Newsom before expanding to 300 rooms per night) that has avoided programmatic or budget scrutiny for years.

Repurposing stabilization funds could redirect the outreach program toward focusing on getting people off the street today rather than on their stabilization over six months. But the Health Department will make no changes unless the mayor intervenes, which he will have to do if he wants to implement the type of street outreach priorities that most San Franciscans support.

Since the Mayor himself is dissatisfied with the city’s approach to dealing with people with mental health problems on the streets, and the public agrees, why is there no action? Two reasons.

First, the local money is not there to provide all the services needed by the above population, so Mayor Lee would embark on a critical drive for which he will be unable to claim complete victory. That’s why Gavin Newsom did not prioritize street outreach after his success with Care Not Cash; he quit while he was ahead.

Second, Lee will be criticized from the right and left for addressing this longstanding problem. Conservatives will claim it is too expensive and that the mayor is elevating the city’s reputation as a “magnet” for the downtrodden. Some homeless activists oppose any concerted efforts to pressure people to leave the streets, and will identify even the best intended approach as the second coming of Frank Jordan’s notorious “Matrix” program (critiqued in the 1995 mayor’s race by giant posters of a sprawled out drunk below a Jordan sign saying, “Matrix is Working”).

I’ve learned my lesson about advising mayors’ on homeless policy. But if Mayor Lee wants to raise his grade above “C,” he can start with far more effective street outreach.

Randy Shaw is Editor of Beyond Chron, which is published by the Tenderloin Housing Clinic. He discusses San Francisco’s battles over homelessness in his new book, The Activist’s Handbook, Second Edition: Winning Social Change in the 21st Century