Why Jon Stewart Is Wrong 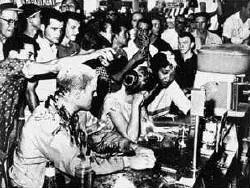 At the close of last Saturday’s “Rally to Restore Sanity,” Jon Stewart argued that Americans are not as divided as the media depicts, and that people of differing views “work to get things done every dammed day!” Stewart urged us to distinguish between “real racists and Tea Partiers,” and analogized the country to cars merging in traffic, where the “selfish jerk who zips up the shoulder, and cuts in at the last minute” is “rare” and is “scorned.” Stewart’s comments were heartfelt, and struck a chord with many. But he is wrong. America is not threatened by isolated “selfish jerks,” but by an organized cadre of wealthy individuals and powerful corporations whose agendas are far more destructive to other people and the planet than a selfish driver. And while Americans do “get things done every dammed day,” the same could be said about life in the American South prior to 1964 – when millions of personally very nice and cooperative people enforced legal segregation and discrimination against African-Americans.

I like Jon Stewart, and appreciate his efforts to integrate politics and comedy. But his core argument – that the media falsely labels people as racists, and magnifies differences between Americans while downplaying how they work together – is overly simplistic and fundamentally wrong.

While Stewart wants to exempt tens of millions of Americans (including current and potential viewers of The Daily Show) from being labeled “racist,” it is hard to understand why he would want to otherwise characterize those backing the pervasive vicious campaign attacks on Latino immigrants, as well as the millions of Republicans who still doubt President Obama’s country of birth.

By Stewart’s accounting, there were likely barely racists at all in the American South from the nation’s founding through 1964; slavery and legal segregation and discrimination were apparently entirely the work of “selfish jerks” like George Wallace who manipulated the public.

People like Stewart who knew better made apologies for racism then, and are still doing so today. Stewart may believe that suppressing racial realities helps people work together more cooperatively, but it sure doesn’t “work” for the victims of discrimination.

Does Stewart really believe the media should not address the racially charged appeal of the Tea Party? Stewart’s definition appears to limit racism to those enrolled in white supremacy groups, affiliations the vast majority of Southerners lacked while ensuring that blacks moved to the back of the bus.

Stewart saw the same Frank Capra films that I did, and understandably yearns for an America where we can all put aside differences and unite for the common good. But Capra’s patriotic films never confronted ongoing legal race discrimination and lynching in the South, and his portrayal of Americans unified by a common humanity is no more realistic today than it was then.

While Americans do “scorn” selfish drivers, Stewart ignores that we often favor and vote for politicians who seek to enshrine selfishness as the nation’s highest virtue. And these politicians, many of whom are aligned with the Republican Party, make no excuses for their stance – they see selfishness as the heart of capitalism and the engine that made this nation great.

A selfish driver causes temporary inconvenience; voters and politicians who tout selfishness cause millions to lose health care, and deny women the right to make a medical decision not to give birth. These selfish voters and politicians also oppose environmental, workplace and health regulations that benefit the greater good, and back policies that put eight to twelve million undocumented immigrants in daily fear for their lives.

I don’t see these pro-selfish politicians being scorned – I see them as elected to the Presidency, Senate and House, and as Governors. I also see those believing in the overriding virtue of selfishness as controlling a majority on the Supreme Court.

In Sicko, Michael Moore had a great critique of Stewart’s perspective on everyday Americans helping their neighbors. Moore described how people who eagerly brought a meal to neighbors who were sick saw no contradiction in opposing national health care.

Moore showed how private charity and personal cooperation has nothing to do with public selfishness and using your money, power and votes to take from the vulnerable to give to the rich. It is surprising that the sophisticated Stewart would be so taken in by the superficial interactions of daily life as to miss the deeper reality.

Stewart could have ended his talk with the same discussion of traffic and daily cooperation, but reached a different conclusion. Namely, he could have acknowledged that below the surface of daily cooperation is a rage fueled by right-wing and corporate interests, and vowed to join those helping to explain how the “selfish jerks” are hijacking American democracy.