Why I Am Canceling My 2010 CSUN Presentation 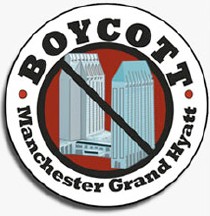 After much internal soul searching, I have reluctantly decided to cancel my 2010 CSUN Conference Presentation. Why? I recently learned of the national gay rights and labor boycott of the Manchester Grand Hyatt Hotel, the site of this year’s conference. This is CSUN’s first year in San Diego, and I hope that next year this wonderful conference can find a home in a hotel that does not run afoul of basic human rights principles.

For those of you who do not know, the Manchester Hotel boycott began as a response to the decision of Doug Manchester, the hotel’s owner, to make a $125,000 donation to fund Proposition 8 on the California ballot. Prop 8, which ultimately passed and is now being challenged in federal court, changed the California constitution to prevent gay and lesbian couples from marrying in this state. Unite HERE, this country’s largest union of hotel workers, has joined the boycott both in support of gay marriage – and also in protest of labor practices at the Manchester Hyatt, which is non-union.

I believe that issues impacting gay and labor communities affect us all, and indeed, people with disabilities are of course part of those communities. As a disability civil rights lawyer specializing in technology issues for the blind community, my work life is not impacted by the labor practices or political donations of the Manchester Hyatt. And as a straight married woman, my personal life is not impacted by Proposition 8.

Yet I feel compelled to support this boycott because I believe that an insult to the civil and human rights of one group impacts us all. Just as I want labor unions to have accessible websites or accommodate disabled workers, and hope that the LGBT movement supports disability rights issues, I support this boycott which is so important to the disabled community’s allies in both the labor and the gay rights movements.

I love the CSUN conference, which I have been attending since 2000. Officially titled the “Annual International Technology & Persons with Disabilities Conference” but known internationally as “CSUN”, its goal is to level the playing field for people with disabilities through accessible technology, information and services.Some of my closest friendships in the disability technology field were forged through annual CSUN visits, and I treasure the many many people I have met and learned from at CSUN. This would have been the fifth time I was selected to present at the CSUN conference, and I am still humbled by the opportunity.

I know that for CSUN, a conference that cares about accessibility (as all conferences should but do not), finding a new home after 24 years in Los Angeles undoubtedly presented added challenges. And I recognize and appreciate that not everyone who supports this boycott and the principles behind it is in a position to skip the conference this year, or on short notice. But I am able to do so and that is the right decision for me this year. I am confident that there are accessible conference locations that are not the target of a national labor and gay rights human rights initiative. I hope to be at CSUN 2011 in a location that is accessible to all, and welcoming to all.

Resources about the Manchester Hyatt Boycott

Lainey Feingold is a disability civil rights lawyer who represents the blind community nationally on technology and information access issues. Read more about her work at http://lflegal.com.