Why Exactly Is President Obama Acting Like George McFly? 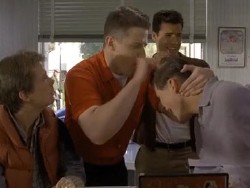 More often than not, I’ve attempted to give the Obama Administration the benefit of the doubt, both in terms of policy and politics. That’s not to say I’ve embraced every idea — I most certainly haven’t. But even when I’ve vocally disagreed with a policy position, I’ve attempted to see the wisdom and pragmatism behind the president’s choices.

But this week I have no blessed clue what the hell he’s up to. I’ve tried to look at this from every angle and each one leads me back to weak, weak, weak.

He’s following rules that no longer exist, pandering to voter attitudes that will have zero consequence in terms of both his approval numbers and his reelection chances. He’s completely off the rails — well beyond any notion of post-partisanship. In fact, if his intention has been to “change the way Washington does business,” he’s currently and epically failing because I simply can’t believe that the new and improved way is this way.

Within roughly 24 hours, President Obama preemptively capitulated to the Republicans and proposed an unabridged GOP idea — freezing federal worker salaries, then, almost as if on cue, the Senate Republicans put their unflinching childish obstructionism in writing and pledged to block everything unless the president extends the deficit-ballooning Bush tax rates. And in that mix, the Republicans blocked extensions of unemployment benefits. Twice.

The upshot? The president looks extraordinarily weak. Weaker than at any other time in his presidency. It probably didn’t help that he was literally beaten and bloodied when he announced the pay freeze, due to his weekend basketball fracas.

Of course the intention isn’t to appear weak. The intention is to appear magnanimous. The intention is to secure support from voters who buy into the ridiculous “both sides are the same” meme and who tell pollsters that they want more bipartisan cooperation, while incongruously voting for total gridlock and the potential of a government shutdown. During his pay freeze address, the president said the American people didn’t vote for gridlock. Really?

Unfortunately, however, bipartisan cooperation in this era has been entirely redefined to the point of virtual extinction. There’s no such thing as mutual cooperation between both parties. Modern bipartisanship is all about one party, the Democrats, flailing around and desperately struggling to appease the Republicans who return the favor by smacking the textbooks out of the president’s hands then kicking him in the ass while he picks up his crap off the floor — embarrassed and chuckling while muttering, “Oh, you guys.”

That character doesn’t look cooperative at all. He looks like a very smart and very serious… wimp.

In other words, the Republicans have constructed a political and media machine that allows them to function with impunity. All of cable news is packed wall-to-wall with Republicans who robotically repeat the same false, fact-free ideas over and over — and they’re given complete latitude because of the press’s self-flagellation over the “liberal media” myth. They’ve managed to guilt the press into supporting and repeating unvarnished bullshit like “tax cuts stimulate the economy and unemployment benefits don’t” and “allowing the Bush tax cuts to expire will hurt jobs” and “the stimulus didn’t work” and “the Democrats are spending us into oblivion.”

None of that is true. The Bush tax rates for the wealthy don’t stimulate the economy, but unemployment benefits do. The Bush tax cuts haven’t created any jobs in ten years, and middle class wages have stagnated. The stimulus worked (not well enough, but it worked). And the Democrats slashed the budget deficit by record numbers.

You’d never know it, though, because whenever a Democrat — say, Bernie Sanders or Anthony Weiner or the outgoing Alan Grayson, for example — steps up and forcefully tells the truth, they’re assaulted by political hipsters who harrumph and bitch about “both sides” acting insane and shrill and why can’t we all just be nice! You know, nice like the glorious olden days when there weren’t witch hunts or duels or beatings or civil wars.

Meanwhile, the Republicans line up in lockstep on television and repeat the same lines over and over and over. The media repeats and validates during Sunday morning “smackdown” often featuring John McCain. The Democrats concede. And the Republicans win the debate — usually by grinding it into the ground with nonstop crazy and by filibustering everything.

The Republicans are on television every day admitting that their entire goal is simply to screw the president by sabotaging the economic recovery. This is unbelievable. Eight years ago, these were the same people who insisted that merely criticizing the commander-in-chief during wartime would endanger the troops. Now these same bastards are not just criticizing the president, but they’re questioning his religion, his citizenship, his loyalty to America — and they’re endeavoring, as their primary goal, to make him fail by dragging the economy down. They’re doing this by filibustering policies that stimulate economic growth (unemployment benefits, for example), while promoting ideas that don’t stimulate economic growth at all (Bush tax rates, for example).

The president, meanwhile, appears to be operating under the frustratingly obvious misapprehension that the Republicans will reciprocate his generosity, and, if they don’t, the American people will punish the Republicans accordingly. The Republicans won’t reciprocate at all, of course, and the American people won’t notice their grabassery. And the ones who do will get caught up in the Fox News, AM radio tsunami and somehow end up blaming the president for being overly partisan.

At this point, I’d really like to see how the White House intends for their calculus to unfold. If they’ve figured out a path around the Republican filibusters and their disassociation with reality without unilaterally giving away the store, then it might be nice to have a hint about the plan. And I’m not suggesting they reveal their strategy, but maybe just show us some results. Show us that this is process of appearing wimpy in the face of Republican intransigence will actually work to undermine the Republicans and pass the president’s agenda. If not, we can only assume that they’re just giving up their principles and letting the Republicans drive. I can’t imagine anything more destructive. Especially now.

Bob Cesca is the host of the Bob and Elvis Show. He is a regular front-page contributor at Huffington Post, where this piece was first published.