Why Everyone Loves the Olympics 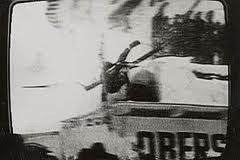 Movie attendance in the U.S. declined 25% last weekend, with industry sources blaming the Aurora shootings. But the Olympics was the real reason. Why pay money to see the Dark Knight, Ice Age or other blockbusters when synchronized swimming and women’s gymnastics can be watched at home for free? And while baseball attendance did not decline, everywhere I went this weekend had the Olympics on television rather than the Giants-Dodgers series. Nationalism, media hype and the chance to view great athletes are cited for the Olympics popularity, but after watching a documentary on Jim McKay and the success of Wide World of Sports, I think another reason predominates: the emphasis on the “human drama of athletic competition” distinguishes the Olympics from other entertainment events.

The current Olympics is breaking viewership records, and putting the movie industry in a funk. Batman’s dramatics cannot match the tension of a young woman on a balance beam, and the Dark Knight’s battle with Bane pales before the Ryan Lochte-Michael Phelps rumble in the pool.

While synchronized swimming, archery, and water polo are not normally big ratings grabbers, during Summer Olympics they are can’t miss television. The Olympics is when we get reacquainted with beach volleyballers Misty May (who I knew as a baby) and Kerri Walsh, and start following track and field events.

But when considering the reasons for the Olympics popularity, recall that not long ago even lesser known sports had people glued to television screens despite a lack of hype and nationalist fervor. And these athletes lacked the physical beauty of many now performing in London.

It all began with the Thrill of Victory and the Agony of Defeat. The weekly show that spanned the globe to bring viewers the constant variety of sport.

How did McKay attract and build an audience for events whose outcomes were excluded from newspaper sports sections? His formula is on display in the 2003 HBO documentary on his life.

McKay began each segment acknowledging the lower-visibility of the sport about to be shown. But he quickly turned this into a virtue, maintaining that it was precisely its smaller-scale that made it even more effective in revealing the “human drama of athletic competition.”

As framed by McKay, viewers were not simply watching a log-rolling contest on a Minnesota lake or a bobsled competition in Germany; we were instead being given a unique insight into a titanic struggle between forces of human will.

McKay turned efforts by obscure barrel jumpers to set world records into powerful human dramas with back stories that all fans could appreciate. As a result, millions closely identified with the ski jumper that crashed coming down the hill, the stock car racer who hit the wall, and the curlers and crazed fans in London’s historic Wembley stadium

ABC covered the Olympics in the 1960’s and 1970’s, enabling McKay to take this “up close and personal” approach to the next level. If Wide World of Sports could viscerally connect viewers to bowlers and barrel jumpers playing in competitions few had previously cared about, the strategy would prove even easier with gold medals at stake.

Professional sports also use personal story lines to draw in casual viewers. Lebron’s effort to win his first title, Tiger Woods’ struggle to regain his game, and Roger Federer’s quest to regain the number one seed are among the many vital backstories that boost interest.

But pro sports have a huge fan base. Archery, shooting, water polo, swimming, and men’s gymnastics do not. Even track and field and women’s gymnastics lack sufficient popularity to support a professional league in the United States.

That’s why it is the human drama of athletic competition that drives the Olympic Games.

Few had even heard of Olga Korbut before she became the world’s most famous athlete during a few days of the 1972 Olympic Games. Viewers were entranced by Korbut’s personality and struggles, and the human drama of her effort to circumvent staid Soviet Union restrictions on her outgoing personality.

The power of the human drama is more manifest in contests where participants are said to have worked their entire lives for a single shot at a gold. And when failure comes to favorites like Dwight Stones, whose certain gold victory in the 1976 high jump was erased by rain, or to miler Jim Ryun, who was tripped during a 1972 heat and missed qualifying for a medal, we witness and indirectly experience the agony of defeat.

The NBA players on the Olympic basketball team get publicity, but it is not their stories that are driving viewership. Their stakes are not as high as for the diver or weightlifter for whom the Olympics is their only day in the sun.

Few realized it at the time, but Wide World of Sports revolutionized television broadcasting. And its approach explains why the Olympics remain the greatest show on earth.