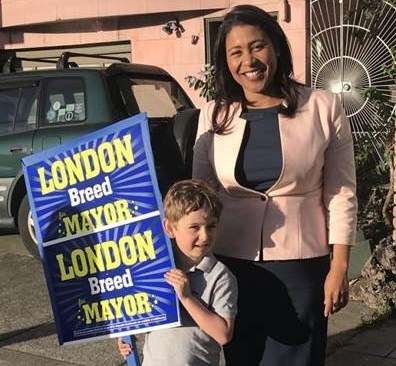 Many wonder why San Francisco Mayor London Breed is essentially running unopposed. The short answer is that her strong performance upon taking office denied an opening for a challenger. This enabled her to waltz to a four year term.

But Breed’s lack of opposition fits a larger pattern: San Francisco voters almost automatically back locally elected incumbents (I’m speaking of elected, not appointed, incumbents). In the past two decades only Mayor Willie Brown in 1999 faced a serious re-election challenge, and Brown defeated Tom Ammiano by nearly 20%. Mayor’s Gavin Newsom in 2007 and Ed Lee in 2015 joined Breed in 2019 in essentially running unopposed.

This mayoral pattern also applies to supervisors.People love to criticize the Board but actions speak louder than words: no elected incumbent has been defeated for re-election since district elections returned in 2000. Few have even faced tough challenges. People disparage the Board of Supervisors and “City Hall” dysfunction but support their own supervisor’s re-election.

My 2019 election prediction column is still two weeks away but support for locally elected incumbents is so certain that I can already predict San Francisco supervisor races for 2020. Incumbents Aaron Peskin, and Hilary Ronen are a dead lock cinch to win. Sandra Lee Fewer is a near certainty, as no serious rival has emerged. Many felt Ahsha Safai’s close win in D11 in 2016 would prompt strong opposition in 2020 but the labor groups that backed his 2016 opponent likely have higher priorities now. All four of these supervisors will return to the Board in 2021.

I could even predict the winner of the open D7 seat. I won’t until the candidate announces but it is no mystery to insiders.

San Franciscans complain about the city’s direction but easily re-elect those establishing city policies. For all the talk about San Francisco allegedly losing its soul and dysfunction at City Hall, voters routinely re-elect those in power by large margins.

What explains this disconnect between an allegedly discontented electorate and its re-election votes? I have a few theories.

In deciding what’s news, media outlets recognize that “airplane lands safely” doesn’t qualify. Nor have I ever seen the headline “Rent Control Working;” it is stories of evictions outside rent control that make news.

I have found that most public objections to supervisor’s actions come from those who are outside the district. So public anger over an issue often has no electoral impact.

San Franciscans are said to be up in arms over homelessness, traffic, quality of life on streets, restaurant closures, housing unaffordability, MUNI/ public transit delays, and economic inequality. But most voters, rightly or not, see these problems as either systemic or not the fault of individual supervisors. Mayors can get into trouble over these issues but few voters are blaming London Breed for not solving problems that started well before she took office in July 2018

Consider the 2011 Mid-Market/Tenderloin tax credit for net new hires, known as the “Twitter” tax credit. The media featured a blizzard of stories from opponents. Yet the tax passed the Board 8-3. Mayor Lee then handily won the 2011 mayoral election when his support for the tax credit was a central issue. Lee then faced no serious opposition in 2015, which would not have happened if there were a groundswell of public anger over the tax credit.

To this day the media has treated the tax credit as widely unpopular when the electoral outcomes associated with the policy say the opposite.

The Cost of Challenging Incumbents

It’s expensive to run for supervisor. If a challenger to an incumbent is not independently wealthy, how can they fund a serious campaign? Anyone with business at City Hall is reluctant to get on the wrong side of a supervisor likely to win re-election by donating to their opponent. Donors can come from industries/constituencies who the supervisor has already alienated (by votes or actions) but campaign spending limits make it hard to raise enough money from those sources alone to be competitive.

Candidates who lose, even in close races, also prefer to wait until the incumbent is termed out. Consider the paths of Supervisors Mandelman and Safai. The former lost to Scott Wiener in 2010 and then instead of challenging him in 2014 spent his time building his base for an open seat in 2018 (an interim mayoral appointment did not alter the outcome). Safai lost a much closer race to John Avalos in 2008 and decided to wait to run until 2016 rather than run again in 2012.

It’s not just San Francisco. The last time Los Angeles voters unseated an incumbent councilmember was in 2003. And that win by former Assembly Speaker and former mayoral candidate Antonio Villaraigosa deserves an asterisk as his council race was recognized as a precursor to a 2005 mayoral run.

The message? Elect the right candidate to open seats because tradition says they will serve eight years even if they are not very effective.