Why Can’t YIMBYs and Tenant Activists Get Along? 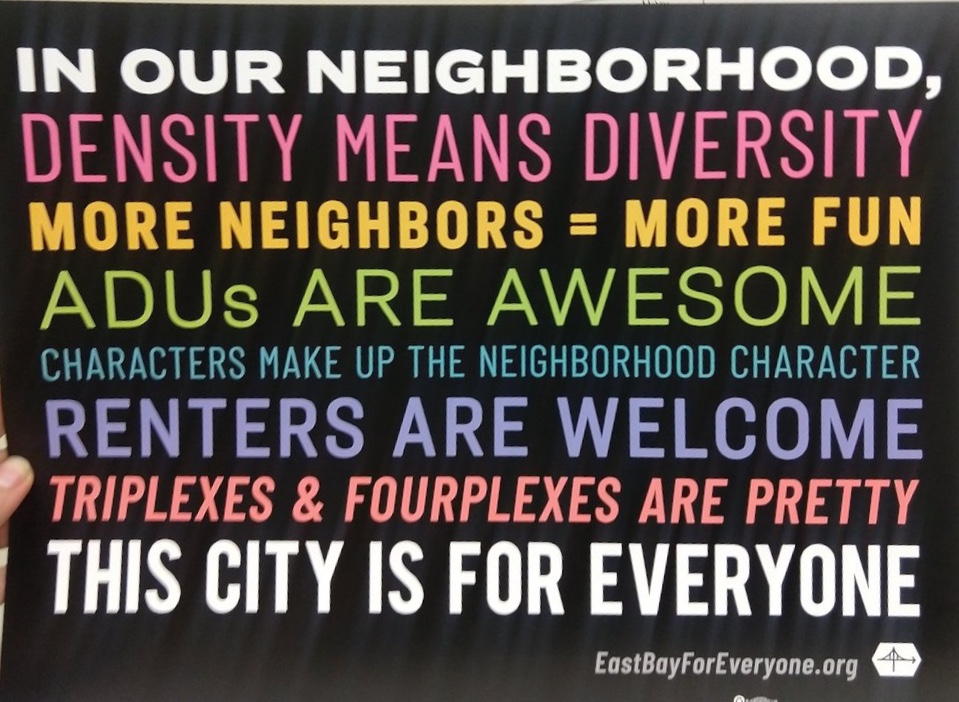 A YIMBY activist with East Bay for Everyone recently tweeted support for a yard sign (photo above) promoting a welcoming attitude toward tenants and the building of triplexes and fourplexes in single family home neighborhoods.  The sign states “In Our Neighborhood, Density Means Diversity, ” “Renters are Welcome,” “ADUs are Awesome” and “This City is Welcome to Everyone.” In a slap at homeowners who identify preserving neighborhood “character” with keeping renters out, the sign also says, “Characters Make up the Neighborhood Character.”

Seems like a message that all who care about tenants would support, right? Not exactly.  A Portland activist took offense, tweeting, “Excluding renter protections makes this typical YIMBY blindness to real urban solutions. It should alarm you YIMBY white folks this sign excludes diversity – if you loved renters add on #RentControl #FreeTransit at the top, by any means necessary, before adding more YIMBY housing. And ban #NoCauseEvictions fix this sign. “

The tweeter from East Bay for Everyone is not white. The group  strongly backs California’s Prop 10 to repeal the anti-tenant Costa-Hawkins Act and has been on the tenants’ side of every landlord-tenant policy dispute.

The episode highlighted the hostility between two constituencies primarily made up of tenants. We saw this during the fight over California’s SB 827 (which sought to increase density on or near transit corridors) as well as during state and local campaigns around housing and tenant protections involving YIMBYs or tenant groups.

Based on the many sarcastic social media postings, I gather that some in each group seem to relish criticizing those with the other. But as someone who is very result oriented, this process of turning potential allies into fierce enemies does not make sense to me.

I see building movements as looking for commonalities among diverse constituencies so as to build a winning political base. Focusing only on the areas of disagreement narrows a campaign’s potential base, ensuring that the issues you most care about do not get the broad support to prevail.

For example, consider the obvious example of nearly all the cities that ban apartments in most of their neighborhoods. This ban applies to all apartments, and prevents the affordable units that many tenant groups strongly support.  A campaign to legalize apartments should draw support from tenant and YIMBY groups but in most cities these groups feel such distrust toward the other that this critical alliance will not happen.

Who wins from this division? Landlords and existing homeowners. Who loses? Tenants. And all those who care about increasing housing affordability in urban America.

Tenant groups and YIMBYs are split over two core issues. The first is the target population of their work.

I have long supported both goals, and my new book, Generation Priced Out, explains why cities must do both. But I recognize that many groups only have the time to focus on one.  Criticizing YIMBYs for not prioritizing strengthening rent control laws or tenant groups for not lobbying city officials to build more affordable housing ignores how most social movements typically focus their energies.  Under such twisted logic groups pushing for single payer health care can be accused of ignoring the housing crisis, and any group not putting all its resources into addressing climate change of really missing the big picture.

The crux of the YIMBY/tenant group conflict is whether increasing housing supply produces greater affordability. And without getting into the deep weeds of this argument now, I would say that Seattle’s Mandatory Affordability Plan (MHA), San Francisco’s HOME-SF, and a development plan at a closed Ford plant in St.Paul, Minnesota all show how new housing development can produce greater affordability.

The idea of connecting increased housing with more affordable units should make logical allies of YIMBYs and tenant groups. But some in both camps prefer to fight over differences in percentages, even if this means that the opponents of any inclusionary housing or density bonuses end of prevailing.

I have found members of both constituencies eager to jump on “smoking guns” that supposedly “prove” the facts about the other.  For example, when the Endorsement Committee  of East Bay DSA, 827 came out last week opposing Berkeley’s affordable housing bond Measure O (they did so out of “solidarity” with “working-class homeowners”),  YIMBYs had a field day tweeting about how the recommendation showed that the DSA left was aligned more with rich homeowners than with working-class tenants. But the full East Bay DSA chapter endorsed Measure O, so that “smoking gun” was extinguished.

Similarly, those pushing for California’s Prop 10 see SF’s YIMBY Action’s staying neutral on the measure as “proof” that YIMBYs don’t care about tenants. But the East Bay YIMBY group backed Prop 10 and I think what happened in San Francisco was that most of those voting on the endorsement were not really clear on how Prop 10 would or would not impact development.

I got the impression in the weeks leading up to the SF YIMBY endorsement—and I really hope I’m wrong—that many tenant activists were almost hoping that the group would not endorse Prop 10 so that it would “confirm” that YIMBYs don’t care about affordability.  I certainly saw little evidence of efforts to persuade SF YIMBYs to endorse Prop 10, while there was an aggressive No on 10 waged by SF YIMBYs on social media.

If your view of politics is that you only work with groups whose positions on all issues you agree with 100% of the time, then my argument is lost on you. But I think there are enough YIMBY and tenant group activists who share enough common goals that working on issues like legalizing apartments and density bonus plans for increased affordability can build winning local and statewide campaigns.

Yes, a lot of distrust on both sides must be overcome. But the pricing out of the working and middle-class from the nation’s most popular cities requires urgent action.

I’ll be talking more about the specifics of building YIMBY alliances with tenant and equity groups at the Friday morning session at YIMBYtown in Boston next week.

Randy Shaw is Editor of Beyond Chron. His book,  Generation Priced Out: Who Gets to Live in the New Urban America, will be out in October from UC Press.