Why Can’t We Go Bowling and Have a Beer in the Mission? 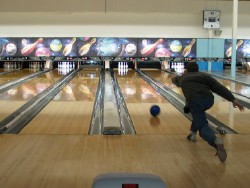 Shortly after I was sworn in as a member of the Board of Supervisors, I was introduced to a woman who was trying to do something good for the Mission and San Francisco: open a bowling alley at 17th and South Van Ness. Maybe I’m a sucker for bowling alleys because of my New Jersey roots – after all, I love greasy spoon diners and roller rinks, both very New Jersey. Maybe it was because I think that the greater the diversity of entertainment options in our city, the better. Or, maybe I just love it when someone wants to be an entrepreneur in San Francisco. Whatever the reason, I was immediately interested in the project.

And, I was immediately troubled when the woman informed me that the Planning Department had concluded that her bowling alley could not sell alcohol – even beer or wine.

I looked into it, and it turns out that in 1996, in response to the proliferation of alcohol establishments in the Mission, particularly blighted packaged liquor stores, the City adopted the Mission Alcoholic Beverage Special Use Subdistrict (“Mission SUD”), section 781.8 of the Planning Code. The boundaries of the Mission SUD are Guerrero Street and San Jose Avenue on the west, Potrero Avenue on the east, 14th Street in the north, and Randall Street in the south.

In this expansive geographic area, covering portions of Districts 6, 8, and 9, the Planning Code prohibits all new businesses from getting a liquor license except for “bona fide restaurants” – i.e., restaurants with full-service kitchens where take-out services are incidental – and nonprofit theaters. All other businesses entering the area – explicitly including bowling alleys and billiard parlors – are barred from obtaining a liquor license. For example, a corner liquor store cannot sell its license to a grocery store or takeout restaurant in the SUD if the grocery store or takeout restaurant also wants to sell bottles of wine or six packs. So, not only is the SUD designed to cap the number of liquor-serving establishments, but it’s designed to attempt to reduce them and to prevent liquor-serving businesses from changing to different kinds of businesses, even more neighborhood-serving businesses.

Fortunately for the bowling alley, we’re on track to fix the problem. I quickly conferred with my colleagues, Supervisors Jane Kim and David Campos, who agreed that some sort of reform of the SUD may be warranted. Supervisor Kim, with me as co-sponsor, introduced legislation to exempt bowling alleys from the SUD. We’re all hopeful that the legislation will pass and that the Mission will, once again, be a safe space for bowling alleys.

However, the problems with the Mission SUD go well beyond prohibiting bowling alleys. The SUD is broad enough, both geographically and in its prohibitions, that it prevents current great businesses from expanding to offer an alcohol selection. For example, local groceries like Valencia Whole Foods and Jump Start Coffee & Grocery cannot get licenses to sell organic wine and beer. Restaurants that are primarily takeout cannot sell wine or beer for people to carry out with their food for consumption at home. A bakery like La Boulange de Polk, which prepares the majority of its food elsewhere, could not sell beer or wine in the SUD because of the lack of a full kitchen.

The SUD also prohibits any and all new and creative business establishments that happen to include an alcohol element: tavola calda, variations on takeout, or potentially future creative ideas from the folks at Mission Street Food.

Finally, the SUD encourages alcohol-serving businesses to remain in place even if they no longer serve the neighborhood well. After all, once that business stops operating in the SUD, the liquor license cannot be transferred to a new business. We can all think of poorly maintained liquor stores that sell mini-bottles of liquor, malt liquor, and other liquor that causes problems. The SUD encourages these uses to remain and not be transferred to better uses and undermines effective alcohol regulation since when licenses are transferred, SFPD, working with ABC, is able to place conditions on the licenses (e.g., no malt liquor, no 40-ounce bottles, no mini-bottles).

The Mission SUD has outlived its usefulness. It started out with a valid purpose – controlling alcohol blight – but as is often the case with well-intentioned Planning Code bans, the law of unintended consequences has reared its ugly head.

Scott Wiener is a member of the San Francisco Board of Supervisors, representing District 8.