Why Blacks are Propelling Clinton to Victory 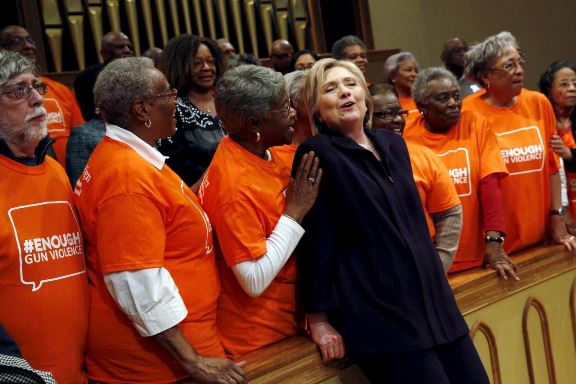 Clinton campaigning in an African-American church

Since the 1960’s, African-American voters have been the bedrock of America’s progressive movements. In 2016, however, black voters are supporting Hillary Clinton against left favorite Bernie Sanders at even higher percentages than they backed Barack Obama in 2008.

The conventional explanation is that black voters simply know Clinton better than Sanders. But that is overly simplistic and even condescending. It implies African-Americans prioritize familiarity over the candidate whose values they feel they share.

Sanders spent heavily on his losing effort in South Carolina. He also got a leading African-American legislator in the state to switch from Clinton to him, and unleashed ads from Spike Lee urging blacks to support Sanders.

Further, Michelle Alexander, author of The New Jim Crow, has had articles seemingly everywhere blaming Clinton for the mass incarceration of African-Americans caused by the 1994 crime bill. In addition, Ta Nehisi Coates reversed his prior criticism of Sanders by endorsing him. Many black activists have pointed out the devastating and disproportionate impacts of Clinton’s welfare “reform” on African-Americans.

It’s not that Sanders forces didn’t make their case to win African-American support. Rather, their arguments simply weren’t persuasive.

I think Sanders failed to connect to African-American voters because his appeal is strictly secular. He does not try to frame his agenda in the spiritual terms that have long resonated in the African-American community.

Clinton, in contrast, has prioritized a spiritual message. In her South Carolina victory speech she quoted Corinthians at length. She referenced a talk she’d had with a local minister and said that what is most needed in the United States is more love and kindness. She further preached “love and kindness” in two Memphis churches on February 28.

There’s a reason African-American ministers across the South are backing Clinton—they see her as speaking their language while Sanders is not. And their parishioners feel the same.

Barack Obama always integrated spiritual and religious appeals into his 2008 campaign speeches. This messaging helped turn the black community to his side after its initial loyalty to Clinton.

Bill Clinton is not the only Democratic President who maintained broad popularity among African-Americans despite passing laws that had a disproportionately negative impact on blacks. Jimmy Carter did as well. Both Carter in Plains, Georgia and Clinton in Hope, Arkansas developed positive relationships with African-Americans that helped them keep black support throughout their presidencies.

Neither the 1994 crime bill nor the 1996 welfare repeal led blacks to turn against Bill Clinton when he faced impeachment. To the contrary, despite passing laws that alienated progressives Clinton retained strong African-American support to the very end.

I’ve heard a lot of Sanders’ speeches including the one he gave in Rochester, Minnesota the night he lost South Carolina. He offers a laundry list of progressive proposals that resonate powerfully with young whites and the left. But he does not frame these problems in spiritual terms.

Many African-Americans get Sanders’ economic arguments but also see the nation’s crises as having a spiritual component. They do not relate to Sanders’ strictly secular vision. You don’t lose the black vote in South Carolina by a whopping 86%-14% margin, as Sanders did, without utterly failing to connect to African-American voters.

Clinton won blacks in Nevada by an astounding 76%-22% margin. Many of these voters were in heavily unionized Clark County. These  working class African-American voters, long considered part of the progressive base, heavily preferred Hillary Clinton to Bernie Sanders.

These huge margins are not because African-Americans favor Clinton’s student debt plan or strategy toward ISIS over Sanders’  proposals. Some of the margin is attributable to Clinton’s greater support for Barack Obama, but that does not explain a victory margin of over 50%.

Clinton is dominating the black vote because she is doing a much better job connecting with African-Americans in spiritual terms. Clinton’s broader framing will also give her an edge among Latinos, and helps explain why she even beat Sanders in South Carolina among whites.

Bernie Sanders has shown the potentially winning message of an openly “left” candidate. But to win, a progressive economic message must be joined by a spiritual one.