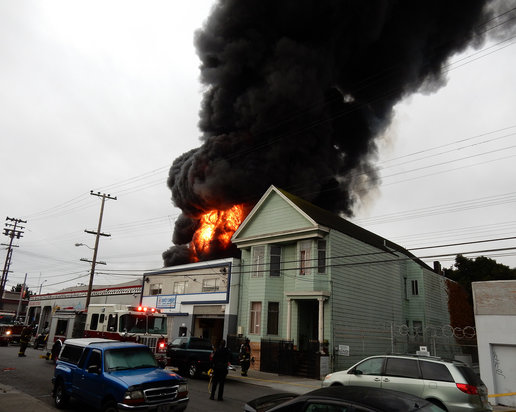 Nov. 6 fire at 16th and Shotwell in SF's Mission District

Despite, talk, activism and ballot measures to stop the displacement of Latinos and other tenants from San Francisco’s Mission District, a prime cause remains unaddressed: displacement by fire. The November 6 fire at 16th and Shotwell streets added another 23 displaced tenants to the Mission’s growing toll, raising new questions about why there is still no move to require sprinklers in Mission District apartments.

I first raised this question last February (“SF Needs Apt Sprinkler Law,” Feb 2), after a 22nd and Mission Street fire included both a fatality and the displacement of Latino families. Unfortunately, the SF Chronicle and other media used the fire to shift blame to “overworked fire inspectors.” They failed to acknowledge (“Media Misleads Public on SF Fires, Feb 20”) that an apartment sprinkler law would prevent nearly all of these fires and stop tenant displacement.

Mission activists didn’t ask the media’s approval before moving forward on the Mission moratorium. So what’s delaying the push to get an apartment sprinkler law in the Mission, if a citywide measure is too politically difficult?

A Mission District-only apartment sprinkler law is a response to two political realities.

First, tenant groups appear to have higher priorities than waging what some believe would be a tough citywide fight for apartment sprinklers. I think a citywide fight is winnable, but it requires a broad movement that has yet to, and may not ever, emerge.

Second, the logic of Prop I and the drive for a Mission moratorium—that the Mission is undergoing displacement pressures far greater than other neighborhoods—also applies to the number and displacement impact of it fires. The Mission’s high incidence of wood frame construction and its many mixed-use properties (fires starting in commercial kitchens or in buildings like the tire story) put the Mission’s residential stock at greater risk.

If community support is there, Mission District Supervisor David Campos can bring a Mission sprinkler law to the Board next year that passes hands down. There’s simply no reason for further delay.

Fires directly displace low-income Mission tenants. I got the Rent Board to enact a regulation back in the 1990’s to ensure tenants the right to return at their former rent after fires, but the delay in return often lasts over two years. This leads most most tenants to accept buyouts in lieu of waiting to return, as they need extra money to pay current market rents in the interval (the city’s Good Samaritan law encourages landlords to temporarily house fire victims, but I’ve heard of few cases where fire victims are given below market housing for two years).

So fires typically result in the permanent displacement of tenants and the raising of rents to market. Yet there has been no action to protect tenants from this direct displacement. Instead, activists have prioritized stopping what they see as the indirect displacement caused by market rate housing.

While working for sprinklers and to stop market rate housing are not mutually exclusive, addressing direct displacement should be at least an equal priority.

I’m tired of reading stories in Mission Local about tenants displaced by fire. Let’s put an end to this dangerous and potentially fatal form of displacement in 2016.

Randy Shaw is Editor of Beyond Chron. If you are looking for a fun read on San Francisco history this holiday season, he encourages you to read his new book, The Tenderloin: Sex, Crime and Resistance in the Heart of San Francisco