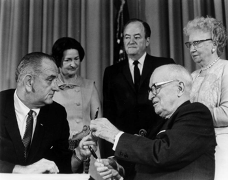 It’s 1974. Richard Nixon resigns the presidency; Barbara Streisand is singing, “The Way We Were” all over the radio (that music-playing thing before the internet); and you can buy a hand calculator that can only add, subtract, multiply, and divide for, in today’s currency, $100. Someone asks you: Here are three pretty radical ideas – which do you think is likely to happen first, if ever?: