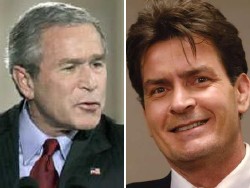 The media was overwhelmed with important stories this week, including a civil war in Libya, ongoing labor protests in Wisconsin, and the battle over the federal budget. But one story captivated Americans the most: actor Charlie Sheen’s sharing his home with two women he describes as “goddesses,” and his removal from “Two and a Half Men,” for slanderous and Anti-Semitic attacks on Chuck Lorre the show’s executive producer. Americans cannot get enough of Sheen, which is why he held nine interviews with major media on a single day, which were even run on political shows like Lawrence O’Donnell’s The Last Word on MSNBC. When Sheen got a Twitter account this week, he soon had one million followers. And despite all of his drug abuse, his comments to Lorre, violence against women and alleged poor parenting, Americans seem to still love Charlie Sheen – in sharp contrast to their harsh attitude toward Britney Spears, Lindsey Lohan and other female celebrity wrongdoers.

Until his firing this week, Charlie Sheen was the highest paid actor in a television series, earning an astonishing $1.8 million per 22-minute episode. He was well worth it, as his series brought millions of dollars in profits to CBS.

ABC’s “20/20” interview of Sheen gave the network the highest ratings for a newsmagazine program in over two years. The reason every show that had a chance to run a Sheen interview did so is that he fascinates people, and not in a negative way.

Sheen was hired to star in Two and a Half Men despite high-profile domestic battles with his first wife, Denise Richards, which kept him regularly in the tabloids. In fact, this experience, along with well publicized alcohol and drug problems, likely helped him get the part in Two and a Half Men as a carousing middle-age man.

While some have denounced Sheen’s recent shenanigans – among them Nancy Grace on CNN’s Headline News, one of whose guests was hysterically demanding that Sheen’s kids be taken away from both parents – he remains widely popular. Unlike Spears or Lohan, whose personal train wrecks were uniformly condemned, Sheen is the quintessential American “bad boy” who can ultimately do no wrong.

If you doubt this, consider Jeff Bridges’ wildly popular Oscar-winning role as “Bad Blake” in last year’s Crazy Heart. This overweight drunken lounge singer was able to attract the affections of the beautiful and sexy Maggie Gyllenhaal, despite a 28-year age difference.

And this was not a case of a wealthy older man being able to attract a younger woman. When they met and Gyllenhaal fell for “Bad Blake,” her character had more resources than Bridges.’

Yet America loved this movie, willingly accepting the preposterous plot points that had Gyllenhaal fall for a down and out drunk. Such a relationship does not happen in real life, but its clear from Crazy Heart’s success that America wants it to be true.

And it was not just men who loved Crazy Heart, a movie that I found unwatchable due to the unbelievable Gyllenthal-Bridges relationship. Just like its not just men who enjoy watching Sheen play an overgrown frat boy in Two and a Half Men.

Unlike Charlie Sheen, Britney Spears and Lindsey Lohan have never been charged with domestic violence. While all three have had substance abuse problems, to my knowledge only Sheen brags about his drug use and makes cocaine sound like a counter-cultural mind-expanding drug like LSD.

There is also a sharp contrast in their family backgrounds. Sheen is the son of actor Martin Sheen, a man of great political integrity and among the most progressive actors of his time. His brother, actor and director Emilio Estevez (who reclaimed his father’s birth name), has not had the problems of his brother.

While Charlie Sheen grew up amidst privilege, Spears and Lohan had to make it on their own. Both are psychologically troubled, have difficult relationships with their parents, and while Spears may be reviving her career few would be surprised if Lohan’s downward course continued to an early death.

America hates the girls who made it all on their own and fall into trouble, but we love the guy from privilege who shows how to live as a “man’s man.”

Unlike Lohan, who can’t even get insured for acting roles, Charlie Sheen’s future is bright.

Sheen will either return to his old show, be hired for another television series, or spend time making another sequel to Major League. He will be more in demand than ever, and a tell-all memoir cannot be far off.

I’m just glad that Sheen is not some right-wing politico, because all he would need to be elected a U.S. Senator from a state like Texas would be more clean drug tests and to be publicly “born again.” After all, George W. Bush, another child of privilege, used his bad boy image to get handed the presidency in 2000, and to win election in 2004.

Based on the test of which candidate you would like to sit next to on a long plane flight, Sheen would be unbeatable.