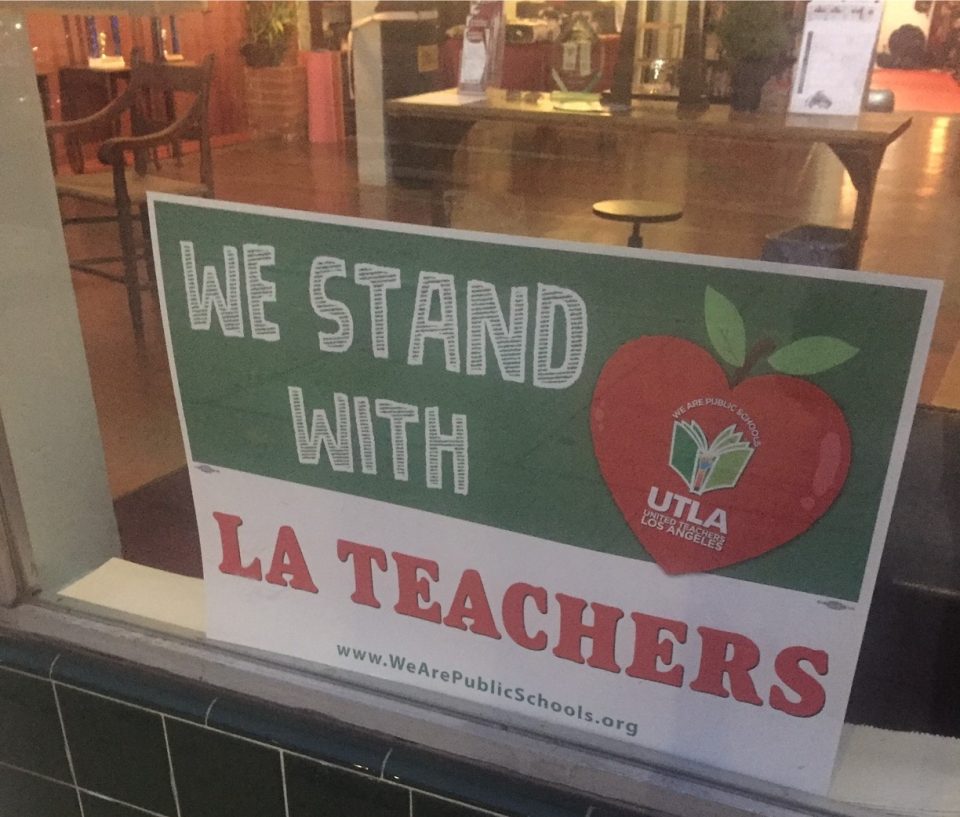 (This piece first appeared in Capital and Main, an excellent source for ongoing coverage of the strike that began January 14)

Los Angeles teachers’ demands have moved away from bigger raises and toward more funding to alleviate deep education cuts. But what would constitute victory for their union?

If Los Angeles’ public school teachers go on strike Monday, they will face off against a school district headed by superintendent Austin Beutner, a multimillionaire investment banker and former L.A. Times publisher with no experience in education policy. Perhaps more important, this strike will play out on an education landscape that has radically changed since 1989, when the United Teachers Los Angeles union last walked out. Foremost has been the national rise of charter schools — which, in California, are tax-supported, nonprofit schools that operate within public school districts, yet with far less oversight and transparency than traditional schools. Only a fraction of charter schools are unionized, a situation preferred by the charters’ most influential supporters, who include some of California’s wealthiest philanthropists.

For 21 months negotiations have ground on between UTLA and the second-largest district in the nation. (The Los Angeles Unified School District enrolls 640,000 students.) The more nuts-and-bolts issues on the table include union demands for a 6.5 percent pay raise, a limit to class sizes (that can now hover around 38 pupils per classroom), and a push for more support staff such as nurses and librarians.

Kent Wong, executive director of the University of California, Los Angeles’ Labor Center, notes that UTLA’s demands have moved away from larger raises and toward more funding to alleviate the deep education cuts that have been made over the years.

“It is important to understand the bigger forces at work here,” said Wong, who added that the pro-charter forces have invested millions of dollars to elect a pro-charter majority on the Los Angeles school board to shift resources from public schools to charters.

All strikes are risky undertakings and it’s an axiom that no one wins a strike. But a UTLA walkout would dramatically raise the stakes by casting the strike as a challenge to the creeping absorption of public schools by private charter management organizations.

A walkout by the Los Angeles union (whose 33,000 members include librarians, student counselors and other support staff) would have a recent, successful precedent. Against great odds, Chicago teachers won a seven-day 2012 strike, which became a model that transformed the school-community relationship and how teachers interact with parents. That strike was launched after a careful grassroots effort to build support among parents and the Chicago union; it is cited by Ken Jacobs, chair of the UC Berkeley Labor Center, as a national example.

“You could look at the Chicago teachers strike and say that was a brilliant strategy in terms of the level of community support,” said Jacobs. “But stepping back—teachers care about education. If you look at the strikes, they are not just about pay. They are about the quality of education.”

An all-in strike strategy may be risky for UTLA, but the union and others see peril for district management as well. “If [Beutner] is thinking it might be advantageous to provoke a strike,” said Jacobs, “given the recent history we have seen in states across the country and in Chicago, that seems like a foolish position to take.”

The issue in Chicago was Mayor Rahm Emanuel’s effort to close schools and the union’s push to keep them open. This was different from the situation in L.A. and in states along what Jacobs calls the “red thread”– West Virginia, Oklahoma and Arizona, where the teachers joined with parents to oppose the underfunding of education that has occurred since the 2008 recession. Still, Chicago offers potential lessons for Los Angeles teachers.

Nelson Lichtenstein, who directs UC Santa Barbara’s Center for the Study of Work, Labor, and Democracy, calls Chicago “the de facto leader of the teachers unions in the country.”

The Chicago teachers union would later reach out to teachers in West Virginia, Oklahoma and Arizona, sharing their members’ experiences, he said, adding that, in organizing for a potential strike, the traditional big fear is that the parents are going to turn against the union. That didn’t happen in Chicago because of mindful base-building and teachers’ connections with their students and their parents.

That lesson hasn’t been lost on UTLA.

In Los Angeles signs have popped up in the windows of local businesses declaring, “We Stand With LA Teachers,” and local parent groups have banded together to support the educators.

“I think the union will emerge stronger from this regardless of what happens,” Lichtenstein said of a possible UTLA strike. “They have done a good job of mobilization among their members and with parents. Things could turn around–a long strike and parents get upset—but I think UTLA is sophisticated enough to know what’s happening. They’d cut their losses.”

What would constitute “victory” for Los Angeles teachers?

“One definition would be very concrete things [like raises and staffing issues] —the union could win some of that,” Lichtenstein said. “The other definition is bigger—it could be the re-funding of public education in California and the country. This kind of strike is a powerful impulse to tell the [Democratic] supermajorities in Sacramento to modify Proposition 13, to bring new sources of funds so that school districts are not starved.”