Why a Ban on BART Strikes is the Wrong Solution 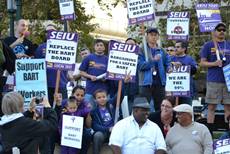 On Friday, BART employees at SEIU and ATU will likely ratify the deal negotiated last week and the following day BART’s Board of Directors will likely vote to approve it. Apart from a few crazies on both the left and right who were hoping that the strike or the dispute kept going, most of us BART riders will be extremely glad that it is finally over and hoping that we never have to go through this again. It’s not surprising, therefore, that some politicians have attempted to exploit public frustration. Orinda Councilman Steve Glazer, who is running for the California Assembly, has tirelessly promoted his campaign for change in state law to ban strikes by BART workers. It’s an easy time to call for coercive legislation but a strike ban is the wrong solution for the Bay Area and it wouldn’t work.

First, let’s remember that, contrary to popular belief, BART strikes are relatively uncommon, and when they do occur, it is – unlike this last strike — usually for good reason. Prior to this year’s dysfunctional negotiation process, the last strike at BART was sixteen years ago – a six-day strike in September 1997. That strike, which followed a sixty-day cooling off period imposed by Republican Governor Pete Wilson, resulted in a contract that ended a two-tier wage system set up as a temporary measure during contract negotiations in 1994, before BART management got “attached” to the system. Under the two-tier system, which tackled a temporary budget shortfall, new workers would never haven caught up to the wage scale of more senior workers. BART’s first strike was in 1973, the year after the system opened.

In other contract years, sixty-day cooling offer periods have provided enough additional time to negotiate an agreement – which, in 2001, included work rule changes, primarily dealing with employee absenteeism, that achieved important cost efficiencies — and avert a strike. In 2005, BART workers agreed to a settlement that increased the amount they paid to their healthcare benefits, providing the District with approximately $100 million in savings. In 2009, at the depth of the recession, when ridership and revenues were down, unions agreed to a contract that saved the District a further $100 million and included pay and hiring freezes and caps on employer benefit contributions. The President of BART’s Board of Directors stated he was “extremely pleased” with that cost-cutting agreement.

None of these negotiations suggest that BART employees relish the prospect of a work stoppage. There’s a good reason that BART strikes are so infrequent. In common with most public sector workers, the members of BART’s three unions really have no interest in striking. On the contrary, these transit professionals want to work – their day jobs are about serving the transit riding public and ensuring a safe commute. That is why BART strikes, like the two four-day strikes we have just gone through, are very much the exception.

Let’s also remember that this time round the second strike in particular should never have happened. In order to avoid a second strike, the unions offered to submit remaining issues of disagreement to expedited binding arbitration but BART management said “no” – the unions must accept its sweeping work rule revisions – including safety rules – or the entire deal is off. Under the constitution of one of the BART unions, locals are required to offer to take issues of disagreement to binding arbitration before exercising their right to strike — an attempt to resolve bargaining stalemates fairly, and with the assistance of 3rd party neutrals, minimize service disruptions and the inconvenience that strikes bring to the community. The union settles about 98 percent of contract negotiations without strikes.

But this was insufficient to avert an October strike. In addition to turning down the arbitration offer, BART management injected “poison pill” terms at the last minute – which it knew the unions could never accept — to kill off any chance of avoiding a strike. Thus, BART management negated the best course for both sides and the transit riding public. Management was counting on negative public sentiment towards the unions (which, through a sophisticated media campaign, it had done much to encourage) to replace its obligation to bargain in good faith. It had hoped that second strike would end in no-strike legislation, only to end up with a settlement similar to the one that management could have gotten the previous week through arbitration without forcing a strike.

Throughout the dispute, the mainstream media has stressed that transit workers are prohibited from striking in other states and cities. But for the most part, they are banned from striking in these jurisdictions not because they are defined under law as “essential services” – beyond a few key occupations, U.S. labor law rarely distinguishes between essential and non-essential services – but because many states ban all public sector workers from striking. In some states with public sector strike bans, binding arbitration is not permitted or is limited in a way that tilts fair contract decisions away from employees.

The key issue is the standards under which the disputes are arbitrated. If the process is rigged, as it is in several states, then employees are often the victims of a process titled towards management. Binding arbitration isn’t supposed to work this way – both sides must have some “risk” on the table and therefore come to the process with fair and reasonable demands – yet an unfair process is the norm in too many states. Most U.S. states that ban public employees from striking lack a fair binding arbitration process.

Some states, such as New York, which has been cited as a model for the Bay Area, that ban public sector strikes impose draconian penalties on unions and workers that violate the strike bans. Severe penalties have been enforced even when workers have been forced into striking because of management’s failure to bargain in good faith, as happened with transit workers in New York City in December 2005. Following a 60-hour stoppage, the transport workers union local was fined $2.5 million and lost its automatic dues check off for nineteen months – thereby crippling its ability to effectively represent its members – while 38,000 union members were fined for striking and the local union president was jailed for ten days. The International Labor Organization – a tripartite organization that usually reserves harsh comments for the world’s worst labor rights violators — subsequently took the unusual stop of criticizing the draconian monetary penalties of the “Taylor Law” and the imposition of criminal sanctions against a union official for participating in a peaceful strike.

What’s more, it’s far from clear that the Taylor Law has achieved its intended goal of reducing strikes. It failed to prevent major transit strikes in 1980 and 2005, and, according to the New York Public Employees Relations Board, between 1967 and 2002, the state saw roughly 250 illegal public-sector strikes. Whatever the failings of the current system of collective bargaining at BART, repressive laws such as the Taylor Law or those with arbitration systems heavily bias against workers are not the correct path for the Bay Area.

Banning BART strikes is simply a bad idea. In a state like California, where workers have long enjoyed strong bargaining rights, this would represent a rollback of fundamental rights, reminiscent of the tactics used in more conservative states. However, banning BART strikes without a fair arbitration process would destroy genuine collective bargaining, and that would not only be bad for BART employees, but also for Bay Area commuters and the entire BART system. If genuine bargaining is destroyed, BART management and its Board of Directors – who between them have little real life experience of running a mass transit system — will have free rein to make the kind of ill-considered decisions related to employee and rider safety that they have repeatedly made in recent years.

What’s the Correct Way Forward for the Bay Area?

California is not without other options. The governor already has the power to call for a contract extension, fact-finding inquiry, 60-day cooling off period and use the considerable powers of his or her office to bring about consensual agreements. In this round of negotiations, the public needlessly suffered because of BART management’s strategy to force a strike, and through it PR campaign, to pit its riders against the front-line employees. BART management had the option of bargaining in good faith and negotiating a fair settlement, but for months it stalled and obstructed the process.

After the events of the past few months, it is easy to propose taking away the right to strike from BART employees. But a discussion about banning BART strikes is the wrong conversation to be having at this time. Instead, we need a proper inquiry into why the bargaining process was so dysfunctional and a conversation about rebuilding labor-management trust at BART so that any future bargaining disputes can be settled peacefully and consensually, not after five months of stalled negotiations and two disruptive strikes. A strike ban without a thoughtful conversation about the process and without fairness is bad public policy and would likely cause more problems than it would solve.