Whom Would Jesus Rent? 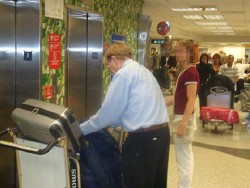 Closeted anti-gay right-wing Christians never seem to learn. George Rekers, a founding member of the Family Research Council, just discovered the price of hypocrisy. He was caught by a Miami News Times photographer returning from a vacation in Europe with a male escort he hired on Rentboy.com, which bills itself as “the world’s largest gay escort and massage site.”

A Baptist minister and professor of psychology at the University of South Carolina, Rekers is also involved with the National Association for Research and Therapy of Homosexuality (NARTH), an anti-gay “professional, scientific organization that offers hope to those who struggle with unwanted homosexuality.” Doesn’t sound like he was doing much struggling with it on his trip.

Rekers recently testified against allowing queers in Florida to adopt children. He and a colleague were paid $87,000 in taxpayer money by Attorney General Bill McCollum, who is now running for governor, to be “expert” witnesses at an appeals hearing after a court struck down the state’s longstanding ban on gay adoptions. An equal opportunity bigot, Rekers also said that Native Americans should be banned from adopting since they tend, in his words, to be mentally unstable and to abuse alcohol.

Rekers says he hired the 20-year-old rent boy, who has been identified in press reports as both “Geo” and “Lucien” (though the Advocatesays his name is Jovanni Roman), because “I had surgery, I can’t lift luggage.” According to a press statement, “Professor Reker’s family, local friends, and even another university professor colleague have offered to accompany him on trips to life luggage.” Guess none of them were available for an all-expense-paid trip to London and Madrid.

Then, too, if “Lucien” was hired to handle the luggage, why was Rekers pushing it in a trolley when the photographer caught sight of them?

“He was not involved with any illegal or sexual behavior with his travel assistant,” the statement continued. And whose word do we have on that?

Before he took down his Facebook page, Rekers responded to a message from blogger Joe.My.God: “If you talk with my travel assistant you will find I spent a great deal of time sharing scientific information on the desirability of abandoning homosexual intercourse, and I shared the gospel of Jesus Christ with him in great detail.”

Not exactly my idea of foreplay, but whatever gets the job done.

He also denied that he is queer. “My hero is Jesus Christ,” he wrote, “who loves even the culturally despised people, including sexual sinners and prostitutes. Like Jesus Christ, I deliberately spend time with sinners with the loving goal to try to help them.”

I can just see it now: Jesus sitting at his MacBook checking out the boys on rentboy.com. Whom would Jesus choose?