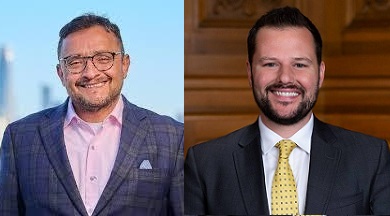 Mayor Breed’s appointment of Assembly member David Chiu as City Attorney has ignited the long anticipated campaign to replace him. While the field includes other candidates the city’s next assembly member will either be David Campos or Matt Haney.

Campos has been through this before. I wrote on September 16, 2013 (“Campos, Chiu Head for 2014 Assembly Showdown”) that it would be “the city’s highest profile state legislative race since Mark Leno took Carole Migden’s Senate seat in 2008.” It was. I wrote a lot of stories about that election,  which  Chiu  narrowly won.

Governor Newsom has not set an election date but the primary will likely be in late January or February 2022. The decisive runoff (assuming nobody gets 50% of the vote in the primary) will be in March or April.

Here’s my take on the race.

Campos has a remarkable life story. Born in Guatemala, at 14 he illegally emigrated with his mother and sister to Los Angeles to join his father who arrived two years earlier. He arrived speaking little English but became so educationally proficient as to get accepted to Stanford as an undergraduate and then Harvard Law School.

Camps followed his educational prowess with professional success. He then entered politics, winning  a tough D9 Supervisor’s race in 2008.

Campos is a proven vote getter in the assembly district. His strength in D9, which includes his home neighborhood of Bernal Heights, takes on added weight in a lower turnout spring special election because D9 will likely have the city’s highest percentage voter turnout.

As a prominent gay leader Campos is also strong in D8. D8 will rival D9 in top voter turnout for the special elections.

In 2014 the question was whether D8’s LGBTQ moderates would back the progressive Campos over the more moderate Chiu. Many did. And with Haney also aligned with the city’s progressives LGBTQ moderates citywide are even more likely to go with Campos in this race. Campos’ efforts to secure moderate LGBTQ votes is helped by D8 Supervisor Rafael Mandelman’s endorsement.

Campos is running to be the only Latino in Northern California’s state legislative delegation. San Francisco has not elected a straight white male state legislator since Kevin Shelley in 1996.

Campos has been largely out of the public spotlight in San Francisco since leaving the Board at the end of 2016. Yes, he’s been on city ballots when winning a seat on the San Francisco Democratic County Central Committee (he was elected chair of that body) and he is Vice-Chair of the California Democratic Party. But a lot of voters don’t follow those offices and pay more attention to what gets reported in local media.

When Campos ran in 2014 he could point to key votes on the Board—such as the controversial short-term rental legislation—- where he differed from Chiu. But Campos’ positions on major local issues are unknown to most voters. Nor can he run as the clear progressive as he did in 2014 because Haney also has strong progressive credentials.

Campos may be best known to many as the Chief of Staff for District Attorney Chesa Boudin. A lot of non-progressive voters will use that association to pick between two progressive candidates—and most will choose Haney.

In three races—School Board in 2012 and 2016 and D6 Supervisor in 2018—Haney has assembled extremely broad electoral coalitions. His 63% victory margin in 2018 far exceeded expectations.

Haney is a campaign machine. He reminds me of Scott Wiener in the 2010 D8 Supervisors race, where he was literally knocking on every door in the district. Haney is already working day and night to secure endorsements and votes.

Haney has sponsored a lot of successful legislation in less than three years on the Board. And likely has gained more San Francisco Chronicle coverage for his work—on toilets, trash cans, and a ballot measure to reform DPW—than any supervisor in their first years.

So whereas many voters are not familiar with David Campos, few need an introduction to Haney.

Haney has a broader electoral coalition than David Chiu had in 2014. His consistently progressive voting record includes stands aligned with moderates, such as his endorsing former Mayor Ed Lee.

Haney has a strong African-American electoral base. He is a close ally of both Board President Shamman Walton and Vice President Kamala Harris, and was even endorsed in his 2016 School Board race by then-President Barack Obama.

Haney also has strong support in Chinatown. He has worked hard to build support in this neighborhood (Rose Pak led Campos’ 2014 assembly campaign in Chinatown and she is no longer available to help him).

Haney also has a much stronger tenant base than Chiu had in 2014. Chiu’s Assembly leadership on tenant legislation makes it easy to forget that tenant activists overwhelmingly backed Campos in 2014. Whereas Campos dominated the tenant vote against Chiu, Haney’s 100% tenant voting record will at least split the tenant-focused electorate.

While a Campos victory depends on outsized turnouts from core areas, Haney gets support throughout the district. Haney’s record puts him closer to Chiu’s Assembly voting pattern than Campos. This is particularly true on his supporting building new housing for all income levels.

While some yimby’s recently attacked Haney for joining a unanimous vote to stop a misguided Tenderloin housing proposal, in 2012 supervisor David Chiu led the effort to kill new housing at 8 Washington. Yimbys’ typically blame Aaron Peskin for killing the 134 unit project but Chiu led the fight at the Board (he and Campos were part of the three opposition votes) and then when 8 Washington was stopped  at the ballot.

Haney is far more likely to be aligned with David Chiu’s record on housing issues in Sacramento than is David Campos.

As noted above, San Francisco has not elected a straight white man to the state legislature since 1996. San Francisco voters who prioritize political diversity will back a gay Latino over Haney.

Haney’s success at generating media coverage has led some to charges that he is a political grandstander. Some also view him as an ambitious white man always seeking higher office.

Haney will also be blamed for ongoing public drug dealing in the Tenderloin. It’s a completely unfair charge—-he has regularly called for more police enforcement and has no legal authority over the SFPD—but I’ve seen enough tweets blaming Haney for the situation to know it’s a political liability.

But where will anti-Haney voters go in a runoff? A runoff when his opponent is Chesa Boudin’s chief of staff? My sense is that most will go with Haney because that gives Mayor Breed the power to appoint a replacement more to their liking (that appointee must face voters in November 2022).

My Way Too Early Prediction

I see this race decided by voter turnout. If nothing else were on the ballot turnout will still far exceed the 21% turnout we saw recently in the East Bay Assembly special election to replace Rob Bonta. All district voters will get mailed ballots and the race will get major media attention.

But the assembly special election is unlikely to be alone. It is likely to be joined by the School Board recall also on the ballot and/or the District Attorney recall if it qualifies. Not knowing what will also be on the ballot in the decisive runoff prevents a clear prediction on the race.

But I do see a larger turnout benefiting Haney. He draws votes from across the city and from moderates and progressives alike. Campos has a strong base in the two districts that will have high turnout, and their disproportionate voting power along with strong support from LGBTQ moderates is the key to his winning.

Campos-Chiu featured two Harvard Law grads. Now we have Campos facing Haney, a Stanford Law graduate. Most top law school grads work to help the rich. San Francisco is fortunate to have a choice between these two leaders who have chosen to instead work for progressive change.