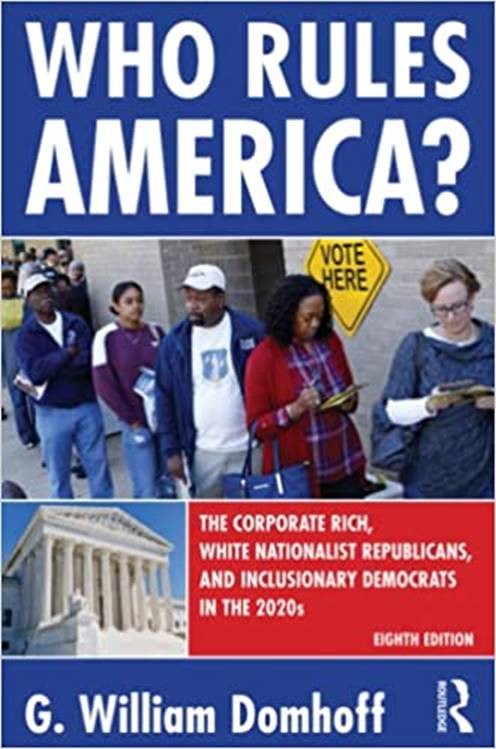 A No Holds Barred Look at American Governance

William Domhoff originally published Who Rules America in 1967. It was a huge success. Now out in a  revised eighth edition, Domhoff’s key conclusion remains: powerful corporate and wealthy interests still control American economic policies. This is just one of the many provocative insights Domhoff reaches in his landmark book.

I do not use the term “landmark” lightly. Domhoff was among the first to document America’s control by a power elite. C. Wright Mills popularized that term a decade earlier but Domhoff laid out the facts proving the case. Domhoff’s new edition connects corporate and elite power to the now rising forces of white supremacist Republicans and the GOP’s war on democracy itself.

Like Isabel Wilkerson’s brilliant book Caste, Domhoff exposes an America that few are taught about in school. A nation where wealthy and corporate interests have effectively controlled economic policies since 1938 (and if you doubt that conclusion, read the book).

The Corporate Rich and Upper-Class

American politics focuses more than ever on which major political party controls government. This is understandable given the widening policy differences between the nation’s Democrat and Republican parties (and the fact that a majority of whites have backed the Republican presidential candidate in every election since 1964).   But Domhoff reminds us of something that typically gets overlooked: even many “progressive” Democratic leaders come from the same elite schools and corporate backgrounds as their Republican counterparts.

Barack Obama “attended one of the 10 wealthiest schools in the country through the fifth through the twelfth grades.” Obama’s maternal grandmother was “one of the first female vice-presidents in a large Honolulu bank.” 90% of the students were white, and Obama spent eight years connecting with the kids of wealthy business leaders. Hillary Clinton is the only major party presidential candidate in the 21st century to graduate from a public high school.

We are so focused on where politicians stand on issues that their elite backgrounds are taken for granted. Yet the presidencies of Democrats Bill Clinton and Barack Obama were shaped—and I would say undermined—by their relationships with corporate and wealthy allies for economic policies. Its painful to recall how Obama bypassed the populist economic appeals of his 2008 campaign and aligned himself with corporate banking interests—and Clinton was even worse.

Domhoff details “how the power elite control government.” His conclusions are hard to refute. Since 1938 (!) a conservative coalition has reduced union power, increased social and economic inequality, and created an America with less social benefits than any other industrialized nation. Nearly all of the “progressive” gains have occurred without reducing the power of the corporate and wealthy elite.

When we consider the political forces that have held up passage of a Build Back Better bill that benefits the vast majority of Americans, we immediately think of Senator Manchin. But the entire Republican Party and corporate and elite interests also oppose a bill benefiting the majority.

And on economic and social welfare issues they almost always get their way.

Yes, There is Hope

Despite over seventy years of fundamentally conservative economic policies Domhoff sees hope. He finds it in an expanded electorate of non-white voters and among white voters who favor inclusion and economic and social justice. He recognizes the threat that anti-democratic, white supremacist forces pose to the nation’s democratic future. He does not diminish the risk that enough white voters will favor a system of anti-majority rule that particularly disenfranchises people of color. Yet he shows the labor movement of the 1930’s and the African American civil rights movement of the 1960’s seemingly came out of nowhere to upend political expectations.

He has a very perceptive analysis of how Biden/Harris won the 2020 election. He shows that notwithstanding the push against democracy, progressive progress is still possible in the November 2022 elections and beyond.

I strongly recommend this book. It’s 199 pages of fact-filled political analysis. Domhoff does not offer gripping personal stories of the daily struggles of low-income or middle-class workers. Instead, he equips readers with the facts and analysis needed to win political debates.

This approach may be “old-school” in an era when people engage in political arguments via tweets. But Domhoff’s teachings in Who Rules America? are more relevant than ever in 2022.