Who is Jack Hirschman, Poet Laureate of San Francisco? 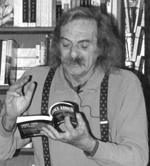 Last Thursday, 72-year-old San Franciscan Jack Hirschman was inaugurated as the fourth Poet Laureate of San Francisco, and several stories have already been written about Jack, but all have presented only a two-dimensional image of the real person. That Jack supported Matt Gonzalez for mayor, that he’s lived an alternative lifestyle (the Chronicle story used “bohemian,” a word that went out of style in the 1960s), that he’s published numerous books — all have been mentioned in the various accounts.

When our newest Poet Laureate speaks, his thick East Coast accent gives him away to reveal his New York roots, where he was born in 1933. Jack moved to San Francisco in 1973 after a brief university teaching career he left in the 1960s.

But who is Jack Hirschman?

Jack Hirschman is a passionate social justice activist who shares with his friends his warmth and affection. He opens his heart in discussions to share his feelings about the injustices of the world, and offers a hug when you greet him and a hug when he leaves.

As an active member of the League of Revolutionaries for a New America, he travels extensively for speaking engagements and to promote his plethora of published poetry, including several months a year which he spends in Europe. And wherever he goes, Jack is greeted as what one person describes “America’s most important living poet.”

Whenever I talk with Jack and the subject matter steers to poetry, Jack expresses his admiration for the three San Francisco Poet Laureates who preceded him, but he is most fond of 86-year-old Lawrence Ferlinghetti who he speaks of with reverence.

During last Thursday’s press conference and inauguration, Jack described himself as follows in his acceptance speech:

“Philosophically, I am an internationalist who knows that neither homelessness and poverty globally and specifically here in San Francisco, which the Mayor is much concerned with, as well as war and street violence, will ever end until and unless the wealth of this world is re-distributed and/or appropriated for the benefit of all, according to our needs as human beings. All of my poetry and intellectual expression is in one way or another directed to that end. And since I believe that all human beings are poets in fact, and that the writing of a poem is the most powerful action given to humankind (because unbuyable and unsellable in essence, and because a child of 5 years and a man or woman of seventy years, in the act of writing a poem, evoke the equality that is love at the heart of the world), I write to unfold the future of that equality with all my brother and sister human beings.”

Other accounts made note of Jack’s insistence of and persistence in speaking out about the plight of the homeless, yet none of the accounts recalled Jack’s reading of his 1987 poem simply called “Home,” which he read at the inauguration. In case you missed the broadcast on SFGTV and you haven’t read the piece, here it is in its entirety:

In doorways, in alleys, at the top

or, if lucky, in plastic sacks,

after another day of humiliation,

where fire? where drink?

damned stiffs in a drawer

soon if, and who cares?

our hands finally closed in clench

after another day panhandling,

at the feet of beds, can belch, fart,

have hospitals they can be taken to,

they’ll come out of houses and sniff

us dead one day,

in an American city

reknowned for its food and culture.

The concrete is our sweat hardened,

the bridge our vampirized blood;

the downtown, Tenderloin and Broadway lights —

our corpuscles transformed into ads;

our pulse-beat the sound tengtengendeng

of coins piling up on counters,

our skin converted into dollar bills,

our heart — the bloody organ the State

that’s become a national circus of the damned.

that has plundered our pockets and dignity,

O enterprise of crime that calls us criminals,

terrorism that cries we are fearful,

greed that evicts us from the places we ourselves have built,

miserable war-mongery that sentences us to misery

and public exposure as public nuisances

to keep a filthy republic clean —

this time we shall not be disappeared

in innercity ghetto barrio or morgue,

this time our numbers are growing into battalions

We want the movie houses from midnite til dawn!

We want the churches opened 24 gods a day!

We built them. They’re ours. We want them!

no more rain-soaked dirt in the mouth,

no more kids with death-rattling teeth

we the veterans of your insane wars,

the factory old: spat-out phlegm from the sick

Instead of raped respect, jobs

with enough to live on!

Instead of exile and eviction in this,

our home, our land,

Homeland once and for all

for one and all

and not just this one-legged cry

on a crutch on a rainy sidewalk.

When I talked with Jack on Thursday night, he noted that while the mayor may have stated he commends those who disagree with him, Jack and I disagreed on our perceptions of how the mayor deals with criticism. Jack feels the mayor easily deals with critiques, but it has been my experience that Mayor Newsom has great difficulty dealing with criticism, indeed, is incapable of understanding contentiousness and is taken aback when so confronted. But one thing Jack and I agreed on is that Newsom probably knows very little about poetry and hence his reliance on the senior William Newsom for advice on picking Jack for the position of Poet Laureate of San Francisco.

While the position is symbolic, Jack feels it is a tremendous honor and was and still is excited about representing San Francisco and feels the honor is a victory for working-class people of The City. Additionally, Jack leaked inside information to me that there might just be a possibility of him receiving a small honorarium for his position. And as Poet Laureate of San Francisco, Jack Hirschman wants to organize an International Poetry Festival of San Francisco and invite other social justice activists worldwide to participate. Jack’s first thought for a location was the Palace of Fine Arts.

To learn more about Jack Hirschman, visit LRNA.org, where you will also find an email link to request Jack’s presence at an event you are planning. I know Jack would be thrilled to speak so don’t feel hesitant about inviting him.

Finally, my thanks to Tony Robles of Manilatown Heritage Foundation for introducing me to Jack, and congratulations to Jack Hirschman, Poet Laureate of San Francisco — his poetry and his deep, booming voice sound the call for social justice for all.