While the Economy Burns, Bush Babbles On About Religion 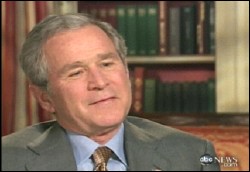 Can you believe that George Bush is a religious moderate? That’s the image he projected a few nights ago in an interview with Nightline’s Cynthia McFadden. I’ve never thought Bush was a Christian fundamentalist. He aligned himself with the wealthy televangelists and their extremely huge congregations in order to win the presidency. He never bought their literal interpretation of a Bible that, among many other things that most people today would find objectionable, directs men to have many wives, to rape and kill neighboring idol worshippers, and to stone their own disobedient children to death.

“No, I’m not a literalist,” Bush said, “but I think you can learn a lot from it, but I do think that the New Testament for example is … has got … You know, the important lesson is God sent a son.”

On the hot topic of evolution versus direct creation, Bush again stands firmly in the middle ground and not with those who elected him: “I think you can have both. I think evolution can — you’re getting me way out of my lane here. I’m just a simple President. But it’s, I think that God created the earth, created the world. I think the creation of the world is so mysterious it requires something as large as an Almighty and I don’t think it’s incompatible with the scientific proof that there is evolution.”

According to the outgoing President, this God he worships is the same as the one revered by others around the world: “I do believe there is an Almighty that is broad and big enough and loving enough that can encompass a lot of people.” Even queers?

George Bush is not an intellectual. I didn’t need the Nightline interview to realize that. He’s never been the brains behind the Administration.

What troubles me is that Bush junior is a lame duck President who will leave office never having to answer for any of the horrible things he’s done to this country, such as invade two nations without provocation, authorize spying on American citizens, detain prisoners at Guantánamo, and trash our civil rights via the Patriot Act.

An interview on religion evades the real issues that he should be grilled on: His possible pardons before he leaves office, his lying about weapons of mass destruction, and his responsibility for our wrecked economy. Even in these last days of the Bush regime, American journalists still don’t have the cojones to hold him accountable for his actions.

They would rather waste time asking him about whether he thinks the decision to go to War in Iraq was connected to his religious beliefs. In case you’re wondering, it wasn’t. According to Bush, it was “a war of good, decent people of all faiths against people who murder innocent people to achieve a political objective.”

People who murder innocent people? Such as those who invade another country to build an oil pipeline to feed America’s biggest addiction?