Where O Where is the National Guard? 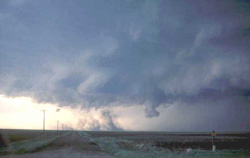 Blue Thoughts From a Red State

Whatever it was, it hit Lawrence, Kansas hard. According to some residents it was a tornado. But officially, claims the National Weather Service, it was called a microburst: an intense explosion of wind, usually resulting in straight-line gusts that can reach highly destructive speeds, in some cases more dangerously so than a tornado. No matter what the name, it’s nearly one-hundred mile per hour winds cost the city five million dollars in damage in the space of less than ten minutes Sunday Morning, March 12. Two doors down from my place, the white brick house lost its roof. Next to that, a giant birch dove headfirst through a neighbor’s living room walls. Luckily, there were no major injuries. For days afterwards, Lawrencians could be seen with chainsaws and work goggles, cutting away at random tree parts scattered about their property. (There is, to say the least, spare firewood in Lawrence—if you’re interested in that sort of thing). What was noticeably absent, however, was any sign of the Kansas National Guard. And that had nothing to do with their interest—or lack thereof—in chopping logs for the old wood burning stoves. Rather, they just weren’t in town—in fact, they’ve mostly left the state…for Iraq.

In the aftermath of Hurricane Katrina—and as Kansas prepares for a hellish Tornado season (March is extremely early; the first storms don’t usually hit until May)—locals, politicians and others nationally are beginning to sound the alarm. Where, they are asking with ever-intensifying concern, are our national guardsmen and women in times of disaster? They are, after all, a military branch designated primarily for the duty of helping around the homeland. Struggling to win the unwinnable in Iraq, Bush and Company seem to have forgotten that the National Guard ought to be out in full force nationwide—helping to pass out supplies, clear debris, evacuate towns in front of wildfires and any other aid civilians under duress need so desperately.

Last fall, Kansas Governor Kathleen Sebelius reminded Donald Rumsfeld of this important factoid regarding National Guard units. In a letter she remarked, “The Guard was critical to responding to recent blizzards and floods in Kansas, yet its ability to respond to similar situations is being diminished by a lack of equipment. We must,” she went on, “be able to maintain a high level of readiness, because no one can know when disaster will strike.” Well, it better not strike too hard this calendar year: it’ll have to be penciled in at some much later date. And though Rumsfeld likely chucked her letter in the wastebasket without so much as an email in response, her point ought to be trumpeted around the halls of Congress, and in the offices of the Administration.

Sebelius was not joking, either. In terms of personnel, for instance, the guard is crucial to getting people onto the ground after disaster strikes. Last Spring, Montana’s governor called for that state’s National Guard to be shipped home from Iraq in desperate preparation for statewide wildfires. After the Hurricanes last summer, officials in both Mississippi and Louisiana expressed concern about the lack of available humanpower. “Missing the personnel is the big thing in [Hurricane cleanup efforts]. We need our people,” warned Lt. Andy Thaggard, of the Mississippi National Guard, which had a group of more than 4,000 troops in central Iraq last August. Louisiana likewise had a brigade of almost 3,000 guardsmen and women in Baghdad. Though not dire yet, Kansas Guard officials have deep-seeded concerns as well. “We’re not to the point where we can’t perform a mission—I don’t want for one minute for people to think that. But,” says Kansas spokeswoman Joy Moser, “We’d have to be pretty creative.” Creativity is a nice thing, but should we leave our disaster preparedness standing on the whimsical limb of hapless creativity from an understaffed unit?

Compounding the alarm is the lack of proper equipment. It to is somewhere in the Iraqi desert—and it comes back to visit even less often than the troops. National Guard commanders across the nation estimate they’ve left 35 billion dollars worth of equipment in Iraq. The federal budget, however, only allocates 20 billion dollars for replacement. Equipment, as Sebelius explained, can be almost more important than the soldiers themselves. Though the Lawrence microburst, tornado or whatever-you-want-to-call-it doesn’t rise all that high in the annals of natural disasters afflicting this city, if it had been worse—and it may soon be worse—Lawrence might have required equipment that, instead of being here, is carrying shells and bullets through the streets of Kabul. Lord knows, they don’t need more ammo in that neck of the woods.

And, last fall, aid workers cleaning up after Katrina definitely needed the vehicles, heavy machinery and other equipment to handle the mess left in the wake of the Hurricane. Though other states chipped in eventually, in the immediate aftermath the Louisiana National Guard publicly complained that too much of its equipment was in Iraq. A local ABC affiliate reported that many high water vehicles, Humvees, refuelers and generators were ten thousand miles away—and might have to be left there, even if the Louisiana Guard returns.

A month ago, President Bush marked the anniversary of the Iraq war with a “commemorative speech” in which he was careful not to mention the word “war” once. Instead, he called the day “the third anniversary of the beginning of the liberation of Iraq.” Cute. But what about the insurgent attacks, the car bombs or the mounting Iraqi deaths? What about the possibility of civil war? And what about the need for National Guardsmen and women on the home front? None of this made its way into his “historic” speech. The fact is, there are more than enough reasons for getting out of Iraq now—and many of them were reasons not to go in the first place. One—perhaps initially ignored and continually underrated—is the increasing need for National Guard units to be able to fulfill what their charter outlines for them: being National helpers, rather than foreign police officers.

Dick Cheney, speaking to the press at the same commemorative outing, did his part to uphold the stubborn inability to admit failure by refusing to question the accuracy of his comment ten months ago claiming that the Iraqi insurgency is in its “last throes.” Ludicrous as this is, he maintains his comments were “basically accurate, reflect[ing] reality.”

The reality, however, is that the Iraq war is starting to have direct effects on the safety of everyday Americans in a new, more hard-hitting manner. And maybe that is a good thing. Certainly in Lawrence, disaster relief hasn’t been as necessary as it was in New Orleans and the Mississippi basin. Without the National Guard nearby, however, this state is more or less wandering naked, vulnerable to the quick-striking devastation of spring weather. Next time a microburst blows up over the city, Kansas may need a few extra chainsaws. Let’s hope they’re not all in Iraq.