Where is California’s Barack Obama? 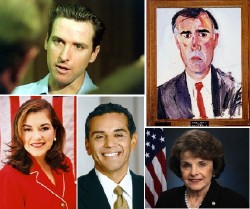 Fresh off a thrilling presidential campaign, California Democrats face a Governor’s race without a candidate that can rally a multi-racial, class-crossing grassroots base. The three most talked about candidates — Dianne Feinstein, Jerry Brown and Gavin Newsom — neither offer a sharply new direction nor provide the transformational message that was at the heart of Barack Obama’s appeal. Why can’t a Democrat do in California what Barack Obama did nationally? Why are California’s labor unions, environmentalists, and women’s advocates not rallying behind a strong, progressive, grassroots candidate? Such a candidate has a better chance than Obama faced against Hillary Clinton, and the Democratic primary winner in 2010 will almost certainly be our next Governor. It is clear that activists need new candidates in this race. One possibility is Congresswoman Loretta Sanchez, who said last week that she is still considering the Governor’s race. Antonio Villaraigosa and others should also be encouraged, as California desperately needs a leader who can mobilize the electorate behind a call for change.

The disconnect between California’s massive enthusiasm for Barack Obama, and the lack of a grassroots candidate for the 2010 governor’s race, is striking. Although California faces major cuts to education, health care, transportation and the social safety net, the state’s leading grassroots constituencies are seemingly on the sidelines while individual politicians determine our next Governor.

None of the current field appears likely to galvanize a grassroots base, or to be willing to take on the “third rails” of California politics: massive prison spending, Prop 13 funding restrictions, or the need for major new education funding. Dianne Feinstein? She’ll be 77 years old on Election Day 2010, and she has long resisted, rather than supported, progressive change.

Jerry Brown just finished campaigning to defeat Proposition 5, which would have saved billions of unnecessary spending on the state’s prison industrial complex. This follows Brown’s television ads for the 2004 election, which helped narrowly defeat a reform of the draconian and extremely expensive “three strikes” law. Brown’s consistent coddling up to the prison guards union is the smoking gun showing that he is not a candidate for change.

Gavin Newsom came out against Prop 5 on the eve of the election, undermining his own “break from the past” image. He also spent another local election cycle opposing the very constituencies who an Obama-style grassroots campaign would need to attract.

Newsom’s gay marriage stance gave him an opening to be a major candidate for change, but he squandered this opportunity by failing to campaign across the state for “No on 8” among undecided or even negative voters. Unlike Obama, who prioritized outreach to the unusual suspects, Newsom tends to avoid audiences that do not agree with him.

As was true prior to Obama at the national level, it has been a very long time since California Democrats have gotten really excited about a gubernatorial nominee. It is hard for me to believe that the Democratic base does not want to bring the same type of change to Sacramento in 2010 that it brought to Washington DC this year.

One way for Democrats to generate excitement is to nominate a Latino and/or woman candidate for governor. Congresswoman Loretta Sanchez from Orange County has been mentioned, and she was in the Berkeley last week with her sister and fellow Congresswoman Linda Sanchez.

I asked Loretta Sanchez last week about her governor plans (Linda announced she is not running). She said she was “taking a look at the governor’s race in the next couple of months,” and that her decision would depend on two factors.

First, Sanchez needs to feel she can win.

Second, she needs to decide whether she has the “passion for doing the job.”

Is California ready to elect a Latina Governor? After voting overwhelmingly for an African-American president, and backing a woman candidate in the presidential primaries, Sanchez’s race or gender should not be a major obstacle.

Moreover, Sanchez has a 100% voting record on union issues, and will galvanize the labor community. Her base in Orange County gives her key support among more conservative Democrats and independents that sometimes vote Republican in governor’s races.

The Sanchez sisters have just published an inspirational book, Dreams in Color. Like Obama’s Audacity of Hope, the book lays the groundwork for Loretta’s message.

Sanchez has a very compelling personal story. The second of seven children from an immigrant family whose parents did not attend college, Sanchez was raised with strong values about blue-collar work She describes going to the supermarket with her family and putting grapes in the cart. Her mother removed the grapes, explaining that the family was supporting Cesar Chavez and the UFW’s grape boycott.

At the Center of Latin American Studies event that I attended last week, young people lined up to buy copies of the book; they would likely be excited to join a Sanchez gubernatorial campaign.

Is Villaraigosa an Option?

After a rough start that included a messy divorce, Los Angeles Mayor Antonio Villaraigosa has found his stride. Even his early and aggressive campaigning for Hillary Clinton did not prevent him from maintaining strong support among Obama loyalists.

Villaraigosa faces token opposition in his 2009 re-election race. Would he want to leave that position to run for governor in 2010? Would his campaign whiz, the appropriately named Ace Smith, be able to run a Villaraigosa governor’s campaign while also leading Kamala Harris’s Attorney General effort?

I felt in 2006 that 2008 was Obama’s time. Villaraigosa is strongly positioned to pick up the state’s next US Senate seat, but if he wants the powerful governor’s office, it ‘s 2010 or never.

Television and radio ads, rather than grassroots outreach, has typically dominated California governor campaigns. This expensive approach has eliminated many progressive candidates from statewide races.

But organized labor in California has the resources to back its own candidate for Governor, rather than relying on politicians’ self-selection. And the Internet can certainly be used to create a statewide field campaign that galvanizes the activist base.

While Loretta Sanchez and Antonio Villaraigosa evaluate their prospects, progressive groups need to focus on alternatives to Feinstein, Brown and Newsom. With the exception of Newsom on gay marriage, none offer a break from the past, and none will galvanize the Democratic base.

Barack Obama recognized in 2006 that there was an opening for change at the presidential level—progressives must recognize that California offers a similar opportunity in 2010.