Where are Progressives in the 2011 Mayor’s Race? 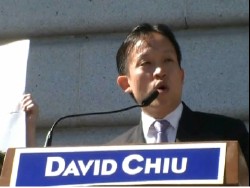 Last night’s meeting of the politically moderate Coalition for Responsible Growth was the first candidates’ forum of the 2011 Mayor’s race – and as President Rodrigo Santos proclaimed at the start, there are “no progressives” in the field. In large part, that depends on whether you call David Chiu a “progressive.” Bevan Dufty, Leland Yee, Michela Alioto-Pier, Phil Ting, Dennis Herrera and Tony Hall each gave their five-minute pitch to the CRG crowd – but Chiu (who Santos later told me is “not a progressive”) pulled a no-show for the event. On Tuesday, the Harvey Milk LGBT Democratic Club had a panel on “The State of the Left in San Francisco” – where Chiu appeared comfortable with his chorus of progressive critics. But while sounding progressive themes, Chiu offered ways for the Left to expand its appeal by stressing growth and small businesses. And if progressives simply view such advice as an attack, Santos will be proven correct – that the Left has no candidate in the 2011 Mayor’s race.

The mood was upbeat last night at the Coalition for Responsible Growth – a coalition of moderate business leaders, contractors and real estate developers. “In 2008,” said Director Mel Murphy, “our members put a lot of energy into [moderate] candidates – and we got our asses kicked.” That year, progressives swept all the competitive seats for Supervisor – with Eric Mar, David Chiu and John Avalos defeating Sue Lee, Joe Alioto and Ahsha Safai.

But President Rodrigo Santos said “the spirit of moderation is alive and well in San Francisco” last night – because the voters this past November picked “fiscally conservative Supervisors who will support generating jobs and construction.” Before introducing the field of candidates, Santos even asked why there are no progressives running for Mayor this year. “Are they all drinking the warm, cheap beer at Chris Daly’s bar,” he joked.

And the mayoral candidates certainly stressed moderate themes. Bevan Dufty talked about how he owns a tenancy-in-common (a “five-time condo-lottery loser”), and wants to make it possible for more TIC owners to condo-convert. Phil Ting spoke about tax incentives for property owners to install solar panels (rather than passing laws requiring them to do so), and Michela Alioto-Pier talked about her work on biotech tax credits. Dennis Herrera was probably the most progressive candidate to speak to the crowd, because he was the only one to even mention “addressing inequality.”

Chiu did not attend the evnt, but I asked Santos afterwards if he would count David Chiu as a “progressive.” No, replied Santos, because (a) Chiu was “instrumental” in getting Ed Lee appointed Interim Mayor and (b) the Mid-Market payroll tax exemption that Chiu has championed as a means of keeping Twitter from leaving San Francisco.

Of course, these two developments (both of which have only happened in the last two months) have provoked some progressives to criticize Chiu. With that mindset, along with moderates speaking triumphantly of a new era, one would expect the Milk Club’s panel on the “State of the Left” Tuesday night to either be a depressing wake — or a sectarian bloodbath.

You’d be pleasantly surprised. Despite fights on the Left which have always been there, said Tim Redmond of the Bay Guardian, “I cannot overemphasize how much better off the City has been with district elections.” Tim Paulson of the SF Central Labor Council argued that disputes among progressives are “relational” rather than ideological, and Supervisor Jane Kim said the rift is about “personalities not issues.”

David Chiu seemed right at home with this crowd, as he talked about his background as an immigrant rights attorney – and how, just like everyone else on the Milk Club panel, he first got involved in local politics because of Tom Ammiano. But while Chiu also talked about income inequality, he argued that it has not been at the center of debates – “because we have not had a great jobs, growth or economic strategy.”

Chiu has gained respect from moderates (and criticism from progressives) over the so-called “Twitter deal” – and he defended it at the Milk Club panel. “We tax business with a payroll tax,” explained Chiu, “which is a huge disincentive for jobs. It only affects 10% of all employers – and the ones who are exempt are the ones that put us in the mess we’re in (i.e., banks and the real estate sector.) … Progressives really have to think about how we help local businesses grow and thrive.”

If progressives view this as an attack – rather than constructive criticism – they will only confirm what their opponents are saying: that they have no mayoral candidate.

Meanwhile, back at the CRG event, Michela Alioto-Pier talked about how she was able to help biotech firms as Supervisor. “I went up against a very, very difficult (read: progressive) Board of Supervisors,” she said, “and I passed a Biotech Payroll Tax Exemption.” She then repeated “payroll tax exemption” to emphasize her point.

This made me wonder afterwards. Why are progressives giving David Chiu grief for a payroll tax exemption for net new jobs in the economically distressed neighborhoods of Mid-Market and the Uptown Tenderloin when in 2004 the Board passed Alioto-Pier’s legislation for a much less progressive biotech tax exemption – by a 7-4 vote.