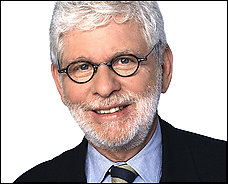 Why are newspaper opinion columnists so consistently baffled by the politics, technologies, and social mores of the 21st century? We’ve crunched some data, and we think we’ve figured out the answer: They’re old as hell.

The New York Times’ David Brooks is under the impression that the babblings of his Yale students reflect major generational trends. The Washington Post’s Richard Cohen thinks for some reason that it’s okay to assume interracial relationships probably make people “repress a gag reflex.” At the Wall Street Journal, Peggy Noonan was apparently the last person on earth to find out about the internet. It’s been a fun few weeks (months, years)—for us, at least.

But still, we’ve wondered: Why? Why are editors at these widely read, extremely reputable papers publishing pieces expressing bewilderment at the 21st century? And more importantly, why are respected opinion columnists writing these bizarre things?

We took a look into it, and it turns out it’s because they’re old.

We examined age and gender breakdowns of the regular opinion columnists at the country’s three most prestigious opinion sections—those of the New York Times, the Washington Post, and the Wall Street Journal—as well as the opinion stables from four of the largest press syndicates—The Creators Syndicate, Universal Press, King Features, and Tribune Media, which provide column material for many of the country’s smaller papers. (For now, we left off regular columnists for other sections of the papers.)

Of the 143 columnists we looked at, a scant 38 were women. Just as bad was the age distribution: Average and median ages on the whole hover around 60. Tribune Media Services had the oldest columnists: average and median ages are both around 64. The businessy Wall Street Journal, whose average columnist is a sprightly 56 years old (median 54), is the most youthful—although that’s still older than the paper’s average 48-year-old reader.

Individually, the oldest of the pack is Phyllis Schlafly, still cranking them out for Creators at 89. The oldest male columnist, Universal’s Nat Hentoff, is just south of her at 88. Other senior senior citizens of note include the Wall Street Journal’s Pete du Pont (78), and the New York Times’s comparatively youthful Gail Collins (67), who’s just 15 years older than her paper’s median 52-year-old reader!

But there’s hope! At least if you only read the Washington Post. That paper boasts the youngest male and female columnists. Stephen Stromberg is 30, and his colleague Alexandra Petri, 25, apparently singlehandedly represents American women under 35 years old.

A few caveats: We left out columnists whose ages we can’t ascertain (WSJ’s Mary Anastasia O’Grady; Creators Syndicate’s Austin Bay and Suzanne Fields; and Tribune’s Mary Sanchez remain cloaked in mystery). This analysis also weights evenly every regular or syndicated opinion columnist—weighting by number of bylines or number of outlets might have different results. (Though we doubt it!) All of our data is in this spreadsheet here. We also didn’t break down columnists by race or ethnicity, though it would almost go without saying that the vast majority are white.

But we think it’s pretty clear: Newspaper columnists are, statistically speaking, old dudes. This is unsurprising, since columns are usually bestowed on the tried, true, and grizzled. But if you’re staffing your back pages with almost all veterans, you’re missing out on a wide swath of important perspectives—like, for example, “The internet is a useful tool” and “I am not made uncomfortable by interracial relationships.”

This piece first appeared in Gawker.com