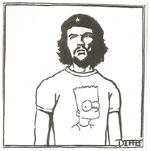 With a smoldering lead actor, an iconic subject and at least 24,000 miles worth of research, Walter Salles’ latest movie, “The Motorcycle Diaries”, appears poised for success. And the movie itself is a wonderful journey-a visual tour through a Latin America that rarely sees the light of multiplexes, let alone Hollywood’s gaze. But for the Che aficionado, the t-shirt wearers, or even the Cineplex revolutionary, the movie might not deliver everything it seems to promise.


The movie, which focuses on a man whose image has come to nearly surpass his legend, humanizes a myth and reenvisions a paradigm for Latin America. For this, creating a new perspective and a remarkable sense of place, Salles’ film is brilliant.

Gael Garcia Bernal is a young Ernesto “Che” Guevara de la Serna, the wealthy Argentinian medical student who became first a Cuban revolutionary, then a Latin American legend and CIA target, and, most recently, a t-shirt staple. Bernal is, arguably, one of the best young actors anywhere, and his Ernesto, “Fuser” to his friends, is at once likable, incredibly young, wise, and ready for something, though the power of that something depends largely on its ambiguity. The movie, based largely on the book of the same name, follows Ernesto and his older, though no more mature, friend Alberto Granado (Rodrigo de la Serna), on their voyage from Beunos Aires to the northern tip of South America. This is our point of departure: a trip with two men, a beat-up motorcycle, and an adventure to discover what makes their grand continent what it is. A trip, the narrator tells us, of two souls in love with the open road.

Before they’ve even gotten to their first stop, two things are quite clear. First of all, these are young and, relatively, wealthy men from wealthy and comfortable families. In the first of its two meager appearances in the film, the notion of revolution is mentioned in passing as the boys leave home. The thought is quickly shrugged off, and the point is subtle: upon leaving, revolution was hardly in the minds of our heroes, let alone their family’s. Secondly, one of the largest motivations for this trip is not so unfamiliar to many young men-the pursuit of women. Their first stop confirms this as they spend six days in Ernesto’s girlfriend’s palatial estate in Miramar. Here, while Alberto beds a maid the wealthy family calls “La Negra”, poor Fuser can’t seem to get anywhere with his cold and spoiled ladyfriend. This contextualization, though it seems minor, is ultimately of grand importance for the direction of the film. It paints a picture of an insular, South American, elite upper-class that mimics the Eurocentrism of elites the world over. When we finally leave Miramar we embark with the boys on a trip that may have made Fuser into Che and, eventually, Che into an icon worth worshipping. There is at least one certainty-they do not return to Miramar.

The movie is neatly broken into two parts, the first being the more light-hearted introduction to Latin America in all of its beauty, enormity and intricacy. It is in this first half when Salles lets his cinematographer, Eric Gautier, rewrite the tropes of South America. Gautier, whose other work comes largely from France, focuses on the greens, the grays and the browns of Argentina, Chile and Peru-a stark contrast to the vivid colors that have come to represent Latin culture for most of the world. Instead of the bright reds and yellows of condensed city-centers, Gautier and Salles’ Latin America is a muted affair, a stately and grandiose beauty with blurred whites, winding browns and the occasional comforting green. The first half of the movie also focuses less on the development of a particular consciousness in our characters, and, rather, on the way that the two of them deal with each other. Bernal’s Fuser is a young man in love, and the contrast of Alberto’s Lothario is light and entertaining. Their consistent mishaps, and the ways that they finagle food and hospitality, are whimsical and engaging, a sentiment that is echoed in the wide-open spaces that Gautier films so deftly.

Eventually, however, our travelers are faced with a harsh reality. The irony of this reality lies in the fact their very ability to travel, to discover, and to know Latin America is a function of their own privilege. It is a contradiction that persists today-those of us blessed with an ability to travel are perpetually at a loss for the ways in which we can rationalize our own privilege with the world we have set out to see. It is this moment that weighs on our heroes as they continue their travels through Chile and into Peru. The clarity of this moment rests on an interaction between Fuser and Alberto and two fellow travelers. As the four of them sit down over a fire, the two strangers, a husband and wife, explain why they are on the road-chased out of their home by a land developer. As Che and Ernesto listen, Gautier and Salles focus on the features of the man and his wife until they ask their crucial question, “and you, why are you traveling?”

At this point, the cinematography changes as well. Gautier’s camera continues to find the grays, whites, browns and greens of South America, but in this case he finds it in the people. In moments that reference John Irving’s “Grapes of Wrath” and the pictures that inspired that work (and, to a lesser extent, Lars Von Trier’s “Dogville” earlier this year), the camera freezes on the people and faces of Peru’s displaced history. The camera moves between color and black and white and the expressions that look back are more powerful for appearing frozen until we see a simple blink, or a flicker of light in someone’s eyes.

The second half of the movie focuses more on these instances, the points of contradiction that the travelers meet. The camera changes too-we are still presented with the wide-open spaces of Latin America, but there is always something smaller in the frame: an older man walking alone on the spine of the Andes, indigenous Peruvians on a dirt road with a cross, the intersection of Incan and Spanish walls with a young boy buffered in between. These are the moments in the film that are revelatory, and they are also the clues to the change in our characters, the awakening of an iconic consciousness.

Salles’ talent lies in telling a story that draws you in, and Gautier forces the viewer to understand the complexities of an entire continent. And, ultimately, this movie is a movie about place. As much as some people might want this movie to be about Che, or to be about revolution, it is much more of a testament to space and time and to the ways in which we configure ourselves within those dynamics. The Che we are given is an incredibly compassionate and introspective young man-a man torn between what he sees around him and finds incomprehensible, and his own place in that huge mess.

The conclusion that Salles brings us to, a symbolic climax at a segregated leper colony, is much less of a revelation that one expects from a film that is, otherwise, so subtly powerful. This moment of marked sentimentality is not only a departure from the film’s more articulate themes but also seems a concession to an audience that expects a certain heroicness from its heroes. What remains unclear is whether that heroism is a necessary statement from a movie that seems to stress the rarity with which a real hero arises from a world so determined to submerge them in its own grandiose space. In fact, I think the film is at its most powerful not when we see Fuser turn into Che in moments of heroism but instead when we see him in his more intimate moments of insecurity.

Ernesto is young, privileged, and idealistic-a combination that is not so rare. But what is it that makes him such a rarity, a real hero who eventually comes to embody everything that other young, privileged and idealistic people look up to? On this point Salles’ answer, though at times insightful, is insufficient, and, to some extent, diminishes the otherwise delicate and complicated images that he gives us. When people go to this movie, it is unclear what they will expect. But what they will most surely get is a jolt to their paradigmatic view of Latin America. Salles manages to recalibrate the popular vision of Latin America into one that is much more complex and fascinating than most available versions. Similarly, Garcia Bernal invests an icon with a tangible humanity that is often over-looked in historical myth-making. In the movie, Ernesto asks Alberto to imagine a different world-one where history’s revolutions and guns might have been reversed. The point, and Ernesto knows this too, is that the present makes that past unimaginable, and that the only way we can reimagine things is to reinvent the future. A revolution. One with guns. But with different heroes. Then, maybe, we can understand this place.