What Went Wrong in the L.A. Special Election? 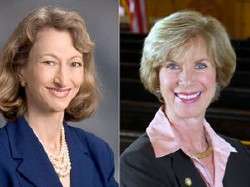 Last week’s special election in the 36th Congressional District (which includes the L.A. beachfront communities of Venice, Torrance and Redondo Beach) was a rare opportunity to send one of California’s most progressive Democrats – and a darling of the netroots – to Congress. But in a field of 16 candidates and a very low turnout, Debra Bowen came in third – lagging behind the second-place finisher by 706 votes. The July 12th run-off will now be a snooze-fest between the heiress of a Democratic political dynasty who has run a cynical, consultant-driven campaign – and a right-wing millionaire Teabagger who doesn’t live in the district, but is spending his fortune in what should be a safe blue seat. Needless to say, those of us who saw this election as Debra Bowen’s moment are deeply disappointed and disillusioned – and it’s important to understand what went wrong. No doubt, sabotage between Democrats contributed to the outcome. But no one really took Craig Huey seriously until Tuesday night when he made the runoff, and it speaks to the deep “enthusiasm gap” between Democratic and Republican base voters.

Conventional wisdom said the top two candidates to replace Jane Harman – who resigned from Congress to head the Woodrow Wilson Institute – were L.A. City Councilmember Janice Hahn, and California Secretary of State Debra Bowen. Both had represented parts of this “safe blue” district for years, and both have high name-recognition and political connections. We knew that no candidate in a crowded field would win a simple majority on May 17th, but the July runoff would surely be a Bowen vs. Hahn affair. There were 16 candidates running, but the other 14 would all be just an irrelevant sideshow in this race.

For Janice Hahn, this was just another stepping stone for higher office – as the daughter of the legendary L.A. County Supervisor (and sister of the former Los Angeles Mayor), had clearly been “shopping” for a race to run. She ran for a version of this Congressional seat in 1998 and lost, and then last year ran for Lieutenant Governor. Nancy Pelosi and much of the Democratic establishment lined up behind Hahn, as they figured she would have money to run a strong race – and once elected, be a “party-line” vote in Congress.

But progressives have learned the hard way that “more Democrats” is not enough. What Congress needs is “better Democrats” – progressive visionaries who will lead on issues, which can sometimes mean making the party leadership uncomfortable. For years, Debra Bowen had a stellar reputation among liberal activists in the state legislature, and then as Secretary of State – most notably on open government and voting machines, but also on issues like health care and the environment. To the Howard Dean crowd and the netroots, it was only a matter of time before they would work on Bowen’s campaign for higher office.

If this were a 2010 or 2012 election with normal turnout, Bowen would have been the front-runner – because her status as a statewide elected official, and endorsements from the Sierra Club and League of Conservation Voters, would appeal to casual voters. But with this being a 2011 special election, Hahn’s support from the Labor Federation – with their get-out-the-vote operation – gave her the upper hand. But still, no one expected the July run-off to be anything but Bowen vs. Hahn – with May 17th being just a trial run.

Enter Marcy Winograd, who many will now refer to as the Ralph Nader of this race – for taking progressive votes that would otherwise have gone to Bowen. Winograd had twice run against Jane Harman, in a protest run against the incumbent’s pro-war record. But while Harman was clearly more conservative than the district deserved, Winograd had failed to appeal beyond hard-core left-wing activists. And Winograd’s comments about the State of Israel as “institutionalized racism,” “occupation” and “extermination” barred her from being a viable contender in a district with a large Jewish population. Winograd was more of a Dennis Kucinich than a Howard Dean.

In a cynical and calculated move to goad Winograd into the race, the Hahn campaign sent a letter to Debra Bowen – asking her to sign a “pledge” to support the State of Israel. But it also condemned “anti-Israel rhetoric,” and specifically singled out statements Winograd had made in the past. If Bowen refused to sign it, she would have AIPAC and much of the pro-Israel lobby on her case. If she signed it, Winograd would enter the race. Bowen signed the pledge, and Winograd jumped in. In retrospect, she should have responded with her own “pledge” – but her response was enough to offend Winograd’s ego, and complicate things for everyone.

Everyone knew that Winograd’s presence in the race would take votes away from Bowen – but again, everyone thought that Bowen and Hahn would make it in the July run-off. In other words, it was a harmless sideshow – and when it was all over, a vast majority of Winograd supporters would turn around and support Bowen when it “really” mattered.

As the race heated up over several weeks, Hahn outraised Bowen – with money from landlords and corporate interests, and sent a deceptive hit-piece that slammed Bowen for taking money from oil companies. The latter was truly ironic – as Janice Hahn had recently flip-flopped on an oil severance tax for Los Angeles (voting against her own legislation at the L.A. City Council), after taking money from Chevron and Occidental. But it had the intended effect – Bowen’s poll numbers took a hit in the final days.

Meanwhile, no one seemed to notice (or care) that there were Republican candidates in the race. After all, the district had a solid 18-point Democratic registration edge – so they were just a sideshow. There was Mike Gin, the openly gay Mayor of Redondo Beach – as well as Mike Webb, the City Attorney of Redondo Beach. And then there was Craig Huey, a businessman from Rolling Hills Estates (i.e., not in the district) with $500,000 of his own money in the race. As a Teabagger, Huey had the backing of Republicans like Tom McClintock, Dana Rohrabacher and Chuck Devore – and he was quietly blanketing the district.

Hahn is expected to win the July run-off, but we expect turnout to be even lower. Huey can easily self-fund with another $500,000, and labor will have to expend its scarce resources to crank its turnout effort and put Hahn over the top. As blogger Marta Evry pointed out, Hahn will win the special election in July – but re-districting could change the demographics and make the district more Republican in 2012. Her complete analysis is well worth reading in full, but I’ll just quote one line from it: “Janice Hahn’s strategic choices, coupled with Marcy Winograd’s ego, may have created a perfect storm in which a to bring a previously unknown Tea Party candidate to national prominence.”

And that’s where we are. What started as a rare opportunity to elevate a public servant who the netroots had been waiting for is now your standard, boring run-of-the-mill special election between an unexciting Democratic hack and a dangerous Tea Party radical. No wonder people are cynical about politics. And no wonder we have a very wide “enthusiasm gap” between Democrats and Republicans – which manifests itself in voter turnout disparities. And it didn’t have to be that way …

EDITOR’S NOTE: While on vacation in April, Paul Hogarth spent a couple days in Redondo Beach – and did some volunteer canvassing for Debra Bowen in Venice.