What To Make of Seattle’s $15 Minimum Wage Plan 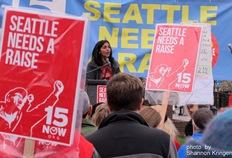 If you’re a low-wage worker in Seattle good luck figuring out how much you will earn under Mayor Ed Murray’s proposal to raise the minimum wage to $15 an hour.

In a news conference on May 1, an international day of worker protest and celebration, Murray unveiled a “minimum wage plan so complicated reporters can’t understand it,” as described by The Stranger, Seattle’s alternative weekly.

Kshama Sawant, a socialist elected to the Seattle City Council last fall on a platform of a $15-per-hour minimum wage, says the proposal is a step forward, but notes that it contains numerous loopholes and could take more than a decade to come into effect. “If we don’t remain unrelenting, we’re going to get very little,” she says.

Under the mayor’s plan, which the council has to approve and can alter as it sees fit, workers will fall under one of four classes depending on the size of the business they work for, whether they get tips and whether the employer provides healthcare.

The proposal gives big business—defined as those with more than 500 employees nationally—three years to raise wages to $15 an hour, and four years if they provide healthcare. “Small” businesses, which cover more than 99 percent of businesses in Seattle and 70 percent of full-time workers, have seven years—until 2021—to get to $15 an hour if they only offer wages. If the employer offers healthcare or the worker earns tips, then those dollar amounts will be added to wages so their “minimum compensation” is $15 an hour by 2019.

Are your eyes glazing over? There’s more. The mayor’s communications director, Jeff Reading, says businesses must offer a healthcare plan at the Silver level or higher under the Affordable Care Act to count as paid compensation. As each group of workers reaches the $15-an-hour threshold, an annual cost-of-living adjustment of 2.4 percent will kick in. Finally, the minimum compensation will be phased out by 2025, and by which time, thanks to the cost-of-living adjustments, the wage floor is projected to be as $18.13 an hour. If this plan holds, it will outstrip the state’s minimum wage, which also has built-in cost-of-living increases and is projected to reach $12.08 an hour by 2025.

Murray said his proposal had the “confirmed support” of 21 of the 24-member Income Inequality Advisory Committee he set up last December to tackle the issue, including labor leaders. David Rolf, a committee co-chair and president of Service Employees International Union Healthcare 775NW, praised “my brothers and sisters from the labor movement and the business community” in reaching agreement on a deal that could benefit an estimated 100,000 workers in Seattle.

As to why the plan is so complicated, Rolf tells In These Times, “Our goal was to negotiate something that had business and labor support and the highest chance of moving through the City Council. The good news is that when all the scales are done, everyone hits the same point—approximately 18.13 by 2025.” He adds, “We have in the city a pretty vibrant restaurant scene that includes a lot of very small, minority and immigrant owned restaurants. … What we heard from responsible small businesses was not that they could never get to 15, but that they needed time to plan.”

Asked why profitable megacorporations like McDonald’s can’t afford to pay workers $15 an hour immediately, Rolf says that, “They undoubtedly could,” but “a purist position” would not have gotten a supermajority of committee support.

One committee member withholding support is Kshama Sawant, whom Reading says has made “a tremendous contribution to the dialogue” on income inequality. A leader of Socialist Alternative, Sawant got the ball rolling by making a $15-an-hour minimum wage the centerpiece of her successful run for Seattle City Council in 2013. Sawant says the Seattle campaign owes its success to the Occupy Wall Street movement, fast-food workers organizing nationwide for $15-an-hour wage and a union, and the ballot measure approved by voters last November for a $15-an-hour wage floor for hotel, restaurant and travel workers in SeaTac, a suburb of Seattle.

Sawant takes a nuanced view of the mayor’s proposal. She told In These Times that the plan reflects the fact that the “business and political establishment have lost the public debate on $15 an hour and they had to respond to it.” At the same time, 50 percent of the mayor’s advisory committee represents Seattle businesses, including two Chamber of Commerce representatives. Sawant says “through the Chamber, Starbucks got a seat at the table, but the workers of Starbucks didn’t get a seat at the table.” She says the committee “watered down the proposal as much as they could.” Sawant points to McDonald’s in particular, which generated $5.5 billion in global profits in 2013.

That’s the least of the worries of advocates for a robust $15-an-hour minimum wage. As tepid as the mayor’s proposal may be, it could be further weakened when the Seattle City Council gets hold of it. Sawant says, “Just because the Chamber of Commerce of Seattle is officially not opposing this proposal there’s no guarantee that some other lobbying organization that has all the money from McDonald’s, Starbucks, Koch Brothers might not come in” and try to defeat the proposal, fill it with more loopholes, or work to overturn it down the road.

Sawant’s concerns are not unfounded. Once the proposal goes to the City Council, Reading says the mayor “expects there will be changes. He added that “the overall framework of the deal announced today will likely remain intact.”

Even if the mayor’s proposal passes unscathed, many questions remain. What will happen to workers’ wages if a business adds or cuts healthcare that changes its schedule? Could a Burger King manager put out tip jars for employees and claim the tips count toward the minimum compensation? Given that fast-food corporations indemnify themselves from any legal responsibility for workers in their outlets, what if McDonald’s franchise owners claim they are independent small businesses and hence fall under the seven or even 11-year schedule?

For that matter, how will Seattle enforce these provisions? After the city criminalized wage theft in 2011, it failed to prosecute a single case for two years, despite City Council hearings last year where workers exposed “pervasive” wage theft in the fast-food industry.

For supporters of 15 Now—a community-labor alliance that Sawant helped found to keep the heat on the city for a wage boost—the battle is just beginning. Sawant has not endorsed the proposal, but neither does she dismiss it. “Any step forward in improving the living standard of the workers of this city is a victory for the movement,” she says, which means corporations will try to undercut a minimum wage proposal “in many ways [so] the movement should not stop.”

Sawant cautions that “it would be quite dangerous for us to assume this is a done deal.” The battle will move to the City Council as well as to the grassroots. On April 26, the 15 Now campaign held a national conference in Seattle attended by some 400 workers and activists. They voted for to push for a raise to $15 an hour that would begin January 1, 2015 for workers in businesses with the equivalent of 250 full-time employees or more and phase in over three years for businesses with fewer employees. The plan also differs from the mayor’s in having no tip credit and a narrowly tailored “opt-out” for unionized hotel and conference center workers who have negotiated an extensive low-cost health plan for them and their families.

The proposal is the same language as in a ballot measure already filed for elections in November. Sawant and other leaders of Socialist Alternative explained at the conference that the measure is one tactic in this ongoing skirmish. They are using it to pressure the City Council to pass a real $15 an hour proposal. If there are too many loopholes—what Sawant calls a “Swiss cheese” law—then they will push forward with the ballot initiative to get a better deal. To do that, they calculate they must gather at least 50,000 signatures by early July to make the measure official.

For Sawant and Socialist Alternative, the $15-an-hour wage is just the beginning. Their goal is to “build a grassroots base for other future battles. Fifteen dollars an hour is going to be a substantial improvement in people’s lives, but we need to build a movement to make a fundamental shift in society.”

Their next move is to start signature gathering for the ballot measure this month. Sawant says, “The city can be swarming with activists who by the act of collecting one signature have had one conversation with somebody that they didn’t know before, who may not have known so much about what $15 an hour means, and why the mayor’s proposal is weak, and why we need to fight back.” Having that conversation, she adds, “is what helps a movement blossom.”

These piece first appeared in inthesetimes.com