What the Pope and Linda Blair Have in Common 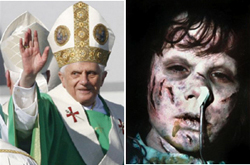 I have to admit it, Pope Benedict XVI is an atheist’s dream come true. Not only is he a former member of Hitler’s Nazi Youth, but he once headed up the Congregation for the Doctrine of the Faith, the modern-day version of the Inquisition (as in the mass slaughter of Jews and heretics.) He also used to lovingly refer to queers as “intrinsically evil.”

The former Joseph Ratzinger now has a new cause: Exorcism. As in the classic 1973 horror movie featuring Linda Blair as a young girl possessed by the devil. Obviously no one told the pontiff it was only a work of fiction.

According to London’s Daily Mail, Benedict XVI recently ordered his bishops to form exorcism squads in every parish (even San Francisco?!) to combat the rise in the practice of satanism allegedly encouraged by “rock music and the internet.” It seems that demonic possessions are on the rise.

Father Gabriele Amorth, who is billed as the Vatican’s “exorcist-in-chief” (I’m not making this up), explained it this way: “Thanks be to God, we have a Pope who has decided to fight the Devil head-on. Too many bishops are not taking this seriously and are not delegating their priests in the fight against the Devil. You have to hunt high and low for a properly trained exorcist.”

Added Father Paolo Scarafoni, who apparently goes around speaking on exorcisms: “We are being bombarded by requests for exorcisms.”

Perhaps church leaders should simply explain to the faithful that demons don’t possess people because they don’t exist. If one of their kids is listening to heavy metal and acting all weird, maybe it’s because he’s a teenager and that’s what they do.

Forget the Medieval props and the Latin mumbo-jumbo. Give the kid a few years and before you know it, he’ll be another corporate shill out to make as much as he can so that he can pay for the condo and the SUV. Now that’s demonic possession!

I have to wonder: What motivates a 21st Century Pope to cater politically to the most conservative element in his church, a bunch of Neanderthals that wants to turn back the clock to a bad old time when “witches” were tied to stakes and queer men were used as kindling for the fire. George Bush and company built their base of support among the fundamentalist Christian crazies in their party. Obviously, Benedict has done the same in his church.

In centuries past, Catholics actually believed that demons caused disease. Mental illnesses were signs that the devil had taken over their bodies. Ignorance reigned supreme.

Obviously, in Benedict’s church, it still does.