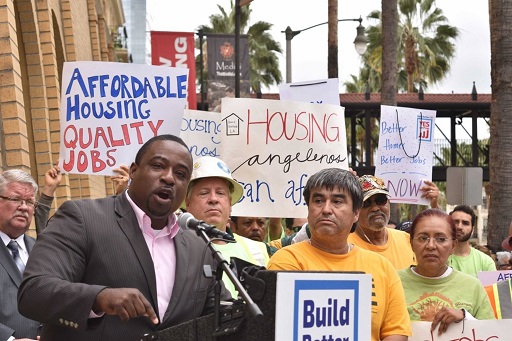 The November elections opened up new opportunities for national, state and local housing advocates. Here’s how activists can seize them.

The big money is federal. Advocates must go after it.

If Democrats already controlled the Senate we could quickly enact the House-passed Heroes Act and fund the stimulus package at much higher levels. But even if Republicans maintain Senate control, President Biden can extend and strengthen a national nonpayment of rent eviction moratorium.

Stopping millions of evictions is the most urgent priority. But solving the nation’s affordability crisis and ending homelessness requires a lot more. We need to aim high. We cannot be content with the small affordable housing funding increases we got in 1993-94 and 2009-10 despite Democrats controlling the White House and Congress.

We need to ensure Congress funds President-elect Biden’s plan to provide Section 8 vouchers to every eligible family. It is estimated that eleven million people eligible for vouchers do not get them, a major reason for ongoing homelessness in the United States. Biden’s plan requires a HUD budget allocation that the United States has not seen in inflation-adjusted dollars since the 1970’s.

Why has federal housing funding long been shortchanged?

A lack of power. Political power. Housing advocates have been out-mobilized for funding by other progressive constituencies. Presidents Clinton and Obama appointed great HUD officials— I described Obama’s 2009 HUD appointees as a “Dream Team”—but new funding was far, far less than what was needed.

It doesn’t matter who the HUD Secretary is if pressure is not placed on Biden and Congress to fully fund universal Section 8 vouchers. And much more.

First, the National Low Income Housing Coalition (NLIHC) built an over 1000 member coalition, Our Homes Our Votes, to mobilize pro-housing voters in the 2020 campaign. I expect NLIHC to now shift the coalition’s focus to win new national housing policies and dramatically increase funding. This gives up a mobilizing base to pressure Democratic Senators, Congress members and the President that we lacked in 1993 and 2009.

Second, Our Homes Our Votes pushed all of the leading Democrat candidates to produce housing policy positions. Biden’s has been described as “visionary.” Advocates have a document full of specific proposals that Biden can be held accountable for implementing—we lacked this under Clinton and Obama.

I expect NLIHC to announce its plans for a national campaign soon. If your group is not a member it should join. And if you are not part of a group, you can join as an individual.

It’s premature to discuss the specific political context until Senate control is decided in the two January 5 Georgia runoffs. But I disagree with claims that we can’t make huge housing gains with a GOP Senate. There have always been GOP senators willing to support housing. We only need one or two to win majority Senate support for a huge funding boost.

It really comes down to how hard activists fight. In 1993 and 2009 we didn’t see nationwide housing protests aimed at the President and Congress hitting America’s streets; activists are equipped to do this in 2021.

States don’t have the funding of the feds but can make policy changes that improve affordability. Among the key potential steps: ending state bans on local rent control laws in the blue states of Illinois (impacting Chicago), Colorado (Denver) and Washington (Seattle). Oregon did this in 2019.

Advocates in California and other states will renew efforts to increase housing density via state legislation. Far too many “progressives” need to stop worshiping at the altar of “local control.” Local control allows Bay Area cities like Alameda to ban new apartments. A ballot measure that would increase the city’s racial diversity by allowing apartments lost 60-40% last week..

Allowing localities to practice racial and class exclusion is not “progressive.”

It’s premature to assess what other state strategies to increase density will emerge. But as national Democrats push for a package to address climate change, blue states will be under increased pressure to  promote infill housing.

I strongly encourage advocates in all blue cities to take a close look at Cambridge’s 100% Affordable Housing Overlay. Every city should pass such a measure in 2021. It avoids the progressive opposition to upzoning for all types of housing and is a political winner. Contact A Better Cambridge to get the full background.

I would also encourage cities (like Seattle) to try to get their election cycles changed to end lower-turnout off year elections. This shift, which I strongly push in Generation Priced Out, has already made a huge difference in Los Angeles.

With the Biden campaign pledging to end racist and elitist exclusionary zoning laws, 2021 might be a good time for major blue cities like San Francisco, Seattle, Denver and Los Angeles to do this locally. Biden’s pledge to stop cities from receiving Community Development Block Grant funds unless they have inclusionary zoning laws could force local “progressives” to go along (Donald Trump promoted single-family zoning as part of his plan to “save” the suburbs. Trump’s plan was not “progressive.”).

Activists should also push cities to open affordable housing opportunities in more affluent neighborhoods. This means stopping blue cities in particular from segregating low-income people of color by restricting affordable housing to certain neighborhoods; those with Black Lives Matter signs in their windows need to walk the talk.

There’s plenty to do. And I’m more optimistic about winning federal gains than I have been in decades. So enjoy the moment, recharge your batteries,  and get ready for a very active 2021.