What Really Happened to GMO Labeling in Washington 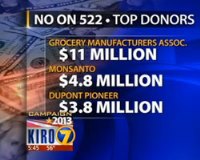 Monsanto and the junk food industry teamed up to shatter Washington state records. They dumped more than $22 million into fighting against GMO labeling. Exactly $550 of the “no” campaign’s dollars came from inside Washington State. This was a classic example of out-of-state corporate interests pouring massive money into maintaining control of our food systems. And based on returns so far, it looks like a campaign full of misleading ads and laundered money may have done the trick.

There are still hundreds of thousands of votes to be counted, and it will be several days before we have the final results. But with over half of the ballots counted, the “no” side was winning with over 54% of the vote.

The pattern in Washington has been very similar to what happened to California’s proposition 37 a year ago. Early polling found the initiative way ahead – consistent with national polls which find that a huge majority of the American public supports labeling of GMOs.

But then the misleading ads started pouring in.

The anti-labeling ads that blanketed Washington’s air waves recycled the same themes, and even some of the same content, that had been found most effective in California. They also included some extremely dubious statements.

The “no” ads told Washington voters that Initiative 522 contained all sorts of exemptions and special interest loopholes. And it is true that there were exemptions in the law for restaurant and medical foods. But these exemptions, far from being special interest loopholes, are consistent with generally recognized labeling standards practiced nationally and globally. Are we really supposed to believe that the “no” campaign thought the trouble with I-522 was that it was not strict enough?

The largest single donor to the “no” campaign, the Grocery Manufacturers Association (GMA), is currently facing a money laundering lawsuit from the state Attorney General. They channeled more than $11 million into this effort, and tried to hide their actual donors from the public. It would appear that companies like Coke and Pepsi wanted to keep us all in the dark, but did not want to face a consumer backlash so they tried to use the GMA as a cover.

The attorney general’s lawsuit generated some degree of disclosure, but the damage from millions of dollars in outside spending of laundered money had been done, and the legal proceedings, which seek punitive damages, will not be complete until months after the election is long finished.

What the GMA’s shenanigans tell us is that a growing body of companies fear consumer backlash if they oppose GMO labeling. Monsanto may not care, since they don’t sell direct to the consumer anyways. But with a lot of “natural” brands like Odwalla, Kashi, and Naked Juice owned by companies like Coke, Kellogg, and Pepsi, there is a growing fear that boycotts could hit their bottom line.

The non-GMO certified food sector has grown from nothing to $3.5 billion in sales in just the last three years. Whole Foods has reported a sales bump of 15% to 30% when products are certified non-GMO.

Consumer pressure, then, may be able to accomplish what ballot initiatives have not yet achieved. If non-GMO products can establish a stronger footing in the marketplace, and if companies (including “natural” brands) face boycotts when they or their parent corporations attempt to keep consumers in the dark, then the tide could turn very quickly.

Here’s an infographic highlighting some of the top companies that opposed, and supported, GMO labeling in the state of Washington.

Labeling initiatives are underway in at least 20 more states. Monsanto and the junk food industry may have managed to keep Washington voters in the dark a little longer. But it is going to be hard keep convincing the American people that we don’t want to know how our food was produced.

This piece first appeared in commondreams.org