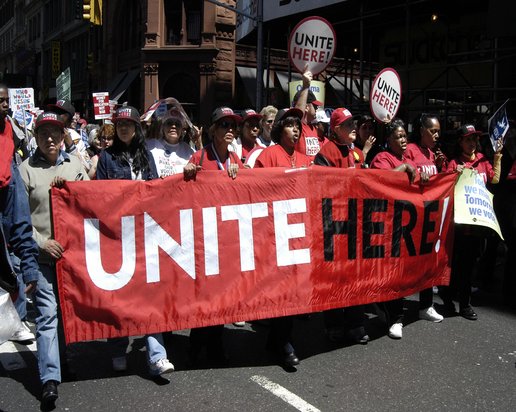 Our union represents more than a quarter million hotel, food service and gaming industry workers who make at most $50,000 per year in wages and benefits. The majority of UNITE HERE’s members are women and immigrants. Most drive modest family cars–not Cadillacs–if they have a car at all.

Employer provided health insurance with low premium and out of pocket costs is an essential part of a decent job and a stable family. Every penny counts, and people who clean rooms and cook food for a living can’t afford $5,000 or $10,000 deductibles and higher copays.

Members of our union are not terribly interested in partisan politics. We fight for our families, for fair pay, and a just and equal society regardless of party label. We fought hard to help elect President Obama on the promise of expanding coverage for the uninsured while keeping the healthcare we have, as the President promised.

We now know that promise was false. And every day proves the claims of ACA supporters about other parts of Obamacare equally false. In particular, Obamacare will impose a 40% excise tax on health plan costs above $10,200 for individuals and $27,500 for families in 2018. A bevy of Democratic academic heavyweights – Gene Sperling, Larry Summers, Jonathan Gruber and Jason Furman – have made a series of false or unsupported claims to support the idea.

The staunchest defender may be former economic advisor to Vice President Biden Jared Bernstein. In a recent Washington Post column, Bernstein admits that maybe the facts aren’t lining up the way the theory says they should. Yet, he keeps rehearsing these theories to defend the tax, which is now subject to bipartisan repeal efforts.

Here are four such misguided theories about the so-called “Cadillac” tax.

Myth #1: The Cadillac Tax will have a limited impact. Bernstein says the tax will only affect 4% of health plans in 2018. By contrast, an October study from the International Foundation of Employee Benefit Plans found that 60% of employers expect to trigger the tax in 2018. More importantly, 68% of all employers have already changed, are changing or plan to change their plans to avoid the tax.

So how are employers dealing with this? According to the study, 45.5% are shifting costs to employees, 38.5% are moving to high deductible plans (i.e. more cost shifting), and 33.1% are reducing benefits. The Congressional Budget Office economic outlook even states that “the CBO and JCT expect that premiums for health insurance will tend to increase more rapidly than the threshold for determining liability for the high-premium excise tax, so the tax will affect an increasing share of coverage offered through employers.”

Myth #2: The Cadillac Tax will help healthcare costs go down. Not to worry. Bernstein says that employers may “negotiate for lower costs” rather than shift costs to workers. Negotiate? With whom? For years, large national employers have been attempting to control health care costs for years. Moreover, partly because of the ACA, insurance companies are buying each other up so fast ($72 billion for two mega-deals this year alone) that, by federal standards, 72% of U.S. metropolitan areas have too few insurers left for real competition.

Myth# 3: The Cadillac Tax will raise wages. Bernstein and Co.’s biggest deceit is the notion that as employers cut health care benefits, they will pass on premium “savings” to employees through increased wages.

We’ve tested this idea for 10 years. Worker premium contributions and deductibles have grown 3-4 times faster than worker pay since 2005. If employers really do raise wages when they increase out of pocket costs, shouldn’t we all have gotten a big raise long ago?

Myth #4: The Cadillac Tax will raise $91 billion dollars. Building on the last questionable theory, Bernstein and other Cadillac Tax defenders have also argued that workers, flush with raises, will flood the Treasury with new income taxes for Obamacare subsidies. There is no factual basis for saying the 8-year projections that the 40% tax will raise $91 billion (a number that has changed three times), since the phantom wage increases account for three quarters of this estimate. If the theory that employers shift premiums to wages is right, given the last decade’s massive real-life cost shift, hasn’t the IRS long since collected that $91 billion for subsidies?

With the substantive case for the 40% tax collapsing once seen in the light of day, Democrats are changing the subject. Now, Bernstein tells us, the “political point” is “more salient” than the facts. We can’t let the enemies of Obamacare “win” no matter how hard middle class families get hit.

This is why Americans detest Washington. In the minds of wealthy Democratic academics, the 270,000 cooks, hotel housekeepers and food servers in our union should just take one for the team in lost benefits, increased taxes and poorer healthcare to score partisan political points.

It’s a simple idea: American workers cannot afford higher health costs. But Bernstein and his White House cronies have ignored it and spent 6 years accusing anyone looking for responsible fixes to ObamaCare of wanting to repeal the whole law for their own partisan political reasons. That’s just dishonest.

There is nothing Cadillac about hospitality workers. Mr. Bernstein and his cronies may dazzle their millionaire lobbyist friends with their theories, but I would love to have them come to the shop floor and explain the benefits of the Cadillac Tax to members of our union whose annual wages are a third of what Larry Summers makes for a single speech. Maybe they’ll donate their fees to help workers who will have to choose between groceries and taking their kids to the doctor when their costs go up.

Another election cycle is upon us. Democrats in particular will ignore fixing ObamaCare to their peril at the ballot box. That is not something we wish for. It is just a fact.