What Japan can teach us about school lunch 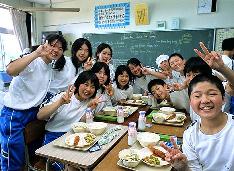 A recent article in the Washington Post about school lunch in Japan is a must read for anyone interested in improving school food in the US. Not because the Japanese model presents a quick and easy fix to the multiple problems plaguing school food in this country, but rather because it highlights the many differences between how the subject of school food is handled in Japan, and how it is handled here.

What’s for lunch in Japan?

“Schools in Japan give children the sort of food they’d get at home, not at a stadium. The meals are often made from scratch. They’re balanced but hearty, heavy on rice and vegetables, fish and soups…The food is grown locally and almost never frozen.”

Where is lunch eaten?

“Mealtime is a scene of communal duty: In both elementary and middle schools, students don white coats and caps and serve their classmates. Children eat in their classrooms. They get identical meals, and if they leave food untouched, they are out of luck: Their schools have no vending machines.”

“Barring dietary restrictions, children in most districts can’t bring food to school, either, until they reach high school.”
What is the prevailing attitude towards school lunch?

“Children are taught to eat what they are served, meaning they are prone to accept, rather than revolt against, the food on their plates. But Japan also invests heavily in cultivating this mind-set. Most schools employ nutritionists who, among other tasks, work with children who are picky or unhealthy eaters.”

What is the cost, and who pays for it?

“Municipalities pay for labor costs, but parents — billed monthly — pay for the ingredients, about $3 per meal, with reduced and free options for poorer families.”

Freshly prepared, locally grown food, heavy on rice, vegetables, and fish, which the children happily consume, and which cost parents only $3? How is that possible? Financially, it works because the government is covering all of the cost of labor, which is primarily cooking, since the children are serving the meal. That $3 the parents pay goes entirely for the cost of the food itself.

By contrast, the typical US school meal program spends about 45% of its budget on labor and benefits, and about 9% on overhead like delivery costs, pest control, and bank fees, leaving only about 46% for food, according to the USDA, which oversees school meals,

So while parents in SF also pay $3 per lunch (and the state and federal government payment for a low income student’s “free” lunch is $3.16), less than $1.50 of that $3 is available to pay for food. The new fresh school lunches from Revolution Foods which SFUSD began serving in January cost the district $1.95 per elementary lunch, plus about another 25 cents for milk. The fact that there is less than $1.50 in the budget to cover the $2.20 combined cost of food and milk helps drive the approximately $2 million deficit which SFUSD Student Nutrition Services incurred last year, and which threatens to go much higher this year with the new pricier fresh meals.

Because children in Japan are not generally allowed to bring lunch from home before high school, there is no stigma attached to eating school meals, because all the students eat them. Lunch is served in their classrooms, so there is no “walk of shame” to the cafeteria for low income students to get a free lunch, and everyone gets the same meal, with no “a la carte” choices for those with money to purchase them, and no vending machines to enable skipping lunch and gorging later on snacks.

With virtually all non-low income students purchasing school lunch, far more revenue flows into the Japanese school meal program than happens in most US school districts; the USDA reports that less than 50% of non-low income US students typically purchase a school lunch.

Finally, and perhaps most importantly, Japanese children are expected to eat what they are served, without complaint, but also educated to help them understand why they should be happy to eat the healthy food. This is called “Shokuiku” – “shoku” meaning food and diet, and “iku” meaning growth or education. After a 2005 report warned that Japanese children were developing poor eating habits that would lead to higher rates of obesity and diabetes, the Basic Law on Shokuiku was enacted to help all Japanese, especially children, to understand and value healthy eating habits, including a traditional Japanese diet.

In American schools, we call this “nutrition education”, and it is one of the programs which suffered cuts when Congress passed the emergency extension of the farm bill on New Year’s Day.

Japan isn’t the only country way out in front of America when it comes to both the quality of school lunches and prioritizing the meal period as an important part of the school day. Georgeanne Brennan and Ann M. Evans have been school lunch consultants in California for over a decade. In the fall of 2011, they took a fact finding trip to France to learn about French school lunch. Their report reveals many of the reasons why school lunch in France, like school lunch in Japan, is far superior to school lunch in America.

What’s for lunch in France?

Brennan and Evans describe middle school students “taking first a salad of mixed greens with slivers of chicken and several slices of chorizo, dressed with a mustard vinaigrette, and next choosing between fillet of fresh Atlantic Pollack, a type of cod, roasted with cherry tomatoes and zucchini or braised beef with mushrooms, accompanied by boiled, parsleyed potatoes and optional self-serve hollandaise sauce. Next they served themselves slices of cheese, bread, and an apple tart or piece of fruit. We watched as they settled down at their tables, each with a pitcher of water, and quietly conversed and laughed as they ate their lunch.”

“Students can go home for lunch or eat the lunch provided by the school. Bringing your own lunch from home is not an option.”

How long is the lunch period?

“The eating time is required by the Ministry of Education to be no less than 30 minutes. The elementary schools typically offer recess prior to lunch as well as after lunch, for a total of 1.5 – 2 hours. Schools days are typically longer, often going to 4:30.”

What is the cost, and who pays for it?

What is the prevailing attitude towards school lunch?

“Our impression is that the French school lunch is more than a meal. It is a concerted effort by federal, regional, and local governments to teach and to model the pleasures of freshly cooked real food, the discovery of different tastes and flavors, and to promote civil discourse around the table. To the French, the school lunch experience is not only a valued part of their children’s educational day; it is part of learning the national culture.”

As in Japan, the price non-low income parents pay for their child’s school lunch is expected to cover only a small portion of the full cost of providing the meal, with the government picking up the balance. Also like Japan, French children do not bring lunch from home, although the lunch period is long enough that students can go home and have lunch with their families. With recess both before and after lunch, and a mandatory half hour for sitting at the table, French school lunch is a peaceful and enjoyable experience, unlike the “hurry up rush rush” atmosphere so common in American schools, where lunch and recess combined usually lasts less than an hour, and some schools have no recess at all. Finally, as in Japan, school lunch is viewed as an opportunity to learn about and appreciate food, and to reinforce the national culture.

American school lunch, which despite recent government-mandated improvements is still largely a pizza/hot dogs/burger/tacos experience in most schools, may be said to reinforce our national culture too, but it is a culture of fast food, of segregated lunch lines with low income children lining up for a free meal while their wealthier peers buy unregulated a la carte junk food, or rush off campus for a quickie snack from a nearby convenience store. It is a culture that pretends schools can serve up a healthy meal and pay workers a fair wage for a total cost of $3 per lunch, where government officials believe that cutting funds for nutrition education is a fair tradeoff for maintaining commodity crop subsidies for Big Ag, and where those working towards healthier food or fewer empty calories are derided as “the food police.”

What can we learn from other countries about school lunch? How about this – you get what you pay for. High quality healthy food costs more than cheap processed junk; a lunch that nourishes both body and soul cannot be created from ingredients costing a dollar and change; a respectful attitude towards eating and food is not promoted by a 15 minute lunch break; and no one benefits when school lunch policies segregate students by income. Until this country is willing to invest the kinds of resources, both financial and educational, in school meal programs that countries like Japan and France do, this is just another area where US schools will lag behind other countries.