What Goes Up Shouldn’t Always Come Down 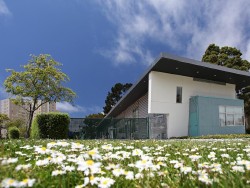 I wonder sometimes why development companies wonder why neighborhood organizations tend to loathe them. Duh. It’s because development is still often done so poorly, and so often at a huge cost to the taxpayer and ridiculous profits for the developers. Parkmerced Vision would be among those projects. This four-phase development plan would almost triple the number of residential units in this southern neighborhood of San Francisco flanking San Francisco State University. Revamping neighborhoods isn’t necessarily a bad thing, except that Parkmerced Vision calls for the demolition of the attractive two-story buildings that make Parkmerced a reasonably attractive place to live, and the preservation of those ugly towers, which draw incessant complaints about mold. Among many details, there are plans to alter transit routes, create a retail center, and build an organic farm (?), which again are not necessarily bad. But I worry when Phase 3 of the Vision, for example, includes the demolition of a lauded custom-built preschool at 80 Juan Bautista Circle.

Most often, preschools operating on a shoestring budge stuff themselves into whatever cheap space might be available – a room in a church, an office, or a basement. How then did Montessori Children’s Center (MCC) come to occupy the new striking angular building facing a huge grassy circle where the kids can play after hours, elderly can stroll, and college kids can skateboard to class? Montessori Children’s Center is a unique place fought for, conceived, planned for, designed and built by local talent. Its creation has involved a long list of private and public figures, and a long struggle.

From 1976-2004, MCC occupied a building at 755 Font Boulevard on the west end of the Parkmerced campus. The building wasn’t pretty or even practical. To get to the playground, for example, the preschoolers had to walk across 1000 feet of rough cracked pavement, also occasionally traversed by fast-moving vehicles. Nevertheless, MCC was flourishing there, teaching hundreds of the youngest learners from San Francisco State University (SFSU) faculty and students, Parkmerced, Sunset and many other distant city neighborhoods.

In 1999, San Francisco-based Carmel Partners and JP Morgan bought Parkmerced and named their venture Olympic View. In assessing all aspects of its new investment, property manager Bert Polacci was asked to initiate a dialogue with MCC regarding the lease of the space. When that dialogue failed, Olympic View issued a 30-day notice. Ms. Flynn mobilized her forces. That very night, a picture of the 30-day notice appeared on all of the local news stations as evidence of a big development company kicking a little preschool to the street. Having protected the parents of her students until this point, now Ms. Flynn asked for our support (my daughter was a four-year old MCC student). We wrote letters and made phone calls. Even residents of Parkmerced who didn’t have children called. One parent called the Denver Post, which lambasted the intentions of the Denver-based parent company of Carmel Partners.

Ms. Flynn called on her political contacts, too. She had many, as she had been and continues to be involved in policy-making regarding early childhood education. Then Supervisor Tom Ammiano called a special hearing. We parents marched on City Hall before the hearing. Then we waited patiently for our turn to speak before the supervisors, as our children pawed at us impatiently. Among those comments were questions. Did San Francissco want to be truly inclusive of all peoples, parents and kids included? Was it ready to lose scores of the creative types, for example, that it values so much all because it was unwilling to realistically weigh their desire to have children in this diverse and vibrant place against their modest means? What would the city do to make this a place where they could raise their children?

The Supervisors listened. They were sensitized to the topic because for many years child advocates had been pushing for more child-friendly policies, the results of which are readily apparent today (see sidebar.) On June 5, 2000, the Board of Supervisors unanimously adopted two resolutions urging Olympic View to “reconsider the eviction of the Montessori Children’s Center to engage in meaningful
negotiations … to save the school.” One resolution noted that the school had enrollment of 50 children representing 17 different nationalities, and accommodated at least five CALworks recipients. MCC, “where children learn to learn” was educating hundreds of little kids, not just babysitting them.

The relationship between Olympic View and MCC continued to be uneasy over the next few years. MCC would rather avoid uprooting its operation. Olympic View wanted to avoid another PR debacle. Increasing pressure on Olympic View was a new deal with SFSU in which the university agreed to buy the property under the condition that it could occupy it within two years. It needed a place for the women’s softball team to practice as soon as possible.

Olympic View decided it would construct a new building especially for MCC. Based on its economical design and promise to meet an aggressive timeline, Mark Horton Architecture (San Francisco) was awarded the building project.

Project Manager, Chris Roche, read numerous books by and about Maria Montessori and her internationally known and loved teaching method. Montessori reminds us while “Nature lays down a plan for the construction both of personality and social life, this plan becomes realized only through the children’s activity when they are placed in circumstances favorable to its fulfillment.” The challenge was to create a space that would encourage children’s inborn desire to learn.

The architects observed the classrooms, mimicking Montessori who based every idea she developed about childhood learning primarily on years of observing children doing what they naturally do. Montessori understood child’s “play” to actually be what we adults think of as work. It’s how they come to master their environment, Montessori was an anthropologist by training.

In light of Montessori’s emphasis on children’s special relationship to the natural world, the importance of the senses in learning, of patterns in learning math, and centrality of movement, Roche’s team proposed a radical design. For example, the outside play/work area would be literally indistinguishable from the indoor play/work area.

Childcare licensing and a limited budget made many of Roche’s innovations untenable. However, the final design does indeed encourage children’s relationship with Nature simply because it’s impossible to avoid the expansive sky and greenery right outside the sliding doors that run half the length of each classroom. Natural light floods the space through the southern-facing façade topped by a sloping roof. When it’s time to play outside, teachers simply open the door, and the kids flow out. The playground encompasses a grassy area, a generous sandbox, climbing structure, paved area for tricycles, and a small garden – all meant to enhance the benefit of being outdoors.

Inside, children freely move about the classroom. They observe and help the teachers prepare food in the kitchen nook. A four-foot wall separates the bathroom area from the classroom, so teachers can note if a very young child needs help with toileting (MCC is one of the few preschools in the city to take kids who are not potty-trained.) Short desks and shelves make the unique Montessori equipment attractive to the children who choose their own “work” or project everyday.

MCC is one of fifty schools (and only two American ones) included in the beautiful compendium Preschools & Kindergartens (Links, Barcelona, Spain 2006), an irony considering that the building would be demolished in 15 years if the building’s owner Stellar Management carries out its controversial four-phase redevelopment plan of Parkmerced. Polacci is quick to add that a new multi-story building would accommodate an elementary school as well as MCC. Stellar Management recognizes the contribution of MCC to the community. However, given the ambitions of the redevelopment project, it’s hard to believe that Stellar Management would invest in an equally inspiring building.

Picture again the preschoolers at MCC. They are working on their little projects on the floor or at pint-size desks in the building that Mark Horton’s firm designed. Perhaps one of the kids is humming or watching a bird fly by outside. Maria Montessori teaches us to allow children as much time as they need – days, if necessary – to complete a project of their choice, as long as they actually complete it. You know now that the toil of many different parties – parents, teachers, businessmen, bankers, architects, engineers, and politicians – made this unique kind of learning in this fine architectural space in this very livable community possible. Now that it’s up, do we really want to allow it to come down?

Vicki Inglis has lived and worked in San Francisco for 20 years. She can be reached at v_inglis@earthlink.net or at http://www.vickiinglis.com.